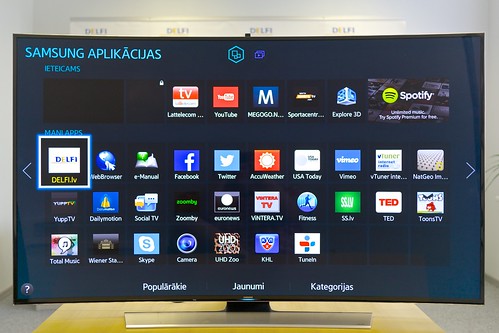 Smart TVs are the creme of the TV universe, but they may be offering more than users are willing to receive – and not in a good way.

South Korean electronics giant, Samsung, has come out with a caveat to its smart TV users – to be careful around their gadgets. Why? The smart TV isn’t just sitting there being watched, it’s returning the favour. Essentially, your television could be spying on you.

A clause in the TV’s privacy policy warns users to act civil when around their TV. “Please be aware that if your spoken words include personal or other sensitive information, that information will be among the data captured and transmitted to a third party.”

This warning, sandwiched within privacy agreements we never read, was red-flagged after it was first reported on The Korean Times and picked up on social media, where commenters – who didn’t come up with quirky ripostes – have mostly opposed the feature.

Hey #SamsungSmartTV guess what I will never be purchasing? You!!! How dare you listen in on customers! @Samsungtweets http://t.co/f82HIne6Bh

So, I guess all those new #SamsungSmartTV retailers will be getting a lot of returns soon. — anthony quartararo (@tonyquartararo) February 9, 2015

I’mma just go on the record: if #SamsungSmartTV wants to listen to the conversations I have with my cats – feel free. #singlelife

The TV offers options to disable the voice recognition capability, but then, Samsung says though “[It]will not collect your spoken word, Samsung may still collect associated texts and other usage data so that we can evaluate the performance of the feature and improve it.”

There are concerns that data collected by Samsung via the feature may be stored and mined and will, but the tech giant in a report on CNBC has to come out to say that it does not retain voice data, nor sell it to third parties.

Supposedly, more than 140 million smart TVs will be sold worldwide this year, and more than half of TVs sold are now ‘smart’ models. Samsung says the feature and its trappings are industry standards, raising the question as to whether other electronics companies are doing same.