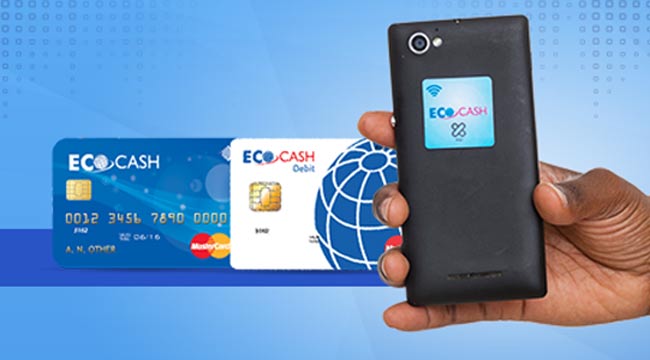 Zimbabwe’s Econet Wireless has introduced a NFC-enabled sticker with which users can transact at any enabled point of sale through their mobile money accounts. The service is named the EcoCash Ta!, a play on the tapping action made when someone uses the service.

NFC, which stands for near-field communication, lets two devices exchange information when they are in close proximity, without the need for a mobile network. The stickers have a chip embedded in them, and have been priced at $1.

The sticker is synced with the user’s mobile money wallet, and users tap it against a micro Point of Sale (POS) device when they make a purchase. The amount transacted is deducted from the user’s EcoCash wallet. This service has a daily transaction limit of $1,000, and no PIN is required for payments of $3 or less.

This is not Econet’s first foray into near-field communication. At the 2015 Beyond the Phone Expo held in October, the mobile operator unveiled its NFC-enabled debit card, the EcoCash Express Debit Card, which allows users to pay for goods by tapping the card against a compliant Point of Sale (POS) device.

The EcoCash Ta! has been introduced as a point of sale option for vendors and merchants. According to Econet, more than 500 vendors, merchants and agents have already signed up to use the service to accept payments.

Mobile money in Zimbabwe has experienced dramatic growth,with transaction volumes driven by both formal and informal trade. Econet hopes to use this to push adoption of its payment services in the local market.

The target market for EcoCash Ta! is small scale traders, merchants and vendors. Collectively, this segment is handling a large haul of the limited cash circulating in Zimbabwe.

“It is a safer and convenient option for many vendors who have to carry cash with them, which increases risk of theft. EcoCash Ta! will benefit vendors selling airtime, fruits and vegetables, potentially opening a new avenue for employment creation in a country where many people are surviving on informal trading,” said Douglas Mboweni, the CEO of Econet Wireless Zimbabwe.

Near-field communication has been used with varying levels of success in other countries. In Kenya, adoption of NFC has been slow, with banks generally shunning the technology in favour of more mainstream chip-and-pin cards.

NFC did feature in public transport cards, which were meant to replace cash as a means of payment in Nairobi. This technology found limited success with Google and Equity Bank’s  BebaPay card, which was quietly shuttered in March.

The potential for EcoCash Ta! and its sticker-based system lies in the fact that it removes the need for a bank account, since it is linked to Econet’s mobile money service. This raises the possibility that the technology could be applied in places without access to banks in countries with robust mobile money systems.