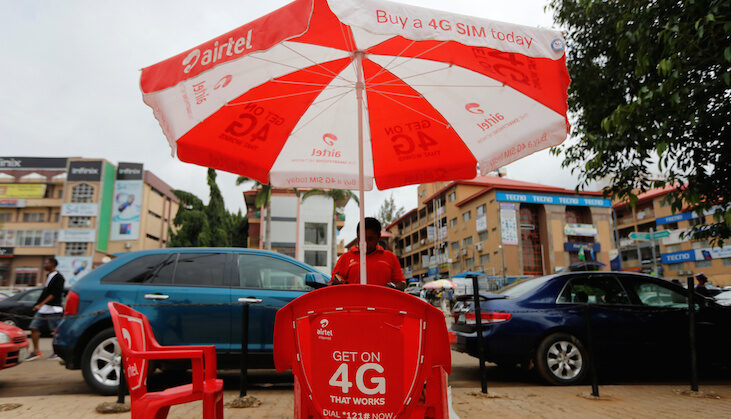 The logo of telecommunications company Airtel is pictured on an umbrella and chairs set up by vendors in Abuja, Nigeria July 9, 2019. REUTERS/Afolabi Sotunde.

Airtel Africa has posted revenue of $899 million for the first quarter of 2020. The company recently announced its Q1 2020 earnings showing its revenue is up 15% from the $781 million it posted in March 2019.

Intermediately-owned by India’s Bharti Airtel, Airtel Africa is one of the biggest telecom companies on the continent. It operates in 14 African countries, providing voice, data, tower and mobile money services to a customer base of over 110 million people.

In its latest quarterly report, Airtel disclosed that voice services account for the largest share of its revenue. Voice revenue stood at $510 million for the first quarter of 2020; that’s a 5.9% growth over the previous year. Much of that revenue comes from its Nigerian market where Airtel has 41.8 million mobile subscribers. In the West African country, voice revenue grew 16% and accounted for $234 million in the company’s voice revenue during the period.

Airtel’s voice revenue from its francophone and East African markets grew slowly at 10.3% and 6.7% respectively.

While the overall importance of voice remains clear, the pandemic is having an immediate impact, Airtel wrote. It told investors the economic effects of the pandemic and government lockdowns have impacted “customer behaviour” and lowered disposable income.

The company did not explain further on this, saying “it is difficult to precisely forecast what the impact of this will be on customers and business.”

“However, our performance during the month of April has been resilient as the business continued to deliver constant currency revenue growth, although at a lower rate.”

That optimistic outlook is down to one thing: data traffic.

Since the start of the year, Airtel’s data revenue is in growth territory. The company’s data revenue jumped 35.6% in Q1 2020 as it pulled in $253 million. With millions of people working from home and using data services, voice calls and revenue are dropping for many telcos.

A few telcos have made early predictions that the recent growth in data services will not immediately offset declines in voice revenue. Airtel believes the reverse will happen.

It has “already seen an increase in data traffic” since the outbreak of the pandemic, and believes “increase in data and mobile money revenue growth [will] more than offset revenue decline in voice.”

Across its 14 markets, it has added 2.6 million new data subscribers since December 2019, bringing its total active subscriber base to 35.4 million.

While this figure looks small, it doesn’t tell the full story. In important markets, Airtel’s pivot to data came late. In Nigeria, the company launched its 4G solution in 2018, two years later than rival telcos. MTN Nigeria, Glo, 9Mobile and even Smile, all had 4G services in Nigeria by 2016.

Airtel plans to intensify this growth. Despite the pandemic and possible revenue challenges, it will spend between $650 million and $700 million annually developing its data infrastructure over the next 12 months.