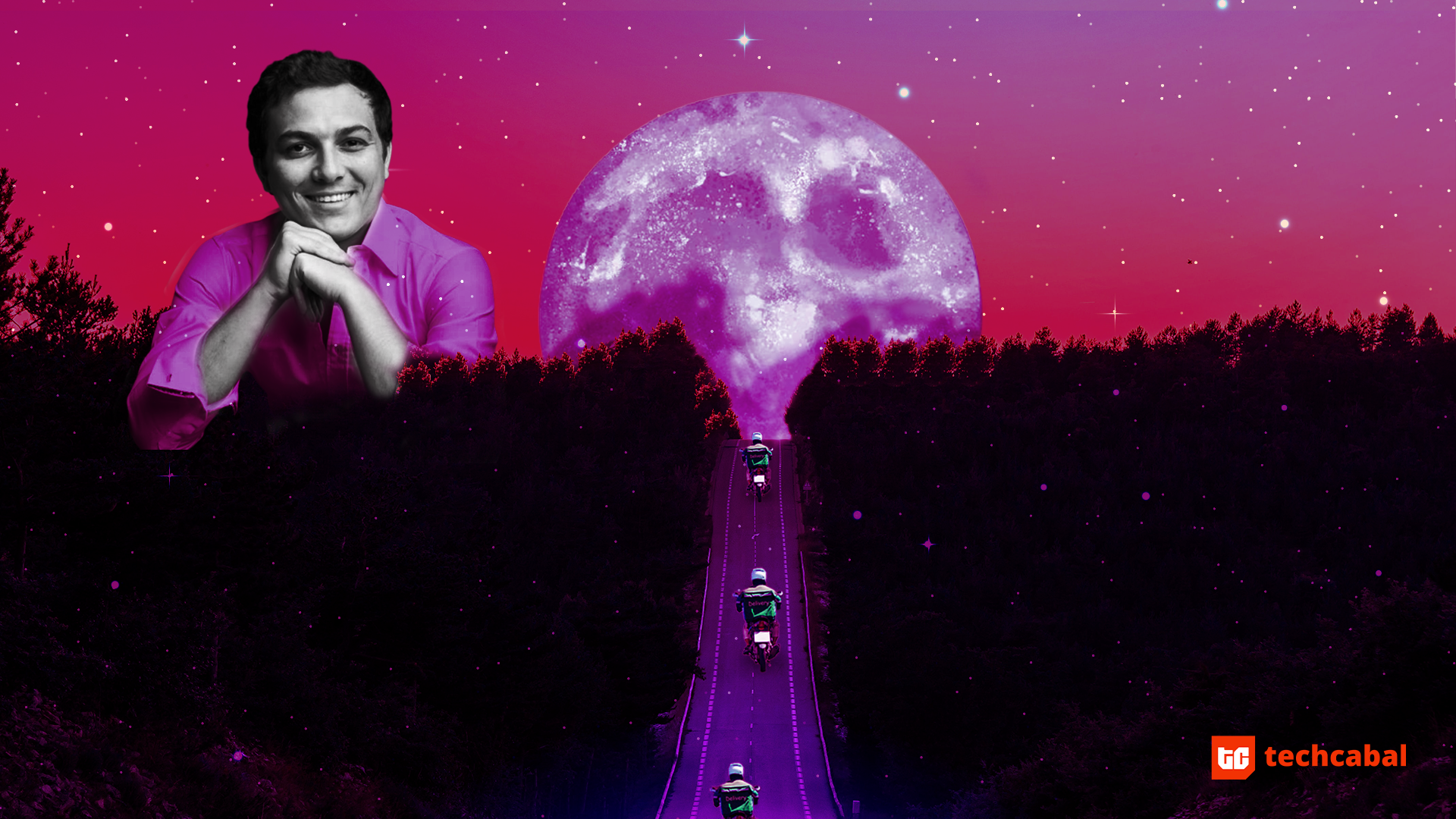 Last November, during the Ironman marathon race in Turkey, Ismael Belkhayat—just a few steps to the finish line—excitedly took a minute to kiss his family, then, joyously sang and danced through the finish line.

Ironman is one curious endurance competition: there’s no award for finishing ahead of others; everybody who finishes is recognised as a winner. For Belkhayat, who has since adopted Ironman as his alias, competing at the sport can be likened to building a business. It takes guts, grit, and, most importantly, making strategic decisions on how to ration your strengths.

Belkhayat is not an athlete. He only heard about the race a few months before it commenced and decided to participate; that’s all that mattered to him—knowing what you want and going out to get it.

This was the attitude that inspired him, 8 years ago,  to quit his strategy consulting job at Boston Consulting Group (BCG) to become a tech entrepreneur—something he knew little or nothing about.

Three startups later, this shy kid from the streets of Casablanca has not only become one of Morocco’s most revered entrepreneurs but also a notable name in the North African tech ecosystem.

Ten years ago, running the Ironman race or founding a startup wouldn’t have crossed Belkhayat’s mind. He was just another man who was going to follow the conventional playbook of life: go to school, finish with good grades, get a well-paying job, and start a family. Even though he’s always had a sharp mind, he never thought he could be the outlier he is today.

The birth of a serial founder

“I was 27 years old and it felt like I’d been snoozing all my life. I woke up from my slumber when the guys at BCG told me I’d have to work another 10 years to become a partner,” Belkhayat told TechCabal.

Belkhayat grew up in Morocco, where he had his early education before moving to Paris on a state-sponsored education trip when he was 17. After graduating from the university prep school in Paris, he won a scholarship from the Moroccan government that helped him through his education at Cornell University in the US. He then joined BCG’s Paris office and was later transferred to Morocco to help set up the company’s practice in the Maghreb country.

After working for BCG for over 4 years, that 10 years time frame given by his senior colleagues jolted him into finding a new meaning to life and his career, so he turned to tech entrepreneurship. The same year he left BCG, he founded VotreChauffeur, a ride-hailing startup operating in Casablanca and a few other Moroccan cities.

The startup quickly became a household name in the country and, after about four years, was acquired for an undisclosed amount by Avis Car Rental. Belkhayat continues to serve as a board member in the company.

One thing Belkhayat prides himself in is the ability to quickly focus on the next important thing rather than wallow in the glory or loss of the past. While still running his first startup, he founded another one, Sarouty, a marketplace that facilitates real estate deals in Morocco. Sarouty helps people to discover, buy or rent land and houses across Morocco.

Belkhayat’s core mantra is to grow as fast as possible and overwhelm the competition between the first 2 years in business. So, like his first business, Sarouty quickly became the leading real estate platform in the country. It partnered with PropertyFinder Group, a Dubai-based multinational proptech startup, to scale its tech and expand to more cities. Due to the potential of the business, PropertyFinder opted for acquisition instead of partnership and named Sarouty as its Moroccan operation. Belkhayat then exited to act in the capacity of board member.

What’s next after two exits?

The next idea came during a trip; Belkhayat had chosen to accompany his wife Sophia Alj, ex-strategy consultant at McKinsey, during a business trip. Alj was going to travel across Africa—South Africa, Nigeria, Egypt, Ivory Coast, etc.—to help in the digital transformation of some FMCGs in these countries.

During the trip, Ironman and his wife noticed one common thing across these countries: their mom-and-pop shops struggled to access FMCG products. But what was more fascinating was the rise of an entirely new tech sector building to solve this particular problem at scale.

“We heard about TradeDepot in Nigeria, Sokowatch in Kenya, and MaxAB in Egypt. And we just thought maybe we could do the same in Morocco,” said Belkhayat.

The idea stuck and, upon returning to the North-African country, the duo started looking into the local informal retail market. With Alj’s experience in helping FMCGs go digital and Belkhayat’s previous experience in logistics and marketplace, it didn’t take long to figure out the basic things needed to start their next venture.

In 2020, the couple co-founded Chari, a B2B e-commerce platform for informal retailers in Morocco. They now intend to expand into more French-speaking African countries.

Chari and its journey to dominance

Chari is currently present in Morocco and Tunisia and has earmarked francophone countries like Senegal, Ivory Coast, Togo, and Mauritania for expansion in the coming years. The startup took part in the Y Combinator’s 2020 Summer batch and raised over $5 million in seed funding last year, despite how difficult it is to raise foreign investment in the region.

Last year the company launched a fintech product to solve a recurring problem merchants faced. Due to the cash-based culture in Morocco, most merchants keep their inventory and sales records with pen and paper; this meant Chari, likewise, was constrained to receiving payments in cash and upon delivery.

It also meant that Chari was exposed to the insecurity of the cash-based model and that its purpose of digitising the value chain was somehow defeated. The solution? Build a digital payment network. And that is what the startup decided to do.

To accomplish this, Chari made 3 acquisitions last year, one of them being Karny.ma, a bookkeeping startup that helps over 40,000 stores manage credit arrangements with customers. This acquisition gave Chari access to data on how grocery stores extend credit to their customers. This data, according to Belkhayat, would direct how Chari would structure its buy-now-pay-later (BNPL) services to them.

On Thursday, the startup announced that it has closed a bridge round led by Saudi-based venture capital fund Khwarizmi Ventures (KV), AirAngels (Airbnb alumni Investors), and Afri Mobility, the venture capital arm of AKWA Group.

Belkhayat said the money will be used to test their BNPL services, and upon successful results, Chari will acquire a local credit company that will enable shop owners to lend money to their end users.

According to Belkhayat, Chari currently transacts about $2.5 million monthly. The company has signed over 15,000 merchants with almost half of the number using the platform daily. (There are about 200,000 grocery stores in Morocco.)

Growing 20% month-on-month, Chari now cumulatively and actively serves over 50,000 users, and its recent raise caps the startup at $100 million.

Based on lessons from his previous startups, Belkhayat carved a different operational strategy for Chari, a strategy that rounds up its liability to almost zero. Unlike other e-commerce businesses that own warehouses and logistic vehicles, Chari rents them and partners with truck owners.

This is how it works: Belkhayat says many vacant warehouses across Morocco can be rented on a per-metre-square basis for cheaper prices—so why buy or build another one? Similarly, he sees no reason to buy delivery vehicles when several truck owners and drivers are looking for gigs.

Private truck owners download the Chari app and receive orders every now and then, according to their location. They go to pick up the order and deliver the goods to the merchants. The app provides drivers with seamless road-mapping so they can deliver the goods on time.

Chari’s only asset is its app that helps merchants place orders and match drivers for delivery. The stored goods, which could become a liability should there be damages, are insured.

As much as Belkhayat believes in incentivising users, he also believes in reversed incentives. This means that, if you can be rewarded for achieving something, the reverse should be the case for not meeting up.

This philosophy was imported from VoutreChaffeur where riders pay according to users’ feedback. A driver pays less finder’s fee when rated 4-5 stars after a trip and pays more if rated below that. At Chari, when a driver delivers successfully and on time, they receive a bonus but would lose money when it’s otherwise.

On the surface, this might sound problematic, but Belkhayat believes that is the best strategy to ensure quality assurance and create a win-win situation for all stakeholders. Everybody’s happiness is based on the drivers’ service delivery. The drivers are incentivised by bonuses and then, reversely, by the thought of losing money. So far the company has recorded 96% on-time delivery.

The e-commerce space can be divided into 3 sectors. The first one is business-to-business (B2B) where Chari operates; the second is business-to-consumer (B2C); and the last one is quick commerce where deliveries are fulfilled between 10–15 minutes.

B2B is a huge market today especially on the grocery side of things. The 200,000 grocery stores in Morocco currently order, on average, about $100,000 worth of goods per day. This puts the total addressable market for grocery products at about $7.3 billion. When you consider that this is excluding tobacco and electronics, it shows that the B2B e-commerce space is huge.

Morocco’s B2C sector already has a strong market leader, Jumia, that was reported to be holding about 95% of the market share. So, “there is no reason why you would move to the B2C space, which Jumia has dominated. However, quick commerce could be an opportunity for us,” said Belkhayat

Quick e-commerce platforms like Glovo, a Spanish swift-delivery startup, are already playing in this sector, and are  partners with Chari. Belkhayat says Chari helps Glovo with supplying its dark stores in Morocco. That means Glovo buys from Chari to deliver to their end client.

With these moves, it’s safe to say Chari is holding down the B2B sector of the Moroccan e-commerce sector and wishes to be an operating system for this sector.

Even though Belkhayat is bullish on expanding in many African countries in the coming months, there are countries he won’t go to.

“Besides the fact that we intend to operate in francophone countries, countries that have heavily funded startups—like Nigeria’s Alerzo and TradeDepot; Kenya’s Sokowatch and MarketForce; and Egypt’s maxAB that acquired a Moroccan competitor Waystocap—aren’t where we intend to play in,” said Belkhayat, jokingly.

This playful comment explains Belkhayat’s business philosophy: why should you move to become just one of them when you can actually be a king in your area? This might sound like cowardice, but it’s actually about picking the battles you can win. On a more ambitious note, expanding into the francophone region is a plan to gain dominance.

“I know these guys won’t go to the francophone region soon because they don’t speak French, and even when they come, they will probably come in 5 years. In the meantime, Chari would have placed entrance barriers, and they would probably try to buy us out instead of competing and this could be a good exit strategy for us,” Belkayat said, again, jokingly.