They say beauty is in the eye of the beholder. But, imagine a device with a beautiful design inspired by the awesome aurora! Imagine beauty so great that it comes from up above in showers of brilliant colour. That is beauty no one can ignore, and the kind that the new TECNO PHANTOM 9 reportedly exhibits.

From leaked images gracing the internet at this time, the new TECNO PHANTOM flaunts swirls of blue, black and red, feature prominently in various shades on the new device, which looks very much like the colourful aurora lights visible in the Northern and Southern hemispheres of our planet the – beautiful lights which inspired the design of the new device.

The new device, which is highly taunted to be the best PHANTOM device yet- even though I think, the standard set by the PHANTOM 8 would be hard to surpass. However, tech pundits and industry sources claim that the PHANTOM 9 will be something extra extra.

The PHANTOM also features an AI Triple Camera, that is useful for macro photography – which involves taking beautiful close up shots of very small items; In-display Fingerprint Scanner – that ensures you can keep doing your thing on the device with little or no interruptions; Dual Flashlight – so that your pictures are ultra-bright with no dark spots; and Google Lens – for easy image recognition.

That is not all- The beautiful PHANTOM 9 was reportedly crafted by a French design team based in Paris- this just further increases the anticipation for the PHANTOM 9. For a device to be crafted the French style, then you just have to own it to understand. Well, when it comes to TECNO Mobile and delivering amazing smartphone aesthetics to its budding fans, they always go the extra mile.

An Aurora inspired French style designed smartphone, an extraordinary triple AI camera and host of other top-of-the-line specification on just one smartphone? Personally, I cannot wait to see the device for myself. 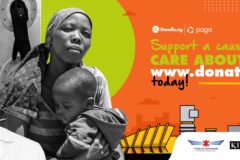 Paga, leading mobile money company, today announced the launch of Donate.ng — a donation platform and subsidiary of Paga created to connect credible charitable causes and organizations to support and donations while elevating their efforts in providing help to the most vulnerable in our midst. Donate.ng is one of the many initiatives Paga has adopted […]