Welcome to the second half of 2021! Do you remember your resolutions from January? What will you do differently in this half?

What love are you on about?

Let’s start from the top. Major french telco, Orange, has announced that it will be rolling out 5G in Africa with Huawei’s equipment.

But over in Europe, the company will be working with Ericsson and Nokia instead.

Yeah, but how does this-

I’m getting to it. So the reason for the difference is quite simple. Thanks to allegations from the U.S. that Huawei’s equipment can be used by the Chinese government for spying, European countries have also become strict with the Chinese company.

And let me guess, Africa has no such concerns?

Stephane Richard, CEO of Orange is quoted as saying ”We’re working more and more with Chinese vendors in Africa, not because we like China, but we have an excellent business relationship with Huawei. They’ve invested in Africa while the European vendors have been hesitating.”

And the love is far from one-sided. Senegal recently moved its government data to a centre built by Huawei. The company has a large market share of the telco equipment industry in Africa and is reportedly working on 25 projects across African countries. 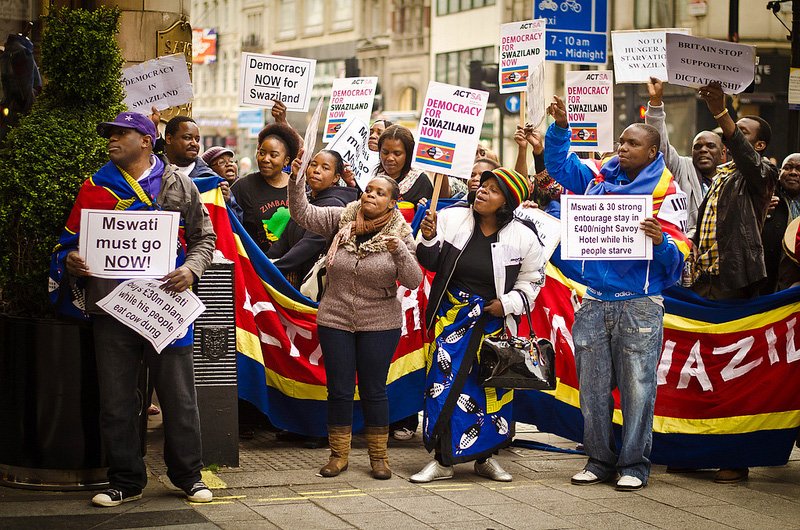 “Whenever we go abroad, people refer to us as Switzerland.”

In 2018, King Mswati III of Swaziland announced that he was renaming the African country “the Kingdom of Eswatini”. Asides from the need to clearly differentiate itself from Switzerland, the change of name was to signify a new dawn.

Three years after the promised new dawn, a protest has broken out causing the government to shut down the internet.

Activists in the country are demanding democratic reforms and the lifting of bans on all opposition parties. They have said they will intensify demonstrations against the government, which have been on for four consecutive days now.

The cause:  Eswatini is Africa’s last absolute monarchy and one of the few remaining in the world. King Mswati III has ruled by decree for more than three decades with unfettered political power over his 1 million people. The royal family has come under fire for their lavish spending while most inhabitants, who are subsistence farmers, live below the poverty line. Crowned in 1986 when he was just 18, the king currently has 15 wives who occupy several state-funded palaces.

Not well. At least seven people have been critically injured and one person reportedly killed from the clash between the police and demonstrators on Tuesday night, according to Amnesty International.

A dusk-till-dawn curfew (6 pm to 5 am) has been imposed as part of efforts to quell the spate of protests, with schools suspended and businesses ordered to close by 3:30 pm. Banks have also closed up until the unrest subsides.

Zoom out: Over the past few years, Africa has been plagued by social media and internet shutdowns in the run-up to elections and in response to protests or dissent. Between January 2020 and February 2021, internet and social media blackouts were imposed in Uganda, Chad, Tanzania, and Ethiopia. Nigeria restricted access to Twitter on June 4, albeit under different circumstances.

Yesterday morning, while Lanre was reading TC Daily at the office, he blurted out that it feels like Facebook wants to do everything. He said this after reading that Facebook was launching ‘Sabee’, an educational app for Nigerians.

Later in the day, I asked him what he thought about Facebook launching Bulletin, a Newsletter Product and he replied, ‘they basically want to own the internet.’

Well, it sure feels that way. Last week, the social media giant announced the launch of Live Audio Rooms(a Clubhouse competitor) and the Podcasts on Facebook feature.

Unlike Substack and Twitter-owned Revue which take 10% and 5% commission on paid subscription revenue respectively, Bulletin won’t take any commission on what writers make from paid subscriptions (for now, at least). This is expected to give Facebook a competitive advantage even though Facebook’s relationship with users over the past few years has been bumpy.

“The goal here across the company is to support people making a living doing creative work. We’re trying to elevate and support those writers and creators who are already producing high-quality work. I think Bulletin can be another great tool to have in their toolbox,” he said during the announcement via Facebook’s Live Audio Rooms.

Though Bulletin is still in beta, anybody can go ahead to subscribe through their Facebook account or email. The platform is currently only open to select writers like bestselling author Malcolm Gladwell who writes the Oh, MG letter and Tan France.

Question: Can Bulletin shake off the popularity of Substack and Revue when it finally goes out of beta?

In addition to Nigeria, the company operates in Kenya, Tanzania and India. It acquired a Nigerian microfinance bank license this year. Branch’s mobile app (available only for Android) now includes a wallet that offers users unlimited money transfers and commission-free bill payments, in addition to instant loans (it is quite instant; I have tried it more than once between April and now) that are collateral-free.

But the Branch feature that catches the eye is the “Invest” tab. Clicking the button, users are invited to “Earn 20% per annum by investing with Branch.”

How is this possible? According to a June 18, 2021 Central Bank of Nigeria fact sheet, Heritage Bank offers 13.88% on fixed deposits, the highest of any Nigerian deposit money bank. But that’s an outlier; Access Bank’s 7.28% is about the average rate.

In this article, Alex who is currently on leavelooks into how Branch is able to make this offer as it carves a niche for itself.