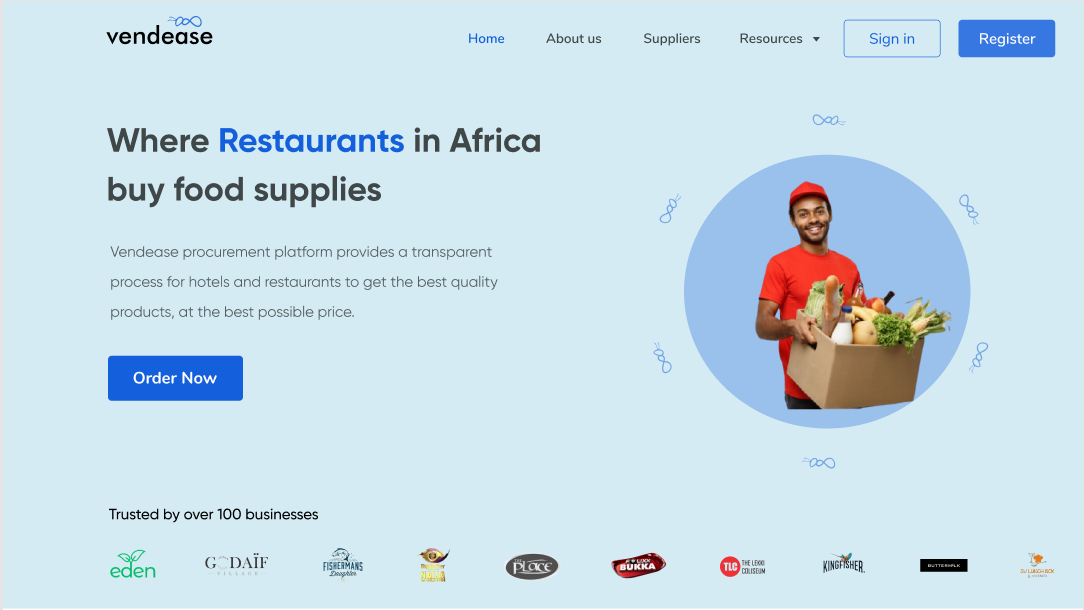 Now, instead of going through the inefficient route of restocking food materials, restaurants can click to order and get all their food supplies within 24 hours on Vendease.

Before Vendease, the co-founders, who have been friends for over six years, had forayed into different businesses together. They had even founded an adtech company that wanted to put ad screens in public buses and ride hailing cabs, but the business didn’t scale.

While growing up, Kara, ex-CEO of RED Media and Fayankin, ex-COO at Statecraft Inc., were actively involved in small-scale trading and procurement. Kara grew up on his civil servant father’s farm where they reared animals and grew crops, but the farm later folded up due to lack of access to the market.

Before leaving for university—and afterwards, occasionally during the holidays—Fayakin handled procurement for his family’s hotel business in Akure. Though Kara would go on to do different things after school and Olumide would become a procurement expert, having these early experiences from different perspectives was key to how they were able to quickly connect the dots when they came together to start Vendease.

Kara, who considers himself a foodie—somebody who loves to eat—had a light bulb moment when a food truck that sold “one of the best pork chops in the world” in the Lekki area of Lagos shut down due to its inability to cope with the price instability of food materials in Nigeria. The business was running at a loss and the owner told Kara he had to shut down.

Kara told his friends about the closure of his best pork chops spot. They all vented and, as usual, discussed the problem for a while, asking what if they could do something to help small food businesses like this to scale. But they soon forgot about it and went on with their lives.

The eureka moment that would lead to Vendease came when Fayankin and his wife won an online couple’s competition that sent them on an all-expense-paid getaway in one of the finest hotels in Lagos. While in the hotel, Fayakin overheard the manager of the hotel lamenting about the late delivery of items he had ordered for about two days. He engaged the manager and carefully registered all his troubles. He then asked the manager if he’d take an alternative if he saw one. The manager said yes and that’s how Vendease, which hadn’t been named, got its first customer.

“We stopped after the third successful errand. While running errands for this hotel, on the side, we were talking to other food business owners and learning a lot from the open market, and then we decided to build technology stacks that would help solve the problem at scale,” Kara told TechCabal.

They reached out to Gatumi who was then CPO at 54gene, Africa’s premier biotech company, and Oyepeju who was a serial techpreneur and has built technologies for a few global tech companies like IBM and MTN.

“We put a thesis together after a couple of months and analysed what the market size was, and what our market share would be if we were to kick off then. We took our thesis to local angels in the Lagos ecosystem and they gave us our first cheque to prove the business model based on our track records,” Kara said.

Pivoting into a more sustainable system

The initial idea was simple: enable food businesses to get their regular supply at the quality and price they wanted. So they built a marketplace to connect restaurants with manufacturers, vendors and farms. This way, restaurants could compare prices and buy according to their budget.

They entered the market with this product and, after a while, realised that they’d only digitised the traditional way of procurement. Their customers’ complaints on delayed fulfilment and poor quality still lurked around. So they started building proprietary tech and systems that would allow them to be active in the entire value chain, from the point of order to the point of last-mile fulfilment.

So how does a food supply operating system work?

Vendease doesn’t just allow food businesses place orders for food supplies and track them; they can also manage inventory, track expenses and gain access to credit facilities. The startup is moving towards becoming the only partner food businesses need to scale and stay in business.

According to Kara, the company has grown from a procurement marketplace to a full-fledged data company. In the space of 22 months of operations, the company has built a data bank that now gives near-perfect insights on how to serve their customers better.

“We now have an algorithm that can predict when and what our users are going to order. So we have our trained procurement officers on standby before our customers even make their orders. We can move ahead, and this is how we’ve been able to beat the 24 hours delivery time,” Kara said when asked how the company fulfils a promise of 24 hours delivery in a busy environment like Lagos.

The startup is growing fast from a one-customer business to handling procurement for over a thousand food businesses in three Nigeria cities: Lagos, Ibadan and Abuja.

Because its algorithm was built on a tough market like Lagos, expanding and operating in Ibadan and Abuja was seamless.

In September 2021 alone, the startup said it has delivered approximately 100,000 metric tons of food and helped restaurants save approximately 5,000 man-hours in the last 9 months. This has helped the startup to hit a $12.9 million transaction volume in September.

The startup joined Y Combinator in the summer of 2020 and on Monday, October 25 this year, it announced that it has closed a $3.2 million investment round from Global Founders Capital, Y Combinator, Hustle Fund, Liquid 2 Ventures, Hack VC, Soma Capital. Early backers like Tayo Oviosu of Paga, John Obaro of Remita and Magic fund also participated.

Speaking on their investment in Vendease, Don Stalter, managing partner at Global Founders Capital, said, “As a backer of one of Africa’s very first unicorns, Jumia, we’ve seen a great deal of talent in the market—and Tunde and the Vendease team are best in class both in EMEA and globally. Their laser focus and rapid growth are unprecedented, and there’s a massive opportunity ahead.”

The company plans to use the fund to expand into more African cities and build more technology stacks that will position it as the operating system of food supply.