TechCabal Daily – Taking the Edge off with Microsoft

South Africa has enacted its Cybercrimes Act and some of the offences criminalised can land you in jail for 10 to 15 years.

Theft of intellectual property? Right to jail, right away.

The Act also criminalises “malicious communications” which includes messages that incite violence or damage to property and lives, threaten violence, or disclose intimate images. If you do that, you go…

Chatbots are increasingly becoming a popular method for organisations to interact with their consumers. Globally, over 1.4 billion people use chatbots on a regular basis and over 34% of users prefer chatbots because they can get the answers they want almost immediately.

Companies are chatting about it too because chatbots can cut operational costs by 30% and save hours when they automate customer service.

Hold up, what are ChatBots?

Chatbots are artificial intelligence (AI) systems that enable customer engagement via SMS, speech, or chat applications such as Facebook Messenger and WhatsApp. They’re the automated response systems you get when you send some business profiles messages on these apps.

While chatbots are not widely used by companies in Africa currently, a number of startups on the continent are looking to deepen this use case of AI. One such is ChatBots Africa, a Ghana-based startup that helps small businesses automate customer interactions and sales channels using social chatbots.

Founded by CEO Ronald Tagoe and launched in January this year, ChatBots provides organisations with AI-powered conversational bots to interact with their customers via WhatsApp.

With WhatsApp being the most popular instant messaging app in Africa, boasting billions of users, ChatBots Africa’s solution allows companies to personally engage at scale with people on a platform where they’re already spending a lot of time.

AI is expected to add more than $15 trillion to the total global economy by 2030. Much of this value will be realised in advanced economies like the US and UK, with only a few countries currently adopting the technology in Africa.

The lack of skills required to design, develop, and maintain AI-enabled systems is a major barrier to their adoption on the continent.

But Tagoe notes that this isn’t a problem with ChatBots Africa’s platform, which he explains is built for all ranges of experiences, from the complete newbie to the advanced user.

TAKING THE EDGE OFF WITH MICROSOFT 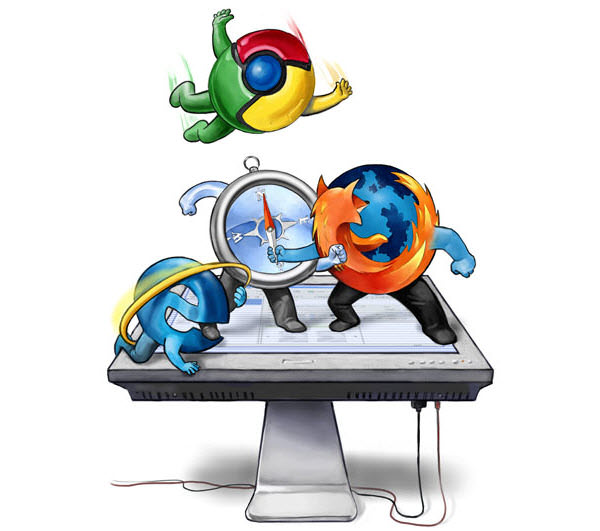 Microsoft is taking an edgy approach to things.

Over the past few days, it’s been discouraging millions of Microsoft device owners from using Google Chrome. This is all in a bid to get more Microsoft users to use the company’s in-built browser, Microsoft Edge.

Presently, Google Chrome holds the market share with 64.06% of users while Edge holds a minor 4.09%. Apple’s Safari is the second largest with 19% while Mozilla Firefox has 3.91%

It wasn’t always so, however; there was a time when Microsoft’s browser held 90% of the market.

The biggest contributor to low use of Microsoft’s Edge stems from family problems, i.e., trust issues users had with Edge’s predecessor, the ill-fated Internet Explorer.

When Microsoft launched Internet Explorer with Windows ’95, its biggest competitor was Netscape Navigator, which had 80% of the market at the time.

By 1998, Microsoft had 90% of the browser market share, pushing Netscape’s Navigator into a spiral that would end with its shutdown later in 2007. With Microsoft’s glory, however, came an antitrust lawsuit from the US government, which claimed Microsoft had monopolistic practices which were unfair to its competitors. Microsoft lost the case but eventually won the appeal. But its victory was short-lived.

The price for winning the appeal was sharing its interface with other companies and that move eventually helped other companies give Microsoft a taste of its own medicine.

Fake it till you make it, is what Microsoft probably thought with its Internet Explorer.

If there’s one thing generally agreed on about the Microsoft v. Netscape browser war, it’s that Netscape had the better browser. It had workable plugins, and data sync features, all of which Internet Explorer did not. If you’re old enough to remember, Internet Explorer—like the fax machine, ew—was the perfect test of patience. It was slow and buggy, and adding a plugin could mean a shutdown (cc: iexplore.exe has stopped responding). To upgrade Internet Explorer, users also had to upgrade the Windows OS because of how embedded IE was into the system, and oftentimes, this meant buying a new computer.

With Netscape’s fall, many other competitors saw the chance to enter the market, taking advantage of Microsoft’s defence to its earlier lawsuit with the US government—its monopoly was non-coercive.

Mozilla launched Firefox in 2002, Apple launched Safari a year later, and both had more features than Internet Explorer including data sync which most developers needed. By the time Google entered the market with Chrome in 2008, the stage had been set.

New and old users ported to Chrome, Firefox or Safari because they were easier to use. By the time Microsoft revamped and built Edge in 2015, it was a bit late.

Zoom out: Microsoft is still fighting to increase its market share, though. Other than alerting users to Google Chrome’s issues—which may land it in another antitrust case—it also frequently reminds users to set Edge as the default browser.

TC INSIGHTS: WHAT SHOULD AFRICA PRIORITISE?

Africa’s digital skeleton is gradually adding flesh to bone. Countries like Rwanda and Ghana are doing more to achieve digital transformation across basic yet tedious processes with the former launching a one-stop platform for accessing public services in 2015 and the latter digitising national identification.

But there’s still more to be done to drive development, job creation, and economic growth. There are also different areas that African countries who are trying to achieve these could focus on. 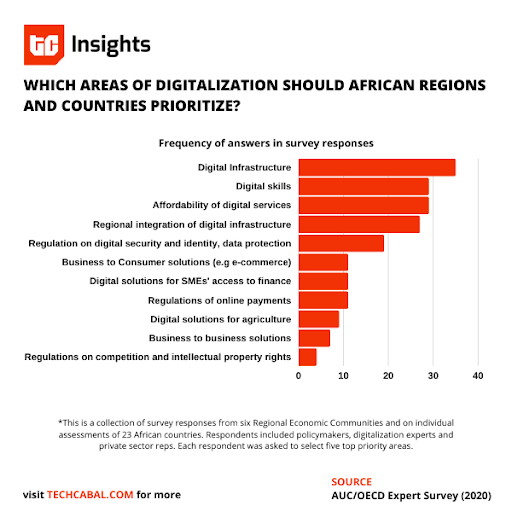 An expert survey by the OECD in 2020 showed that policymakers and other stakeholders believe that when it comes to creating more jobs, providing digital infrastructure should receive greater priority over digital skills, digital solutions for agriculture, and anything else.

Digital infrastructure is a core need and the foundation for a lot of these other areas to function. However, focusing solely on building infrastructure over other components of digitalisation could have more delayed, long-term effects on economic growth compared to others like improving access to finance.

Take South Africa, for instance. Ninety-eight-point-five percent of businesses are SMEs, and they contribute 39% to the country’s GDP. Yet, South Africa has a $30 billion SME financing gap, and analysts predict that about 60% of businesses could shut down due to the spending contractions imposed by the pandemic.

In some economies, it is clear what they should focus on. Ethiopia’s economy, for instance, is largely dependent on agriculture (40% of GDP and 75% of the workforce). So, perhaps, Ethiopia should focus on providing adequate digital solutions for smallholder farmers.

On the other hand, countries like Sudan or Cameroon with no specific data protection laws in place should consider drafting and implementing legislation for that first, because with further digitalisation comes the risk of data leakage.

Every country should recognise where they fall short and first direct their efforts at those areas, instead of applying a one-size-fits-all approach.

Seamfix believes identity should be a right, and not a privilege for all Africans, and with 240k+ identities verified, Seamfix is living up to her mission of solving one of Africa’s biggest challenges through identity verification. 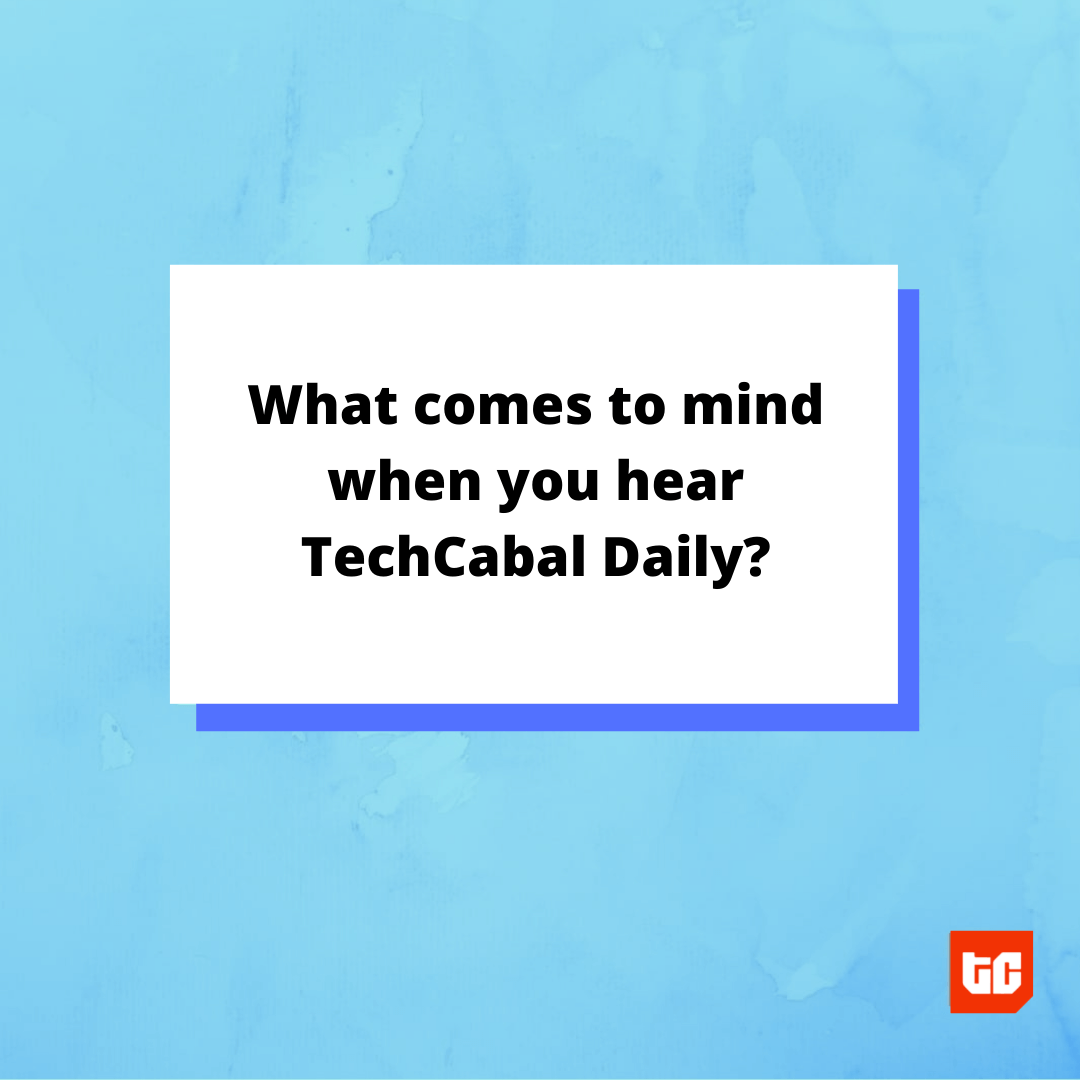 Are you more interested in reading about fundraising, or reading about digital nomads? Do you prefer to spend your mornings reading about the newest startups, or listening to Twitter Spaces on how to build better products? Frankly, we don’t know—we can’t read minds yet.

That’s why we’ve created a quick survey to learn more about you and create better content that matches your interests. Think of it as an investment.

By completing this survey, you get better content, and also stand a chance to win in our upcoming giveaway. 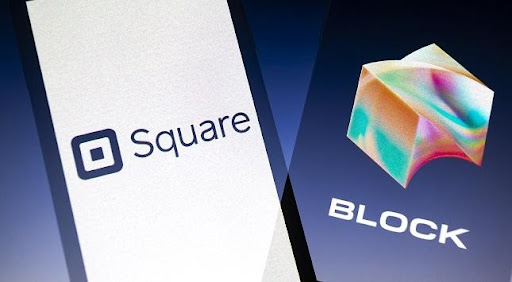