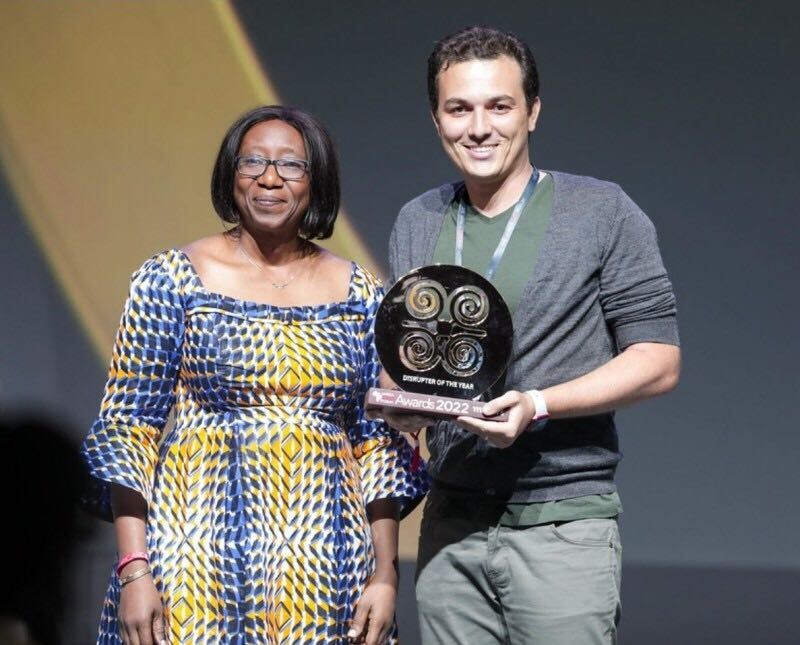 Ismail Belkhayat, co-founder and CEO of Moroccan B2B e-commerce platform Chari, receives an award for the disruptor of the year at the 2022 Africa CEO Forum, Abidjan.

Abidjan, the largest city in Côte d’Ivoire, and its commercial centre, came to life last week when it hosted the Africa CEO Forum, an event that has carved a name for itself as the largest yearly gathering of Africa’s foremost private-sector leaders.

The 2-day event officially started on Monday June 13 and ended on Tuesday. Sofitel Hotel, a 607-room edifice overlooking the Ébrié Lagoon, was the venue for the event. There was a central hall called Africa Hall where the keynote speeches and key panels were hosted. There were also 6 smaller rooms named after some African capital cities, and different strategic rooms for closing deals that could only be accessed by invitation. The magnificent hotel was indeed filled to the brim. According to the organisers, there were 1,800 attendees including business executives, journalists, and adhoc staffers.

The event opened with a keynote speech from the Ivorian president,  followed by a 15-minute conversation between CNN’s Eleni Giokos and Chairman of BUA Group, Abdul Samad Rabiu, who was one of the sponsors of the event. And then the day spiraled into a couple of more speeches happening simultaneously.

The event had quite a lot of concurring and differing talking points among participants. While some discussants called on stakeholders in Africa to strengthen collaboration with the rest of the world in order to achieve economic sovereignty for the continent, others urged Africa to look inwards and boost its intra-Africa trade as it currently has the lowest rate of intra-continental trading in the world.

Another interesting thing about this year’s Africa CEO Forum is that, for the first time since it was founded in 2012, it integrated Africa’s burgeoning startup ecosystem into its programme. This segment was tagged the Disruptors Club and it had 20 startups including Tunisian Instadeep, Ghanian Farmerline, Algerian Yassir, Nigerian Releaf, and Moroccan Chari.

To be honest, it was a curious crowd as you could literally single out the startup founders in their T-shirts and sneakers from the pool of legacy business leaders in suits. Their appearance demonstrated that they were indeed disruptors, hinting at how business culture could possibly shift to casual everything in the nearest future.

“I had to change,” Ikenna Nzewi, cofounder and CEO of Nigerian agritech, Releaf, said to me, jokingly, after lunch on Monday. He was in a suit. He’d been wearing a knitted polo shirt and jeans. Now he has blended with the crowd. The suit was probably his look when he still consulted at Bain & Company.

Members of the Disruptors Club were included in both high- and small-level panels, and were platformed to make a case for the economic importance of what their companies do for the business ecosystem at large.

Beguir believes that AI is more disruptive than anything else at the moment, even more so than the internet. “Artificial intelligence will drive decision making and will soon determine the next most powerful government and economy,” Beguir said confidently, with a faint smile, during the first panel of the forum. This panel included the likes of Ghana’s president, Nana Akufo-Addo; Nigeria’s vice president, Yemi Osinbajo; International Finance Corporation managing director, Makhtar Diop; Telcar Cocoa president, Kate Kanyi-Tometi Fotso; and the governor of the Central Bank of Kenya, Patrick Ngugi Njoroge.

Moulaye Tabouré, co-founder and CEO of Anka formerly known as Afrikea, an Ivorian e-commerce solutions provider startup, also made a case for the position Africa must take in the $13 trillion global e-commerce market, forecasted to reach $55.6 trillion by 2027. Tabouré believes that innovations such as Anka would help Africa claim its place in global commerce and help Africans sell to the rest of the world as opposed to just buying from them.

The world’s population has increased by a third in just 2 decades. Currently at 8 billion, it is projected to hit 9.5 billion by 2050. According to the United Nations, Africa will contribute 1.3 billion of the 2 billion increase in the global population between 2019 and 2050. With this level of population growth, there lies a full-blown challenge and opportunity.

Noureddine Tayebi, founder and CEO of Yassir, an Algerian super app and part of the Disruptor Club, believes that we must prepare for the population uptick across all sectors, including education, energy, food production, finance, and transportation—areas where his startup has been building and solving problems for the past 7 years.

After onboarding and serving as a ride-hailing and delivery partner of over 3 million people, Yassir is now helping to create a cashless economy, starting with the Maghreb region, by gradually onboarding its users into digital banking by providing them with wallets.

Besides transportation and finance, there’s also the problem of healthcare and food processing. Who’s going to provide healthcare for the projected 1.3 billion people and what’s going to feed them?

On the healthtech side, Zineb Drissi Kaitouni has an answer for that and it’s DabaDoc, a healthtech startup she founded out of Morocco in 2014 to connect healthcare providers to those who need their services. It currently operates in Morocco, Tunisia, and Algeria,  and announced this month the launch of its Ivorian operations.

Sub-saharan Africa has 1 doctor per 1,000 people. It’s even worse in some counties, Nigeria for instance has 4 doctors to 10,000 people. Drissi Kaitouni believes that Africa can improve friction and accelerate healthcare distribution by digitising the process, which her startup has done through telemedicine and video consultations.

There are 4 major obstacles that limit the success of small-scale farming in Africa: climate, technology and education, financing, and policy and infrastructure. While climate can’t be influenced, the remaining 3 can be controlled, and as a result, be used to hedge against the climate challenge.

Farmerline, a Ghanaian agritech platform, combines digital tools, logistics, field agents, farm resources and agribusiness partnerships to support African farmers with access to high-quality fertiliser and seeds; free education on climate-smart farming practices; and connections to international markets. The company’s in-house technology platform Mergdata is also licensed by global food traders and manufacturers who use its customisable tools to improve the lives of farmers around the world.

“Our overarching goal is to help farmers make more money while providing more agricultural value on the continent,” said Alloysius Attah, the founder and CEO of the startup that raised 12.7 million in funding in April this year.

Last year African startups raised north of $5 billion in investment. By the end of the first quarter this year, over $1.5 billion was raised from just 6 deals.

The 30 members of the Disruptor Club have raised $1 billion collectively. This is an indication that the African startup ecosystem is gradually becoming a strong force in the African economy and has to be brought to the big tables where the big legacy guys dine.