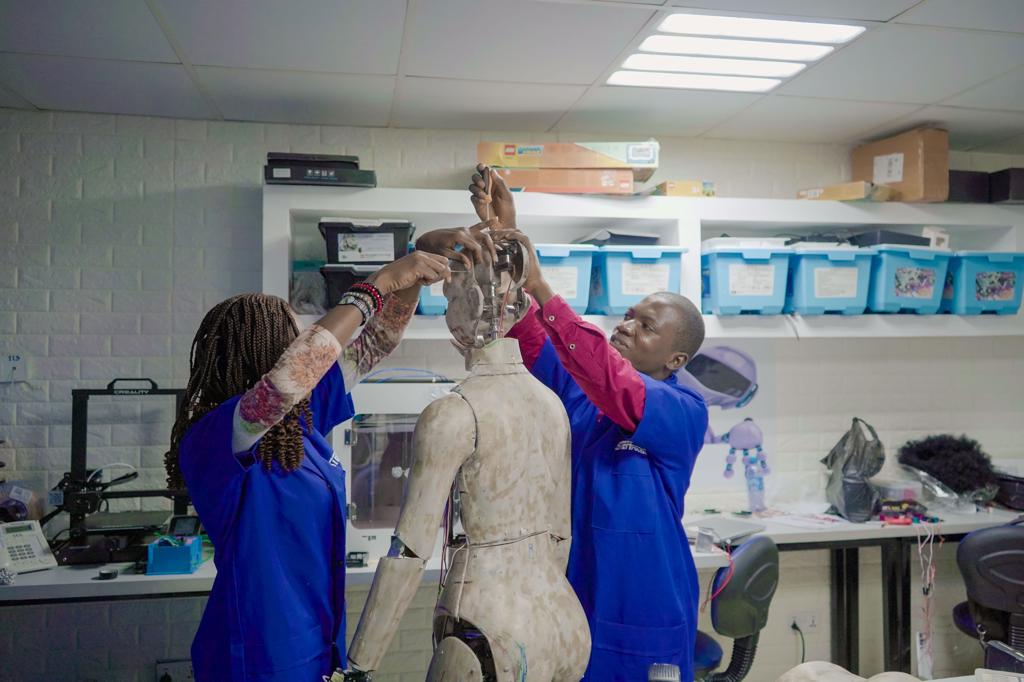 Somewhere in Mabushi, a crossroad area between the inner and outer districts of Abuja, Nigeria, Uniccon Group, a two-year-old Nigerian technology firm, has built a humanoid: a 6-foot-tall multilingual human-like robot called Omeife. From an idea that was conceptualised in 2020 to a back-and-forth construction—slow wins and quick-succession learning—that stretched across two years, Omeife, built as a female Igbo character that understands and speaks eight different languages, is now a product ready to meet the world.

Powered by sophisticated artificial intelligence algorithms developed in-house by the company’s team of scientists, Omeife has a deep understanding of African culture and behavioural patterns. Speaking to TechCabal about the project over a call, Chuks Ekwueme, who founded the company in 2020 and serves as its CEO, revealed that the humanoid also has a real time understanding of its environment including active listening and the ability to focus on a specific conversation thread as it’s happening. “It’s not just multilingual, it has the ability to switch languages and interact with specific gestures—hand illustrations, smile and other bodily gestures—that match the tone of the conversation,” said Ekwueme. Omeife currently speaks English, French, Arabic, Kiswahili, Pidgin, Wazobia, Afrikaans, and of course, Igbo.

“No, I don’t think we want it to do that,” Ekwueme said when asked if Omeife has the ability to frown or show expressions of sadness.

But what really underscores the Africanness built into Omeife is its ability to speak each language with a native accent, pitch and vocabulary, with detailed pronunciations of words, sentences and even phrases. African politeness values are also entrenched into its social interaction functions. Ekwueme said Omeife pays attention to a specific person to keep the conversation alive, and chooses its words carefully—sieves out words, phrases, sentences and expressions that are not polite in African cultures. “This particular attribute makes it safe to interact with kids,” Ekwueme added. He also added that Omeife has a learning pipeline that helps it to improve and understand new things from conversations. It can also recall and understand old concepts better with new information.

Omeife also has terrain intelligence in that it knows its own ground level and stability on the floor, which helps it navigate on non-flat surfaces and maintain good balance. It also has a position awareness feature and a grip sensor that allows it to size, understand shape, and how to hold things with its hands.

Human-like robots are becoming more common for robot manufacturing companies. The primary idea behind this is to create machines that can perform tasks as efficiently as humans. But studies and recent events reveal that even after years of advancing, the rate of progress is too slow. For example, the underwhelming performance of Elon Musk’s humanoid, Optimus, during Tesla AI Day in September attested to this slow progress. Despite Elon Musk’s enthusiastic comment about robots taking over physically boring tasks from humans, top roboticists have predicted that the world is still a long way off building a robot that can outright replace human labor. And Optimus—walking gingerly on stage and later getting carried off by a group of people—proved the roboticists’ assessment.

By now, there should have been more progress in self-healing materials, muscle-like actuators, human-like perception, computation, and research. “We still have fundamental robotics technology gaps that need to be solved before we will see ‘human level’ anything,” Will Jackson, CEO of robotics company Engineered Arts, told The Verge in an interview.

Ekwueme believes that his company has built a robot that is doing what it was designed to do. “We never planned to replicate humans but to build a robot that can support humans with some level of precision, and we have done that,” he said. Most of the materials used for Omeife’s hardware components are locally sourced. “We also built our cloud infrastructure needed for the humanoid to store terabytes of behavioural data from scratch. Infrastructure we are now commercialising and offering to private and government entities,” He added.

While Uniccon Group has tagged Omeife the first African humanoid on the basis of being the first African by design and purpose, and the first to announce its completion, Africa has other humanoid development efforts. For instance, Abdul Malik Tejan-Sie, a Sierra Leonean engineer based in South Africa is also building a robot, which has been tagged South African first humanoid. There was also an early effort from Richard Holdbrook, a Ghanaian who designed a prototype in 2018.

A close look into Omeife, while it might be somewhat satisfactory internally, it still looks like an unfinished product outside. Aesthetically, it’s not that easy on the eyes. Compared to robots from companies like Xiomi and Honda, the prosthetic skin needs more work to blend well on the humanoid’s body. But here’s the good thing about robotics: Building robots is a huge undertaking so much that every little progress is celebrated. Tesla’s Optimus after two years could only wave and do a stifling dance move, yet the company was proud enough to unveil it. Ekwueme said the company will keep modeling this first version of Omeife—more languages, aesthetic improvement, more advance mobility and vision—to come up with Omeife 2.0. Upgrades are good, however, for a self-funded two-year-old Nigerian startup, Uniccon Group has done narrative-shifting work.

Omeife was supposed to be unveiled during the GITEX 2022 event in Dubai but it wasn’t cleared at the border, along with the military grade drone the company has also developed. Ekwueme said the reason behind wanting to unveil in Dubai was because of the global exposure it would drive to Nigeria and Africa. “Tech like Omeife is not too mainstream, especially in Africa, so we want to show the world and then start a new narrative for African tech,” Ekwueme told TechCabal. “We also wanted to engage global AI and robotic partners as we are planning to mass-produce our products.”

Uniccon Group is keeping the hope of improving the humanoid to the point of mass-producing and selling it for starting from $30,000 upward, Ekwueme said. This is similar to Tesla’s plan for its humanoid. Musk said the humanoid, upon completion, will sell for $20,000. Optimus is built for physicality while Omeife is built for intellectual social engagement. “We can also build for physicality, all we need to do is to modify the AI and strengthen the hardware component of our humanoid,” Ekwueme said confidently.

Mass producing and selling for such a price—more than Tesla’s humanoid’s floor price—might be a long shot, considering that there aren’t many robot mass-producing companies in the world at the moment. It might also take some time for the world to accept the commercialisation of a made-in-African robot, compare to those from other regions that have been in the game for decades. Building a robot is the beginning of the journey for Ekwueme and his team, driving global acceptance and adoption to it is likely going to be more tasking. But sheer will is important while building in uncharted territory. It’s working for Musk, and it just might work for Ekwueme too. Also at this pivotal point where African technology space is gaining lots of attention and investment interest, the need to diversify and build exportable deeptech solutions shouldn’t be overlooked and discouraged. And as initially argued here, Africa is somewhat ripe to start solving global problems: projects like Omeife and similar ones currently under development are testament to this thesis.