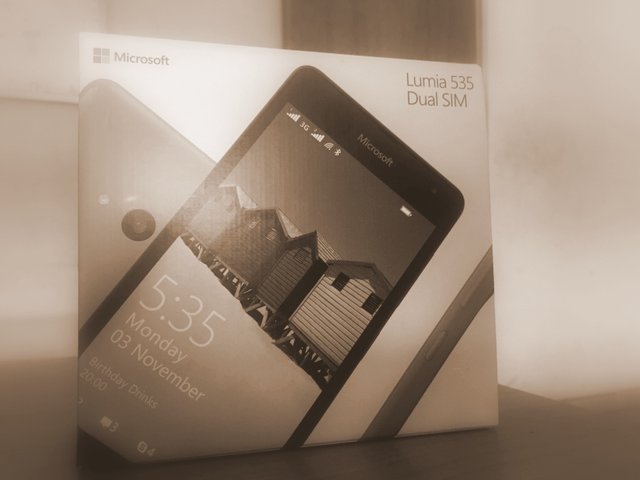 Microsoft has finally released the Microsoft Lumia 535 Dual Sim smartphone, the first Windows Phone handset to not feature the Nokia branding and we just received a review unit.

The Lumia 535 is not in stores yet, but it will be shortly, so here’s a first look at what promises to be a capable device for the price — we’ll see if that is really the case in the full review. Right now, we’re just going to unpack ours.

The Lumia 535 comes with a charger, one pair of ear buds and a large 1905 mAh battery. On the inside, the phone packs 8GB internal memory which you can expand to 128GB via memory stick, and a 1.3Ghz quad core processor. Despite not sporting the ‘Nokia’ branding, the Lumia 535 doesn’t appear to be any different from other Nokia Lumia budget phones. In fact, it’s as ‘Nokia’ as the Lumia 530 and its predecessors. The only difference is the ‘Microsoft’ logo at the front and back. The Lumia 535 has rounded corners and a changeable, coloured plastic back cover that wraps around the phone. It comes with a 5-inch Gorilla Glass 3 display with 540×960 resolution. It’s also got a 5 megapixel front-facing camera… … and a matching 5 megapixel rear camera, equipped with autofocus and LED flash. The volume and power/screenlock buttons are on one side… …the other side is bare. There is a conveniently placed earphone jack on the top… …and a charging/USB port at the bottom. We’re not quite sure about how much it’ll cost when it hits the shelves, but it is likely going to clock in at just around N30,000/$160. Stay tuned for our impressions through a full review tomorrow.

Update: Official word from Lumia Marketing in Nigeria puts the actual retail figure to be from 25,000 Naira. Also Lumia 535 Dual SIM is available in Nigeria at all Retail and Online partners.