Microsoft Inc. has unveiled the Lumia 540 Dual SIM. “Designed for young and ambitious people looking for their first serious smartphone,” Microsoft said in a statement to TechCabal. “With the Lumia 540 Dual SIM, we’ve made it possible to deliver a smartphone with strong design and technology credentials that is also fun to use, and incredible value for money”, said Jo Harlow Corporate Vice President for Phones at Microsoft.

The device also ships with Microsoft services such as Skype and Office (available out-of-the-box) and is capable of being upgraded to Windows 10 (later in the year when that option becomes available).

Lumia 540 dual SIM is scheduled to roll out by early May 2015 in Asia Pacific, Italy, India including the Middle East and Africa; it will be available in cyan, orange, white and black variants. 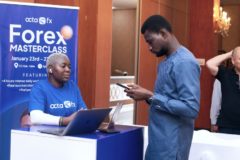