The Troubling Afterlife Of Electrical And Electronic Equipment 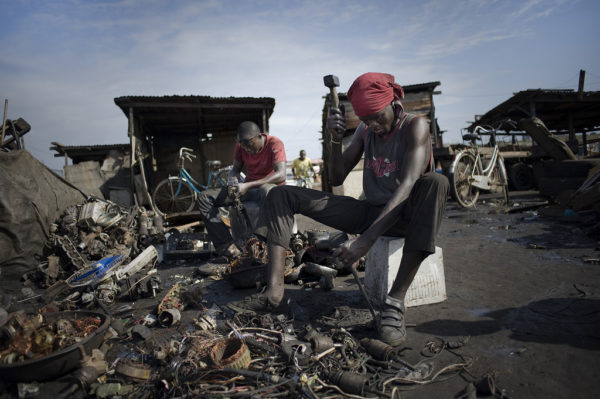 As far as I can recall, I’ve owned seven phones in the last nine years, four of which forcefully ended up with people who needed them more than I did. Out of the remaining three, I recall handing one down to a younger sibling and disposing another in a waste bag during spring cleaning. I haven’t given much thought to where my current phone will end up when it no longer serves its purpose. Until now.

According to a report from Terragon Group, citing 2018 reports from We Are Social and the National Communications Commission, Nigeria has 105 million unique mobile device users. Mobile here refers to phones, tablets, personal computers amongst others, with 81% accounting for the mobile phone category. A mobile phone, on average, lives for about two years. If it has been used extremely carefully, it can be handed down to another user for another six months to one year. So every three years, at the very least, a million mobile phones die and are laid to rest in waste bins, bagged and discarded in dumpsites across the country. Sometimes, they make their way into the hands of an animated technician at Computer Village or into the cart of an informal recycler out and about. This is asides home appliances like television sets, refrigerators, air conditioners, washing machines and every other electrical or electronic equipment which has reached its end of life and will most likely not receive an ethical burial or transition into the afterlife.

“We live in a poisonous reality,” says Ifeanyi Ochonoghor, CEO of E-Terra Technologies, an e-waste management company based in Lagos.

When a device reaches its end of life, it most likely is disposed in a bin and ends up in a landfill or dumpsite where humidity and rainfall wash its poisonous components into the soil and water bodies. Exposure to poisons like lead and mercury (in food and drinking water) are contributing to the increase in cancer cases in the country amongst other health implications. The Global Cancer Observatory (GLOBOCAN) puts this figure at more than 100,000 annual new cases in Nigeria. Electronic waste inducing soil loss in places like Malawi, according to a study by the Food and Agriculture Organization, will potentially cost the country $40 million of its GDP annually because of reduced agricultural yield.

When landfills and dumpsites are incinerated, air is contaminated by poisonous greenhouse gases which affect the ozone-layer and hence bring about adverse climatic conditions like we are experiencing here and in other parts of the world.

“What’s coming for us as a country and globally, is unprecedented. When we think of climate change, we think of the glaciers but its coming to our doors,” warns Ola Osoka, a member of Green Compass Recycling, a company which aims to introduce the principles of a circular economy to the country.

Weather and climatic trends this year from increased floods across the globe to fiery temperatures, point to the dangers she warns of. More than eleven states across the country were affected by severe floods this year. In places like Benue, entire communities were submerged in water; houses and livelihoods lost, lives gone. Recall how Lagos fared in 2017?

Despite the severity of the effects posed by our current handling of e-waste, not very many people are aware of how simple decisions about where to throw out an old toaster or mobile phone is summing up to create this monstrous problem. Interestingly, since 2011, the National Environmental Standards and Regulations Enforcement Agency (NESREA) ratified a law that enforces responsibility for the collection and ethical disposal of electronic waste on their producers, an overarching term that includes not only electronic product manufacturers but also importers and distributors. Producers can also outsource that obligation to a Producers’ Responsibility Organisation (PRO) which has been registered under the E-waste Producers Responsibility Organization of Nigeria (EPRON).

But it’s one thing to make laws and another to make sure that not only are they adhered to, but that offenders are appropriately punished or sanctioned.

The presence of a thriving informal sector headquartered at electronics markets across the state, or navigating Lagos with metal carts collecting and improperly disposing or recycling e-waste is a huge problem. And despite the existence of agreements like the Basel Convention or the Bamako Convention, e-waste is still imported into the country in alarming numbers. Both conventions are signed agreements between world governments to stop the importation of electronic waste into Africa from developed countries.

Electronic waste is ideally disposed through an official take-back system where manufacturers receive dead electronic equipment at designated collection outlets, dispose ethically or recycle. Apple, for instance, has an Apple GiveBack program operational in parts of Europe and the US. Customers can walk into an Apple Store or contact them online, trade their devices for purchasing credits or simply have it recycled if they are ineligible for credits.

Nigeria is heavily import-reliant hence a bulk of electronic equipment in the country are not manufactured locally. There are therefore, very little take-back initiatives going on. Hewlett Packard (HP) just began, this year, a take-back service in conjunction with its service center partners, Hinckley Group.

Not only do we urgently need to begin to sensitize Nigerians on the proper disposal of e-waste, environmental and immigration government agencies needs to do more in ensuring strict adherence to already existing laws regarding both management and movement of e-waste in the country.

Electronic brands with presence in the country should be mandated to ensure their official distributors, at the very least, are engaged in take-back programs that encourage consumers to rethink the way they dispose dead electronic equipment and provide channels that enable them form new habits around disposal.

E-Terra Technologies, which launched operations in 2016, is intervening in the ethical collection and management of e-waste. While originally starting out using a B2B model providing their services to only corporates, they now employ a B2C model collecting, recycling and disposing ethically, electronic waste of any kind. When contacted, they begin with an assessment of the equipment to be disposed. They assess the conditions, if they can be reused, how much they are worth , if they contain any data and so on. If the equipment contain data and/or any data storage device, they compulsorily carry out data destruction off-site. Equipment are then decontaminated and deconstructed to extract valuable secondary raw material like gold (which they export) and lastly. To ensure that the loop of recycling closes, E-Terra ensures that every recyclable component of e-waste are handed over to responsible off-takers who have the systems and machinery to recycle them.

With ISO 9001, 14001 and 45001 certifications, E-Terra is fully handling electronic waste “in line with international standards and best practices,” says Ochonoghor.

While there are only a handful of companies offering e-waste management services in the country, E-Terra and Hinckley are two of three e-waste initiatives operating on a large scale in the country. Across Africa, companies like eWaste Africa and Tshwane Electronic Waste Company both in South Africa, and Phenix in Tanzania, are creating systems that help collect and manage e-waste responsibly.

Nevertheless, there’s a lot more work that needs to be done.

I had pitched a story on e-waste management to my editor sometime last week. Until now, I hadn’t given much thought to how gadgets I owned were disposed but diving into the subject and speaking with industry experts over the course of the week has opened my eyes to how deeply problematic the situation is, especially in Nigeria, and the collective danger we all are exposed to.

I am currently exploring how to dispose my current mobile phone properly when it no longer serves its purpose.