How ForLoop Africa Became the Continent’s Largest Community for Developers 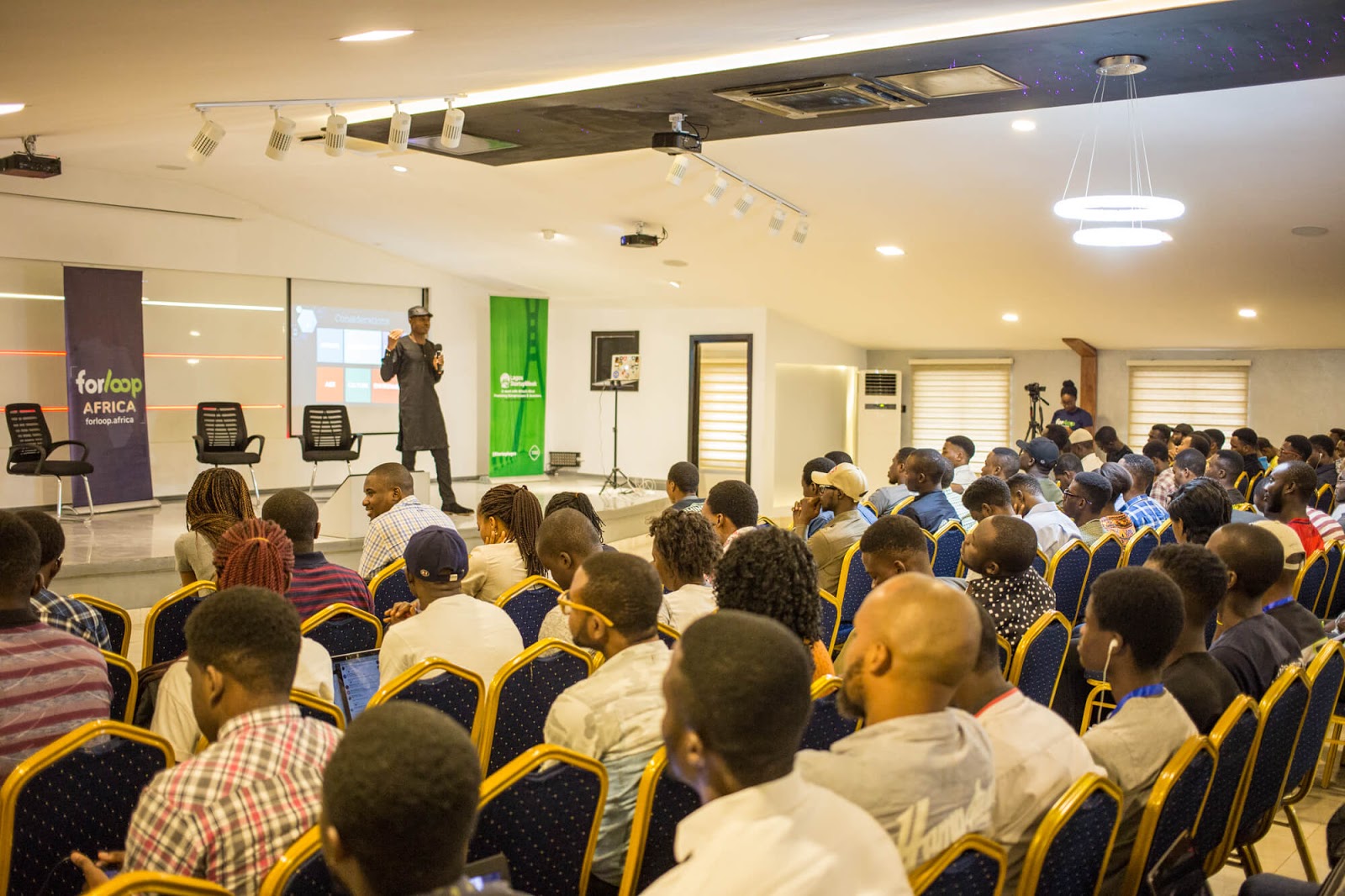 It’s 2015 and Ridwan Olalere is the Engineering Manager at Hotels.ng and finding local developers has been quite a task. Developer communities are still a relatively new concept and foreign-based communities like GitHub are not yet popular. Akinola Falomo’s DevCenter, launched in 2014, is still in its infancy with a community website that has attracted few developers. Olalere met with several developers to discuss starting a community that was more wide-reaching including Falomo, Prosper Otemuyiwa and Brice Nkengsa.

Olalere then reached out to a friend who was a technical consultant at the government-built Idea Hub, who offered him free space to host a  developer meetup, the first for what would eventually become ForLoop. The goal was to build an inclusive, engaging and vibrant community of developers across Africa, starting with Nigeria. “I put the event on attending.io and reached out to as many people as I could, but to get even 30, I had to make a lot of calls urging people to come through,” Olalere remembers. “Thankfully the event went well and the attendees were impressed.”

Fast forward to 2016, Olalere has held a couple developer meetups now and is now working at Flutterwave, unable to organize the next meetup because work obligations. So he was open when Chris Nwamba (Codebeast) reaches out offering help. Delivering  “beyond expectations,” according to Olalere, Nwamba became the first ForLoop Lagos Lead, joining the ForLoop board along with other early volunteers including Nosakhare Obaseki, Adewale Martins and the late Mubarak Imogie.

“From food for the events, the website, transporting themselves and everything else that’s had to do with ForLoop, every one of these people contributed voluntarily out of their pockets to make it all happen,” said Olalere. “Because they saw a problem and knew no one was going to fix it. Without each of these people, none of it would have been possible.”

As ForLoop continued to grow, Olalere turned his attention to university-based developer communities teaming up with a former Bells University classmate, who was now lecturer at the university, to hold the first ForLoop Campus event in 2016.

“So many students showed up for that Bells University event, including Covenant University students. They said they wanted a ForLoop meetup and before we knew it other universities were also indicating interest and it just kind of took off from there,” said Olalere.

Along with support from incubators and financial institutions, a talent pipeline is important to the existence and growth of any tech ecosystem. In Nigeria, ForLoop Africa is the largest developer group, connecting local chapters with members across eight African countries and a 2,500 user-strong Slack community. Since being founded by Ridwan Olalere in 2016, the ForLoop community has held hundreds of meetups, trainings and hackathons yearly. The non-profit has also remained front and center of advocacy conversations in Nigeria with help from developer evangelists like Prosper Otemuyiwa.

What is most interesting about ForLoop is how it has uniquely positioned itself, intentionally, to play a role in a developers’ entire journey from beginner to full-fledged professional. In the words of Leila Janah, “Talent is equally distributed, opportunity is not,” and this has influenced the community’s reach into universities to find and support talent, along with attracting mentors and experienced professionals.

Currently, the largest university developer communities in Nigeria are Google Developers Groups (GDG), Facebook Developer Circles (FDC) and ForLoop Africa. It is within these communities that developers, most of whom are self-taught, get their first taste of modern software development through interactions with ForLoop mentors and senior developers. However, where the GDG and FDC communities focus exclusively on Google and Facebook technology, ForLoop doesn’t restrict members to one software or programming language.

Despite incredibly high unemployment rates, a ballooning youth population and growing internet penetration, many tech employers complain of a shortage of technical talent. According to developer training platform, Gebeya, “only one percent (1%) of African children leave schools with basic coding skills…low IT literacy levels have made it difficult for companies to find local, qualified talent to fill these positions resulting in a stagnated growth or increased expenses due to outsourcing talent from developed countries.” By reaching the software developers of the future through its university programs, ForLoop is able to support would-be developers at the most formative stages of their careers while providing them with access to the larger community. As they improve their skills, ForLoop offers access to freelance work which helps them stay at the forefront of software engineering and build a work history in the field.

In 2019, ForLoop will see founder Olalere stepping down from the board, handing things over to Prosper Otemuyiwa, ForLoop’s Director of Evangelism. “The plans has always been to ensure that the community can sustain itself. So, just as I am stepping down right now, Prosper will also step down at some point in the future for another person to take the reigns. And that person will step down for another person and so on,” Olalere said.

Across the globe, communities remain critical to sustainable developer ecosystems. But how they approach the talent gap is different. The ForLoop Africa model of accompanying developers through every stage of professional growth, positions it as a “village” that truly “raises” the child, fulfilling Olalere’s original goal to build an inclusive, engaging and vibrant community of developers across Africa.