Rwanda Must Pick a Side in its GMO Debate 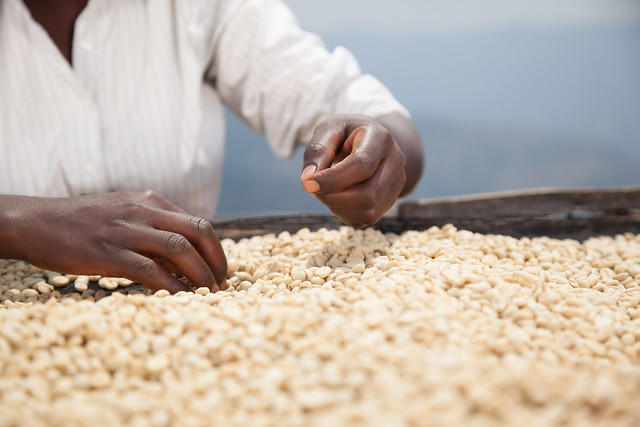 Like a phoenix, Rwanda is fast rising towards a future that is inclusive, innovative and self-reliant. It is in this vein that last year, the Rwanda Environment Management Authority (REMA) began drafting a law seeking to regulate the country’s use of genetically modified organisms if and when it adopts their use. This policy framework would guide the import, distribution and cultivation of genetically modified crops in the country. Not many Rwandans are excited about the prospects of GMOs, even as a measure to ensure food security in the region, as the Ministry of Agriculture says.

“You can’t forever stick to crops and methods of farming that our forefathers practiced in 1900,” says the Rwandan Minister for Agriculture and Animal Resources, Gérardine Mukeshimana.

While some groups’ sentiments are around the long-term effects of consuming genetically modified foods, many are more concerned, and legitimately so, about the politics of this industry given that only a handful of multinationals control the production of genetically modified seeds across the globe. With its current clean slate – no GM crop has been introduced into the country yet – the government must take a critical look at both sides of this passionate debate before deciding which side it will fare on.

Agriculture biotechnology is a broad term used to describe techniques such as genetic engineering, tissue culture and molecular markers, employed to impart resistance (pests, drought or flood resistance) to plants, animals and organisms; or sometimes to improve nutrient quality as is the case with genetically modified sorghum and golden rice, which are enhanced with high content of vitamin A, iron and zinc. Around the world, GM crops are grown by approximately 18 million farmers, and imported or researched in more than 75 countries.

Golden Rice, so named because of its distinct golden yellow colour, is modified to produce β-carotene which is converted to Vitamin A during metabolism. 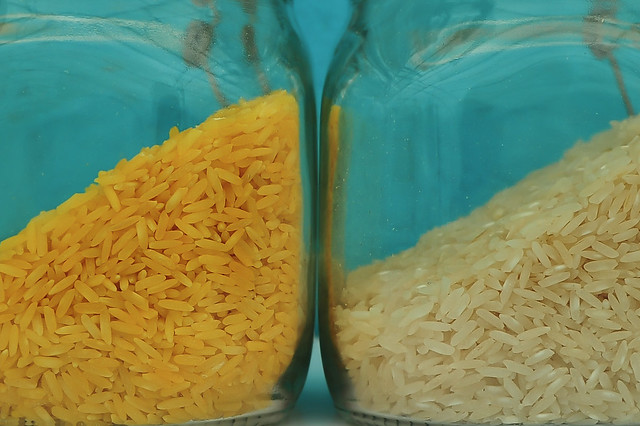 The world population is projected to reach 9.7 billion by 2050, with Africa accounting for more than half of this population. The Food and Agriculture Organisation of the United Nations (FAO) says the world will need 60% more food than it currently produces to feed its new entrants. Yet, arguments that the growing of genetically modified crops will help solve its food security challenge isn’t rooted in reality.

“GMOs aren’t silver bullets to tackling food security; it is only one tool in a breeder’s toolbox,” says Modesta Abugu, a Programme Assistant at the Open Forum on Agricultural Biotechnology (OFAB), a pro-GMO organisation with chapters across Africa. Nonetheless, GM crops have been credited with increased food productivity and reduced losses from pest attacks and adverse weather conditions.

“We provided some of our farmers with the Tenera variety seedlings for oil palm cultivation which was genetically modified by the Nigerian Institute for Oil Palm Research (NIFOR) with a 3 years gestation period and recorded a 40% increase in yield compared to their originally cultivated 7 years Dura variety with lesser yield,” says Comfort Kureve, Co-Founder of Farmignite, an agricultural company which helps individuals set up their own farms, invest in already existing ones and provide consultancy and training on farming practices.

Farmcrowdy, a Nigerian-based digital agriculture platform, says their farmers have yet to use GMO seeds or animal feed, although they cultivate hybrid seeds from certified seed companies. These hybrid crops are responsible for unusually large fruits and vegetables like tomatoes and mangoes which many assume are genetically modified.

But this is only one side of the argument. That a particular pest-resistant gene has been incorporated into a crop does not mean that it is averse to attacks from other pests. As with antibiotic resistance, pests can evolve to become resistant, resulting in the need to use increased quantities or stronger pesticides. Also, while there is still not enough scientific evidence to suggest that the consumption of GM foods can lead to serious health conditions, anti-GMO groups insist that studies about their effects on animal life are enough indication of how potentially harmful they could be to humans.

Vengeful Maruca Vitrata (aka Pod Borer) attacks on Cowpea has led to the development of a pest-resistant variety, Pod Borer Resistant (PBR) Cowpea (aka Bt Cowpea). Gbadebo Rhodes-Vivour, Coordinator of GMO-Free Nigeria Alliance has been campaigning against the adoption of GM crops in Nigeria since 2014. One of his major grouses with GM crops, as expressed by some of the Rwandan population, is the resulting control and dependency on multinationals like Monsanto and DowDupont for seed crops.

“When a multinational organization (whose main motivation and sole concern is maximizing profit at whatever cost) is given the power to solely control the supply of seeds, they would eventually control life itself,” he says.

“Many things humans do, use or consume are optional. Feeding is not one of them.”

Together with two other companies, Monsanto currently controls more than 60% of the global seed market following a series of consolidations that saw it being bought over by German pharmaceutical giant Bayer in 2018. In addition, Monsanto sells sterile, pricier seeds that cannot be replanted, and farmers who go ahead to replant can be taken to court.

“For farmers in developing countries like Nigeria, organisations like the African Agricultural Technology Foundation, a not-for-profit, brokers the technology for small-holder farmers, obtaining the technology royalty-free from multinationals like Monsanto and passing it on to smallholder farmers at subsidised rates,” Abugu says.

With arrangements like this and farmers maintaining autonomy over their activities, Abugu argues that this dependency is a myth.

Every country exercises sovereign control over its development, release and use of GMOs through unique biosafety laws and instituted regulatory agencies. For transfer of genetically modified organisms across borders, countries have to agree to the terms outlined in the Cartagena Protocol, to which Rwanda is a signatory. The Protocol establishes an advance informed agreement (AIA) procedure for ensuring that countries are provided with the knowledge necessary to make informed decisions before agreeing to the import of living modified organisms into their territory.

At the core of this persistent battle over GM crops seems to be a kickback against the idea of interfering with the natural progression of plant and/or animal life and its inherent harms alongside the eagerness to exploit technology and innovation to improve agricultural output. For countries like Rwanda with its clean slate, it is paramount to have inclusive and thorough conversations about GMO adoption as it draws up its laws.

“We want truth, we want an honest conversation that looks into all these considerations and puts the health and well being of Nigerian citizens first,” reinstates Rhodes-Vivour when asked what anti-GMO factions really want.

The same should ring true for Rwanda as it negotiates the food security of its people.