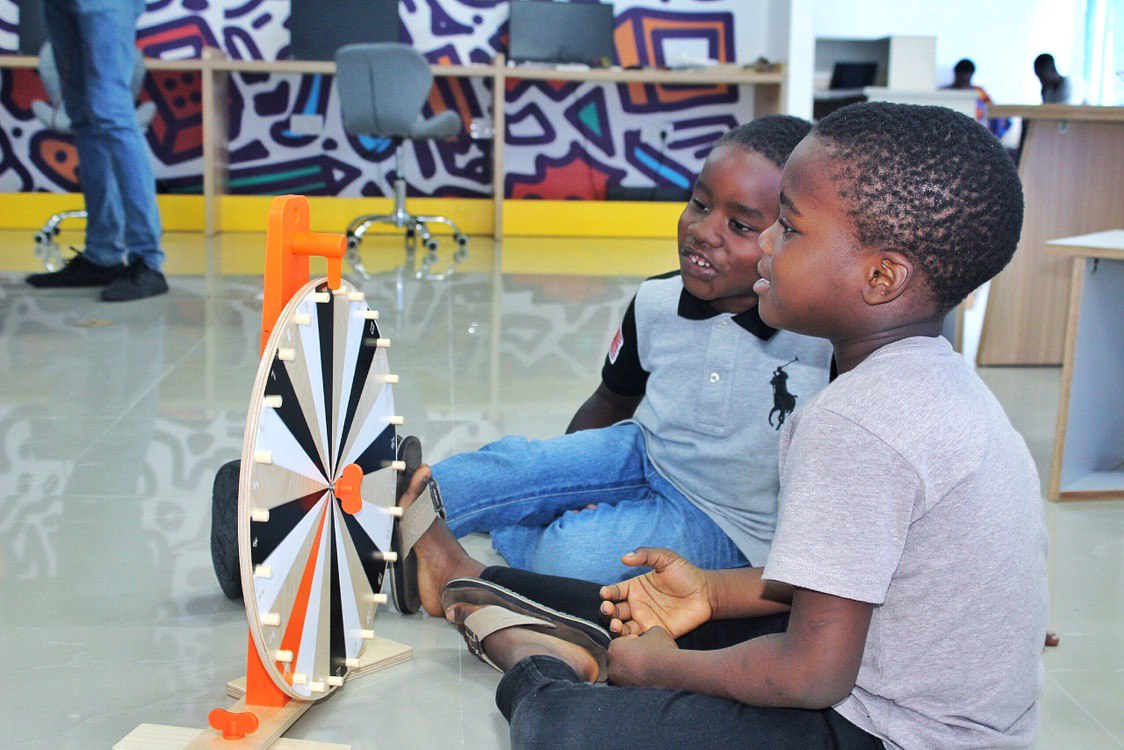 It’s a sunny Monday morning in Lagos. The city is gradually peeling off the pseudo-drowsiness of the weekend as I make my way through the impatient honking of horns of late morning traffic. Inside STEMCafe—the brainchild of Bosun Tijani, CEO, CcHUB—on the first floor of Enyo Service Station along the Lekki-Epe expressway, I leave the noise behind and enter a moderately spacious room where six toddlers and teenagers are getting started with their daily tasks.

It’s a children’s holiday in Nigeria and also midterm break for a number of schools. But instead of staying home to play or watch cartoons, parents are opting to bring their children to the newly opened cafe where kids are introduced to STEM (science, technology, engineering and mathematics) concepts through a variety of fun activities. I tell Ebere Nkoro, the cafe Manager I’d like to see projects from start-to-finish, and in the four hours I spend there, I get to see a few.

For the first hour, Akinolu, 5, is engrossed with pieces of an airplane he is attempting to assemble. By afternoon, and despite having coupled more than half of the parts to complete his task, he’s resorted to a break and needs some convincing before he returns to his task. 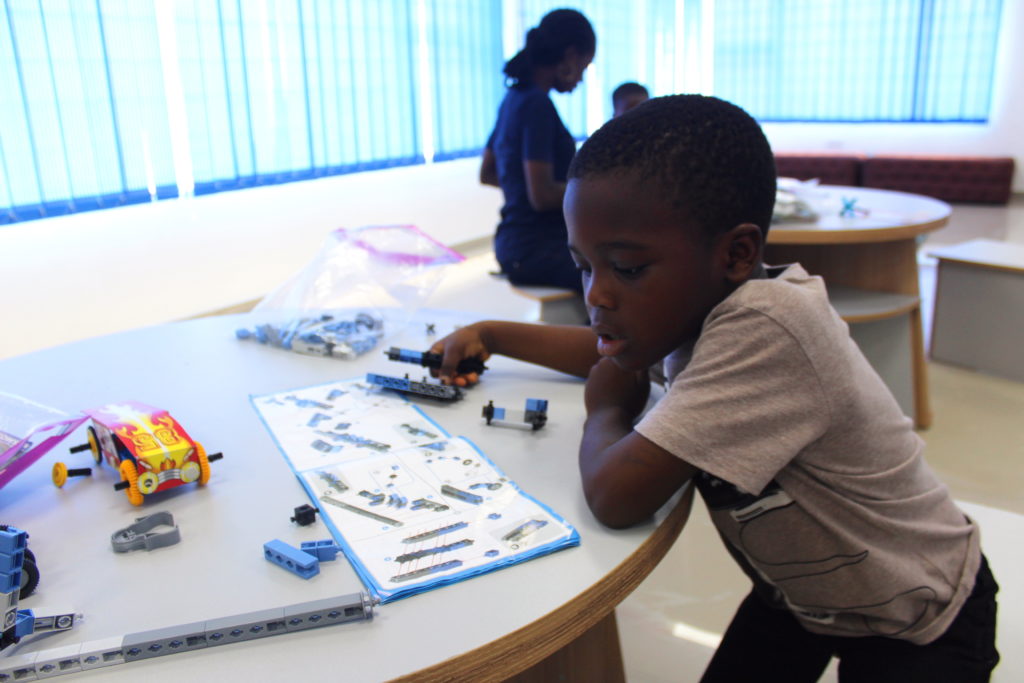 “You know, their attention span can be short,” says Ope, an amiable staff. Adeleye, a quiet five-year old, has also been trying his hands at assembling an airplane but securing the miniature parts is proving rather difficult. Ope says the much younger kids sometimes find it difficult to push in the pieces of the airplane unlike the older kids. She shows him a more practical way to twist and push the parts into place and lets him figure out the rest on his own. Now back at his table, Akinolu admits to making a mistake previously and that’s why he abandoned the project. He seems pleased when he finally completes the airplane and eagerly shows it off to his mother when she picks him up. 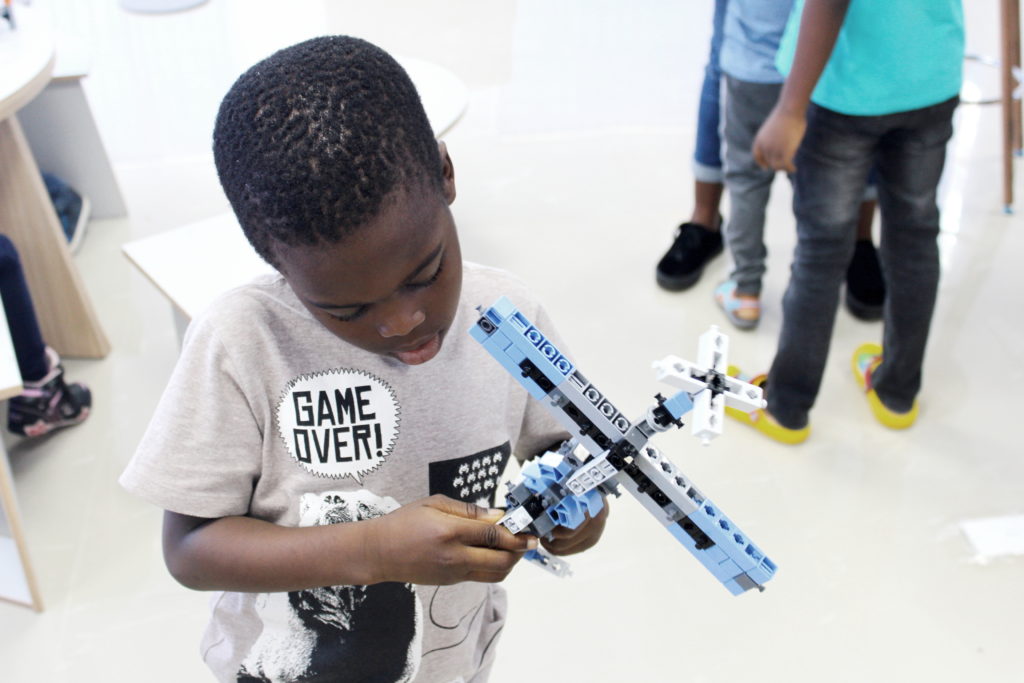 After tinkering for a while unsuccessfully, Adeleye moves on to something else–piecing together a ship. He completes this rather quickly and there’s satisfaction on his face as he waits eagerly for a bowl of water to try to sail his ship. Satisfied with the brief sail, he wants to try moving his ship with propellers instead and starts to dismantle and rebuild the ship, with Ope’s help, but runs into another snag. He becomes growingly frustrated by his inability to make the propellers move as fast as he wants. Ope tries to cheer him up by reaffirming his understanding of how the ship moves using both the sail and propellers. 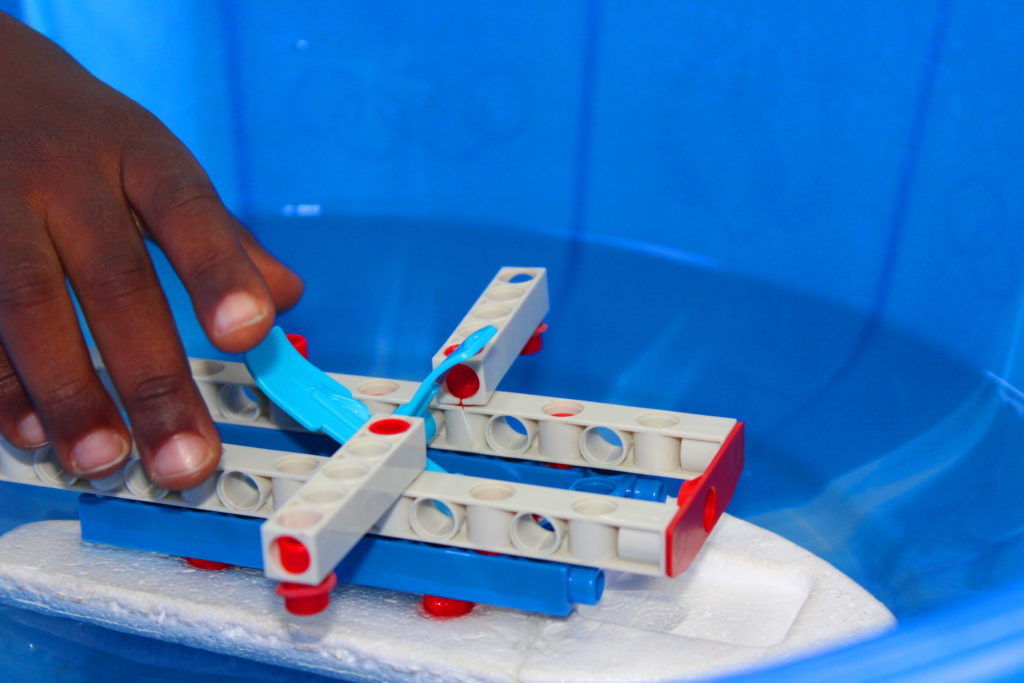 “Think of a solution,” David interjects. Also aged five and quite the talker, David is the first to complete his task for the day–building a train track–and does not hesitate to find other activities to keep busy with little to no assistance from staff. 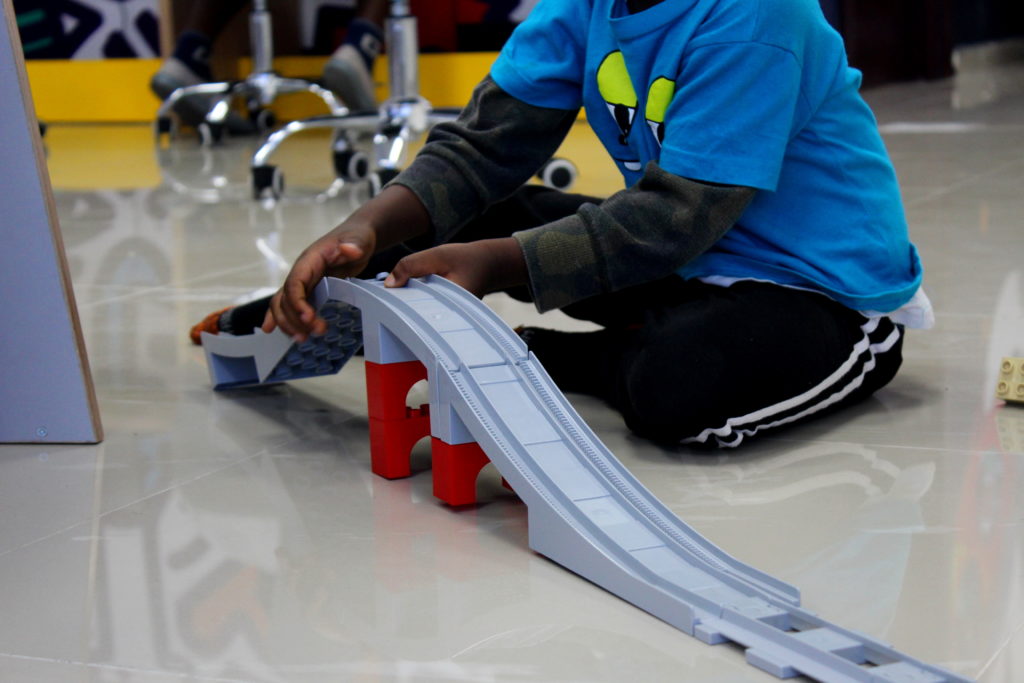 Gbemisola looks at a complex sketch of a vending machine on a computer. Behind her are cut-out pieces from brown cartons, all appropriately labeled. She will need to assemble them into a chocolate vending machine in the few hours she’s at the cafe. Shalom, a staff at the cafe, debriefs her, urging her to be careful with a mini glue gun she’ll use to hold the parts together. 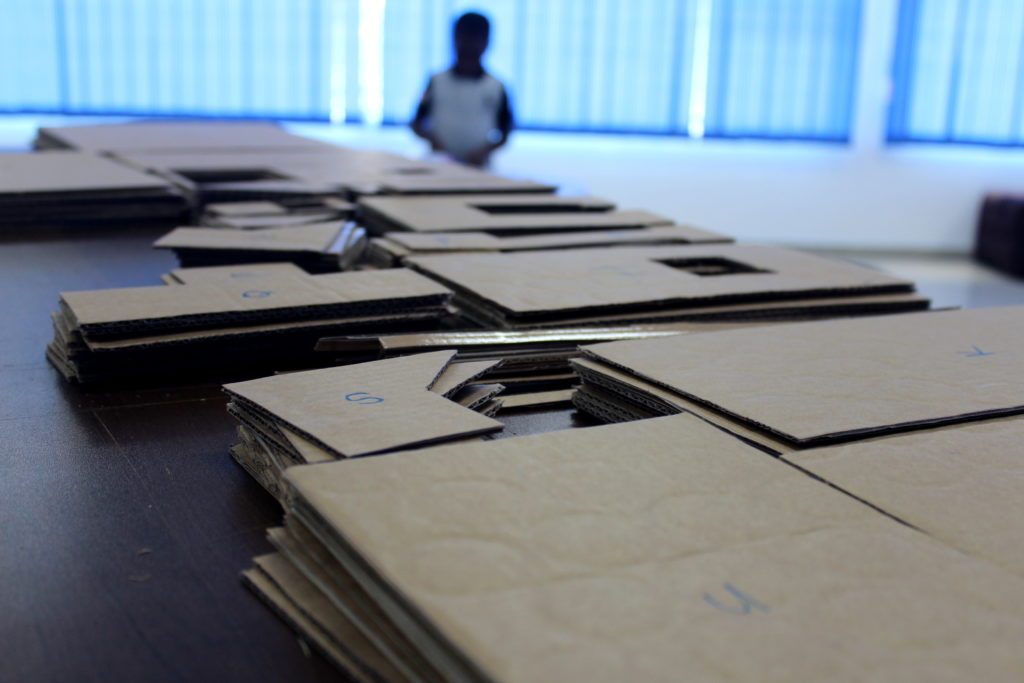 Gbemisola glances at the screen as she picks and matches the pieces together as fast as she can. One wrong turn later, and the machine is deconstructed so she can begin again, this time more carefully. The lessons materialise as she goes on. The sketches may be complex but they are there to guide the children in making a completely functional product. Mistakes aren’t final, but patience is required in product design. A few hours later, Gbemisola is joined by a quiet-looking second grader, Demilade, who has visited the cafe three times so far. Both are paired together to complete the vending machine and the project moves along much quicker, with the help of Shalom. 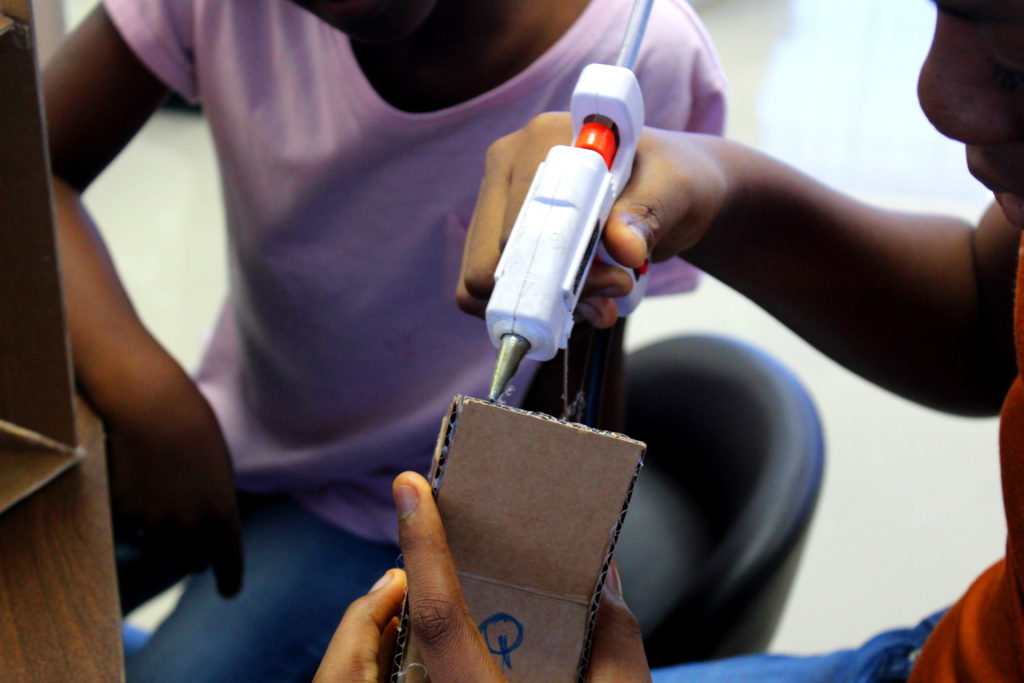 Gbemisola’s time for the day up, Demilade is left to finish the task of trying to make sure all the parts are fit and improvising to ensure the machine is functional. After a hard day’s work, there’s a bar of chocolate for the win. 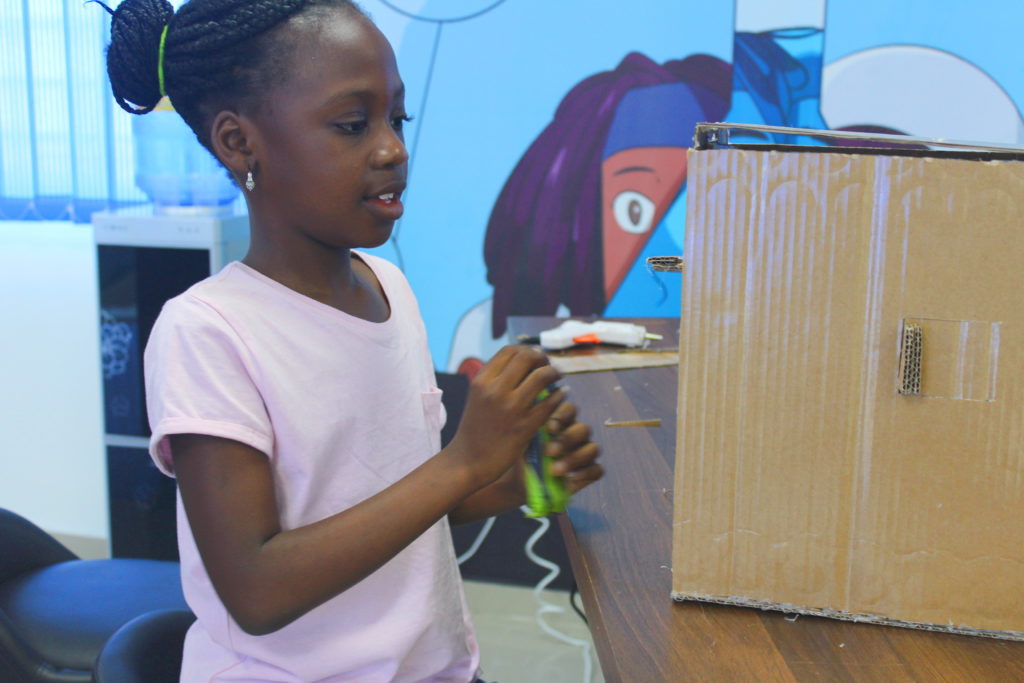 By midday, more kids have arrived and it is time for a group project.

There is no definite curriculum used at the cafe, Nkoro says. It’s nonlinear. Children are encouraged to pursue activities that interest them and there is a wide variety to choose from–assembling airplanes and ships to 3D printing and building IoT systems, appropriate for the 5-18 age group the cafe targets. These activities cover a wide range of concepts in physics, chemistry, mathematics, and sometimes, a bit of programming. 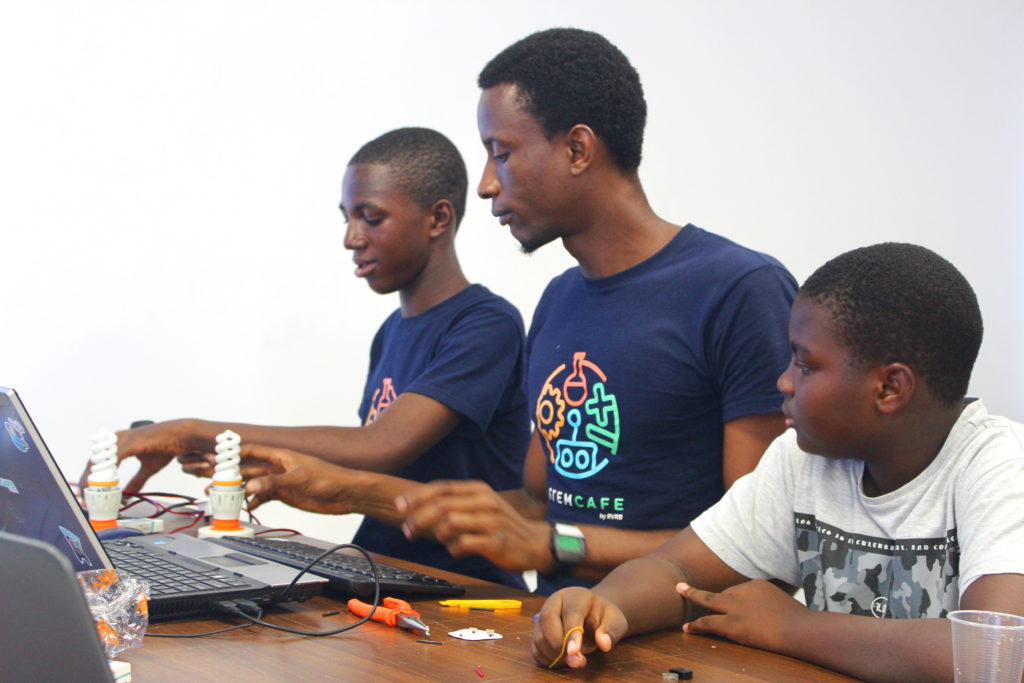 “The idea really, is to spark interest in STEM,” confirms Nkoro.

The hub is open every day including Sunday with peak periods during academic breaks and holidays. Originally part of Cc-HUB’s re:learn programme, Shalom says her off days are few and far between but she enjoys working with the kids. The re:learn program affords university graduates interested in becoming STEM educators a one-month opportunity to learn and get placements with reputable schools across the city. Nkoro says every staff at the cafe has passed through re:learn. In the near future, STEMCafe is looking to open more outlets on the Lagos mainland and in Abuja, the capital city. For now, the latter is much closer to actualization.

“We already have a place to set-up immediately in Abuja that’s why it’s coming before the [Lagos mainland],” Nkoro says. A lot of the kids already come from the mainland and parents sometimes have to wait for their kids for an hour or more, defeating the purpose of having them at the cafe and keeping them from their daily activities while the kids are engaged.

“So, we’re looking for an appropriate space and somewhere definitely bigger.”

Discussions around the future of work have largely been centered around the rise of artificial intelligence, robotics and how these may replace human labour in the near future. At other times, it revolves around the gig economy and remote work. But according to the World Economic Forum, the skills required for the future of work are also changing rapidly. By 2022, complex problem-solving, innovation, analytical thinking, reasoning, ideation, initiative and social influence will have replaced traditional skills required for success in the workplace. And every activity at the cafe is helping kids develop these skills one fun activity at a time. 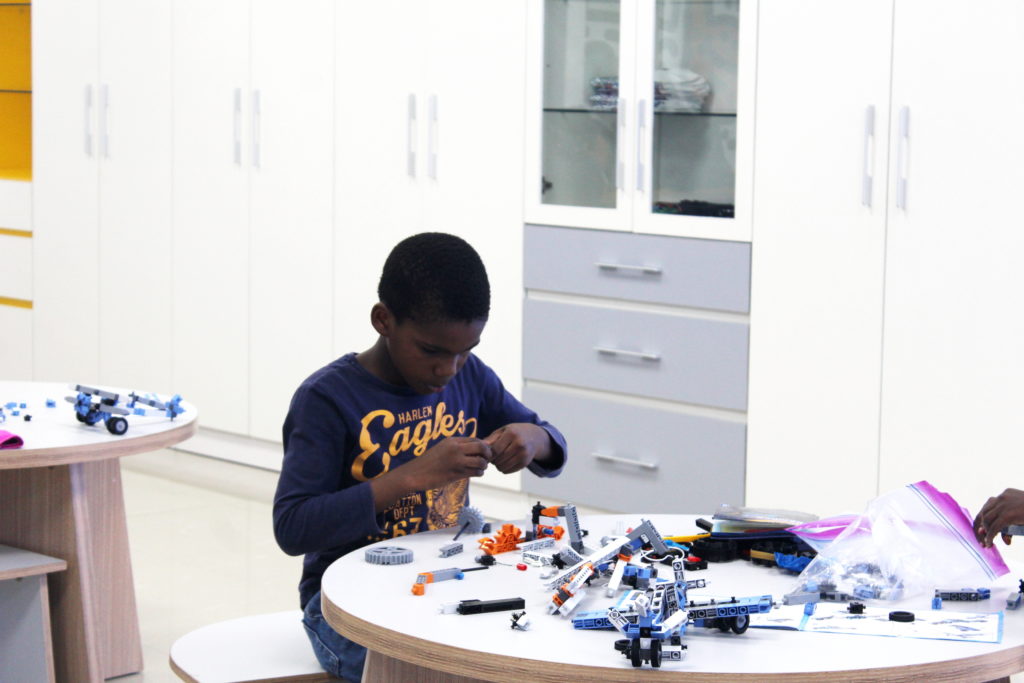