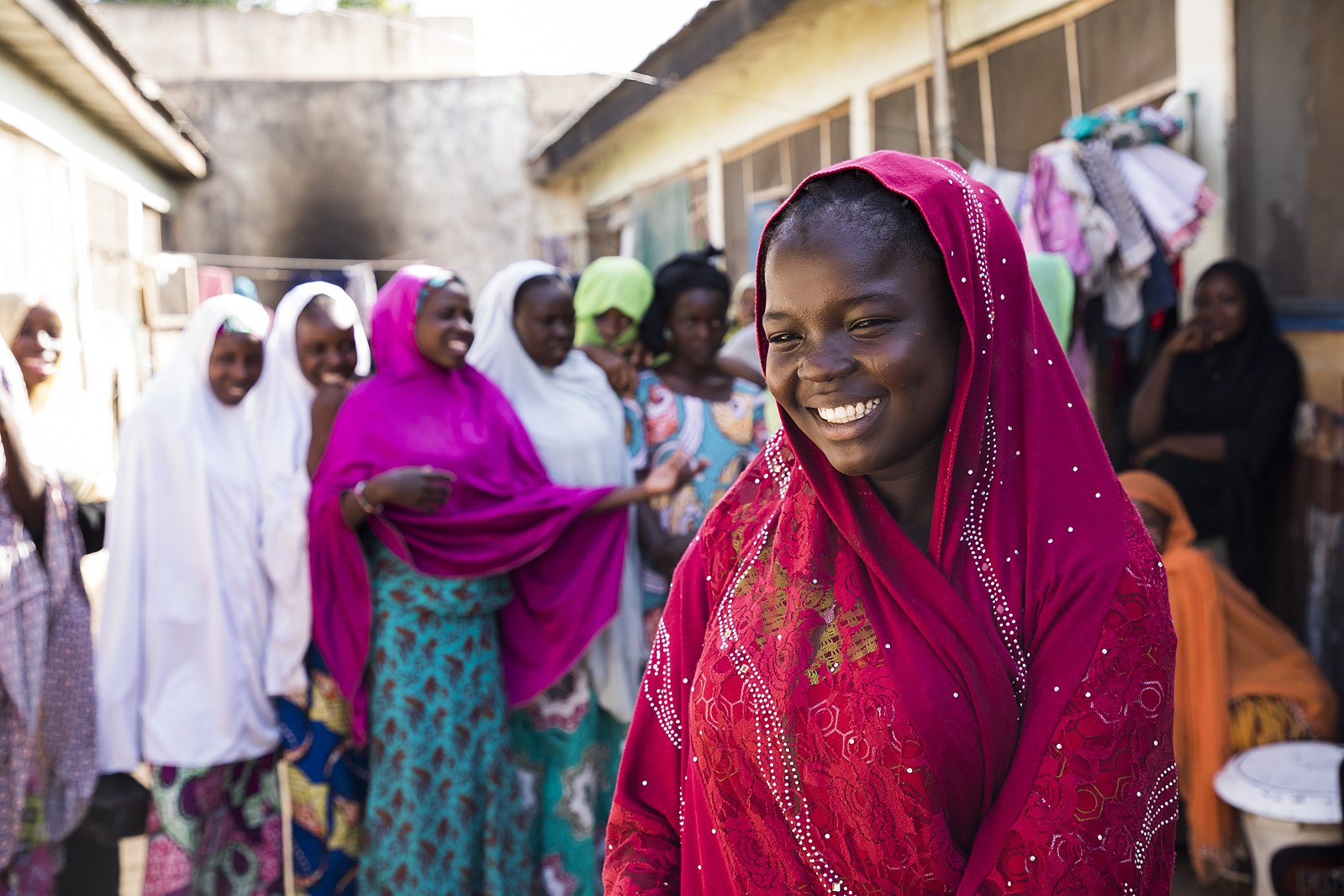 Hadiza Garbati has her roots in Kano, northern Nigeria, but grew up in the country’s economic hub, Lagos. A chemical engineering graduate, Garbati has spent more than a decade navigating a career in the power, oil & gas sectors.

She has all this time been without, as she puts it, having anybody to look up to who was female, Northern, older, with as much or more local and international career experience and renow as she’s been able to garner over the years.

“All my mentors (men and women) were people from different regions,” she says.

Not knowing how to navigate wearing a scarf underneath a helmet on a rig may not seem like much but the limitations of this lack of cultural nuance and representation for Northern female would-be engineers, scientists and mathematicians is what she now hopes to tackle through the Kabara Community Development Initiative, a non-profit organisation seeking to drive educational and economic transformation in the north through STEM-D education as well as through interventions across a number of other economic sectors.

Garbati works with a team of secondary school friends who come with very varied skill sets, experiences and expertise in finance, engineering, policy development, economic sustainability, mining and construction among many others.

Kabara’s approach to STEM education is a mixture of Science, Technology, Engineering, Mathematics, and Design, which is fulfilled through its partnership with Kian Smith Trade & Co, a gold mining, trading and consulting company in Nigeria.

“We have a very natural artistic element to ourselves in Africa and we fill that from the minerals perspective, if we are able to build a downstream market for the gold value chain then we are able to allow people with their own natural talent hone it and that way we are able to mine, process and sell gold here in Nigeria,” Garbati says.

Historically, much of the wealth of West African empires from the medieval Ghana Empire to Mansa Musa’s Mali and the Songhai Empire were built on gold trade. In the Ghana Empire, gold was often traded for another valuable commodity, salt, which the Sudan and southern West Africa region lacked. Mansa Musa was so wealthy in gold that he drove down the value of the metal in Cairo on a pilgrimage to Mecca in 1324 CE. Knowledge of gold mines were often a secret until the monopolies controlled by these medieval empires started to disintegrate.

Today, a lot of gold mining and trading particularly in northern Nigeria is artisanal and small-scale, often kept in the family and handed down from one generation of miners to the next.

According to Nere Emiko Teriba, Managing Director of Kian Smith Trade & Co, there are a lot of fractures in the gold mining value chain and one of the ways the company is looking to close these gaps is through the adoption of technology tools that will digitize the process and bring the many disjointed parts of the value chain together.

“We realised a lot of jewellers were saying, ‘we can’t even access gold to make jewelry’. Because they need small volumes and because of the economics of gold, most of the mined gold goes towards the big traders,” Teriba says.

Has technical know-how limited the adoption of these technologies especially for digitally non-savvy artisans?  Could it? Teriba says it is a matter of simplicity, useability and mobile-friendliness. As long as a tool is solving a need and increasing business opportunities, these are incentives that are hard to ignore.

“We had a tool, Zokia, created for our artisanal miners to connect them,” she says and people said the artisans wouldn’t use it.

The tool allowed miners connect with each others and access resources as well as business opportunities.

Users, regardless of tech savviness, age or social class, always favour tools that are easy to navigate.

Who are the programs for?

Kabara’s STEM-D programs target northerners who by virtue of their social standing, do not have the opportunity or means to explore STEM education.

The initiative has two centers; one in Kano and another in Lagos with the intentions of doubling this number in the coming years. The dynamics of running both are somewhat different but are all within cultural and religious margins.

“The Lagos center really focuses on girls between the ages of 13-18,” Garbati says.

“What we’re trying to do is to take that focus from getting married once you leave secondary school. We’re not saying not to get married but that it’s possible for you to be able to further your education.”

Hence, one of the core milestones for its Lagos hub is the number of girls who go on to gain admission into university. This year, about 18 girls have been enrolled in lessons in preparation for the Universal Tertiary Matriculation Exams, a prerequisite for admissions into institutions of higher learning in the country.

The girls are typically children of migrant northerners working in the city who by virtue of spending a number of years living in the north may have lacked access to such opportunities.

Programs are run on a monthly basis and include courses in personal development, writing, presentation skills, robotics, programming and other core technical skills. There is also the sorely needed element of mentorship here where the girls are assigned to mentors who are women working in STEM for one-on-one mentorships. Much of the progress in this area, however, has been stalled by the COVID-19 lockdown and social distancing measures.

“We’ve also had two of our girls partake in summer activities at FMDQ for fintech training on stocks and bonds,” Garbati says.

“So, [the] Lagos [hub] is more of exposing our girls to all the opportunities that more privileged kids would usually have in this environment at no cost.”

With movement restrictions and inability for trainers to meet physically to continue classes, Garbati is now pursuing partnerships, both local and international, to keep them going online. Courses are around introduction to small business finance, coding and technical skills set training for the job market although one of the immediate challenges of this route is a language barrier in the Kano hub and the need to have indigenous trainers take courses in Hausa.

From July 30 till August 2, both Kian Smith and Kabara, together with a number of other partners are hosting a gold durbar in the city of Kano. In September, another will take place in Ouaga Doré, a gold market in Burkina Faso.

According to Teriba, the purpose of the durbar is simple: to wholistically remind Kano of its gold heritage but also to show its future potential especially through the use of digitization in mending the many fractures in its value chain.

“We are saying instead of discussing how to take Almajiris off the streets, for example, let’s give people an opportunity to earn a trade that is convenient with their culture and religion,” Garbati says.

“A woman stays in the confines of her home and once she’s learned these skills she’s able to manipulate the gold to create designs and sell them through IT systems and structures all within the comfort of what her religion and culture will permit.”

The durbar will feature opportunities for miners and traders to sell, artisans (including women and girls from Kabara)  will be commissioned to create pieces for Kian Smith’s Empires and Warrior Queens Kingdom Collections which will be marketed and shown across West Africa in a cultural gold festivals leading up to a November auction in Lagos.

Where do the training funds come from?

As a non-profit, Kabara’s activities are largely funded by donations.  Partnerships, like one with the Mohammed Inuwa Wada House which is where the hub is situated right at the center of Kano, also form a part of the means through which its activities are carried out or supported. As Kian Smith’s corporate social responsibility partner, the mining corporation also continues to support its projects and training programs. Part of the proceeds from the gold durbar will also go towards Kabara’s activities.

Nonetheless, funding has been tough to sustain, Garbati says, and more funding will mean a wider reach and scope of Kabara’s activities in the region.

Fast-tracking paths to quality education and skill acquisition for the technology age is very critical to the country more so the north where 69% of Nigeria’s out-of-school children come from. For girls, the figures are even more problematic. Only 45% of girls of school age are enrolled in and attend school.

The pandemic has made apparent the place of technology in revamping traditional learning  systems both in the new forms of knowledge that are needed to build careers in today’s world as well as how this knowledge is obtained.

“In Nigeria, once you say that you want to improve something, the first thing people do is buy hardware,” she says.

Solving the hardware challenge alone, is only a very small part in the direction towards the digitisation of education on the continent.

Garbati says that while there are many laudable initiatives like Kabara, seeking to optimise alternative paths to learning and opening up career and entrepreneurial paths to young people in the region through courses like STEM and Design, consolidating efforts will be more impactful in creating the desired changes in the region and the country.

Kabara (or Magajiya), the title after which the initiative is named, were matriarchal monarchs who ruled the Hausa people inpre-historic times. Queen Amina was one and Magajiya Daurama, the Last Kabara of Daura whose marriage to a prince from Baghdad, according to folklore, transitioned rulership to the patriarchy.

Today, in the traditional setting in the north, rulers from a matrilineal bloodline are now referred to as Waziri, what would’ve been a Kabara which was almost obliterated post-Islam.

While these histories are relevant and inform some aspect of the work that both Kian Smith and Kabara does (the Warrior Queen Empires Collection is inspired by this), Garbati is careful to note that the goal is not to exclude a certain gender but to ensure that girls and women, unlike her, get the representation they need to encourage them to pursue careers in STEM and Design.