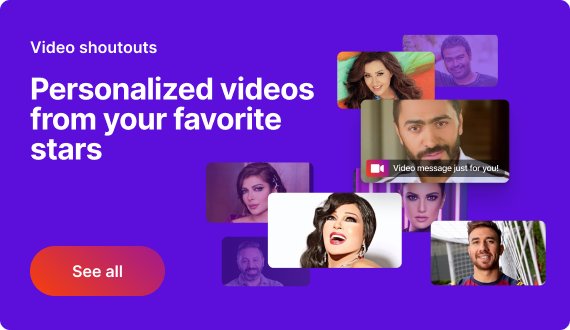 Minly, a Cairo-based celebrity video startup has secured $3.6 million in seed funding co-led by 4DX Ventures, B&Y Venture Partners, and Global Ventures. Other leading regional funds and several angel investors also participated in the oversubscribed round, the company said in a statement on Sunday.

The Cameo-like platform enables fans across the Middle East & North Africa (MENA) to buy personalised video messages and shoutouts – for themselves or their loved ones – from leading celebrities of the region. There is also the option to record reactions and publish them.

“Minly is fundamentally changing the relationship between celebrities and fans in the MENA region, and has an enormous opportunity for growth,” said Peter Orth, Co-Founder & General Partner at 4DX Ventures, who will be joining the startup’s board.

On Minly, celebrities set the prices of shoutouts themselves with some guidance from the startup. It costs $499 to get a shoutout from Tamer Hosny, an Egyptian singer with over 50 million social media followers across different channels.

Alternatively, fans can exchange messages and voice notes with the celebrities on the platform albeit for a fee lower than video shoutouts.

According to the company’s website, Minly makes money by taking a cut from every transaction on its platform and donates a percentage of proceeds earned to charity.

The business of buying celebrity shoutouts through a marketplace was popularised by Cameo, which launched in 2017. The Chicago-based startup has experienced significant growth since then and became a unicorn earlier this year with a $100 million Series C.

Cameo’s prominence has led to the birth to many similar platforms in other parts of the world including the Middle East where at least ten celebrity shoutout marketplaces currently operate.

Apart from Minly, players in the space include Starzly, Halahi, and Starprise, all of which try to differentiate from one other by acquiring the exclusive rights of celebrities for their platforms.

With the new funding, Minly wants to expand its products and services to become what it says will be a “full-stack passion economy” platform.

It aims to “empower content creators to deliver meaningful experiences across multiple mediums to their fans” and in the process, hopes to become the first unicorn in the space.

“With this new funding and the partners that joined us, we are ready to scale across the region and introduce an exciting suite of new products,” said Mohamed El-Shinnawy, Minly co-founder. “The creator economy is in its infancy and growing at lightning speed. We have the opportunity to build this category’s first unicorn in MENA.”