TechCabal Daily – 🌟 All that glitters is not gold

Later today, Zambians will head to the polls to vote for a president and national assembly members.

The competition for the country’s number one position is between a 64-year-old Lungu who has been in power since 2015, and Hakainde Hichilema — popularly known as “HH” — a businessman who has criticized the incumbent’s economic management. 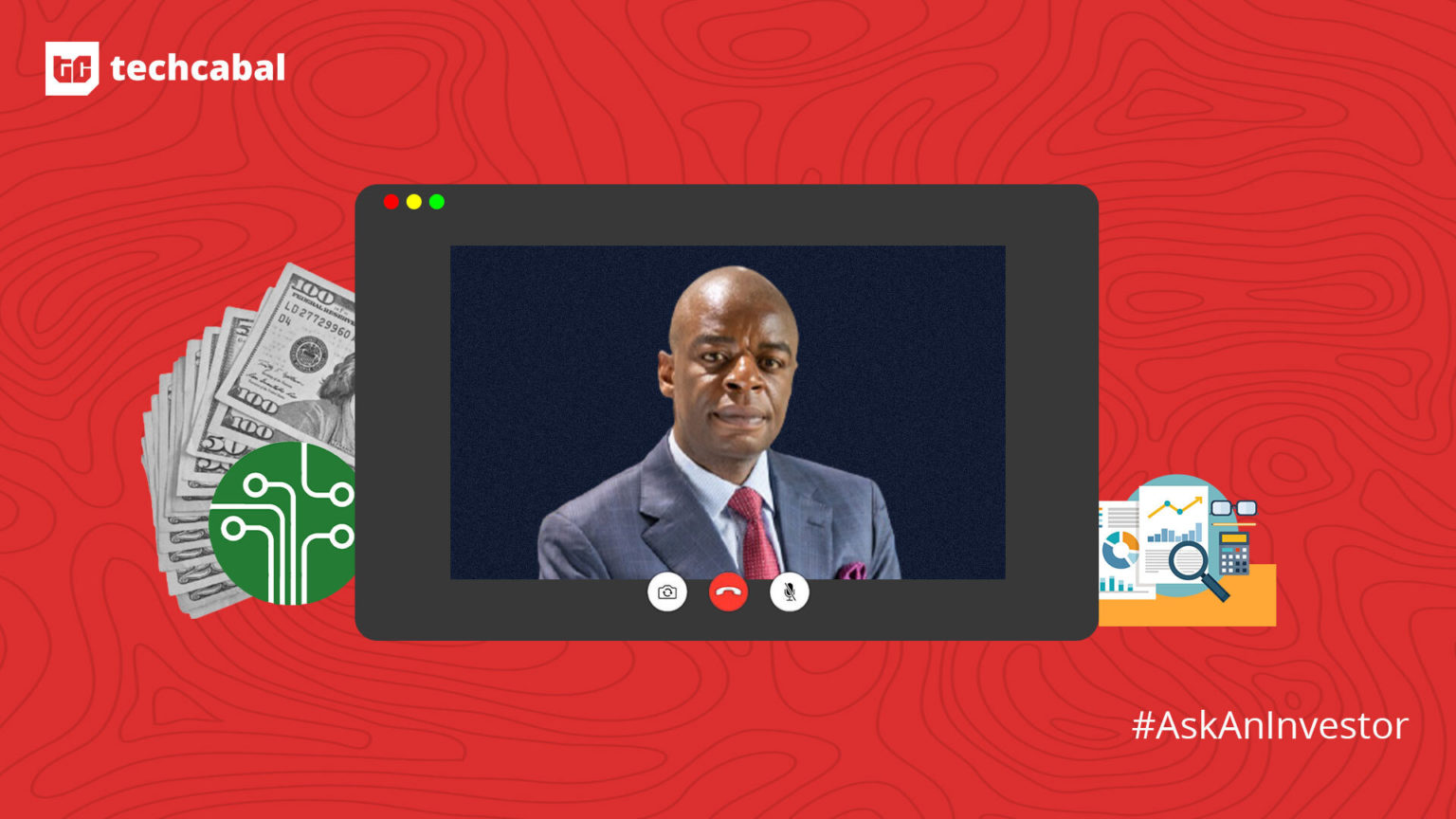 By the age of ten, Adam Molai had learnt that the only way to have his own money was to engage in trading.

Years later, he’ll go on to found Pacific Cigarette company (formerly Savannah Tobacco). Over the past 20 years, he has been investing in African startups and through Jua Fund, he has backed Kenya’s GrowAgric, Madagascar’s Jirogasy, Zimbabwe’s BRYT, Nigeria’s PowerStove, and many others.

A few weeks ago, we had a super insightful TechCabal Live conversation between TechCabal’s Managing Editor Koromone Koroye and Adam Molai. Here’s a glimpse of the conversation:

What’s the roadmap for the due diligence process for startups registered in different countries?

We see this a lot in tech, a lot of people go register in Delaware [US], then when they come and pitch to investors they come as a Nigerian company. Now expect that that company’s due diligence would be done like that of a Nigerian company. Often only after further investigation do we notice that it’s actually registered in Delaware, so we start asking for due diligence requirements for Delaware entities…what we don’t want to do as investors is to invest in one entity not knowing that there are four entities.

How can policymakers improve the landscape for entrepreneurs?

We need to have more confidence in our own people. One of the challenges local investors have is that regulators are familiar with them. They look at them and say, ‘look at this young lad, I know him, he grew up in my village or town.’ So already they’ve minimized what you’re presenting and already they’re not taking you seriously. I think we need to take out some of the prejudices and stop seeing investors from a different environment or background as better.

What are some common mistakes investors make in selecting which startups to fund?

All that glitters is not gold. Investors often fall for presentation bias, some people are fantastic at presenting, others are not great at presenting but have a solid business. Over time investors have to be able to differentiate the substance from the hot air. Often because you’re looking for passion, it’s very easy to confuse passion for great presentation skills.

Learn more about how we can make funding more accessible to early stage startups in Africa.

Curious about fintech in Africa? We’re inviting you to the Decode Fintech roundtable, where we’ll discuss hiring, funding, and international expansion in fintech. 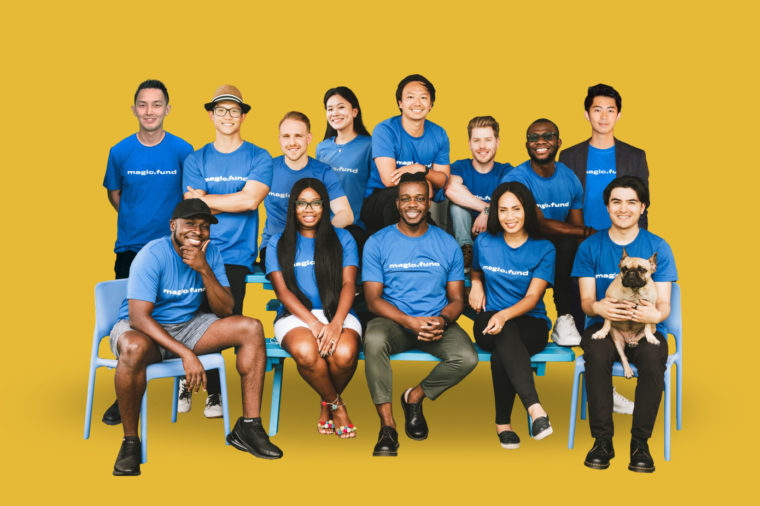 Lack of access to capital is often cited as the biggest reason businesses fail in Africa and other emerging markets.

But apart from funding, it can be helpful for founders in such markets to also get mentoring – preferably from people who have first-hand experience – as they embark on their startup journey with unknowns and untread paths.

MAGIC Fund, launched in 2017, is an early-stage venture capital fund built by founders turned investors. It has 12 founders from across the world who act as general partners with the Co-founder and CEO of Helium Health, Adegoke Olubusi, serving as Managing Partner, and Matt Greenleaf as Operating Partner.

Investment thesis: The fund is built on two theses. One: that pooling funds and resources of individual founder-investors together opens the group to more opportunities for investments, which they could then evaluate better using their diverse skill sets.

Two: it believes that smaller funds run by founders perform best in early-stage investing. Thus, the fund backs startups solving challenges across the world at their earliest stages.

Some of the startups MAGIC has invested in and supported so far include Bankly, Mono, Eden Life, Evolve Credit, Indicina, Bamboo, Chronus Health, Oxygen, and Kiwibot.

In this article, Michael Ajifowoke explains what Magic fund is all about. 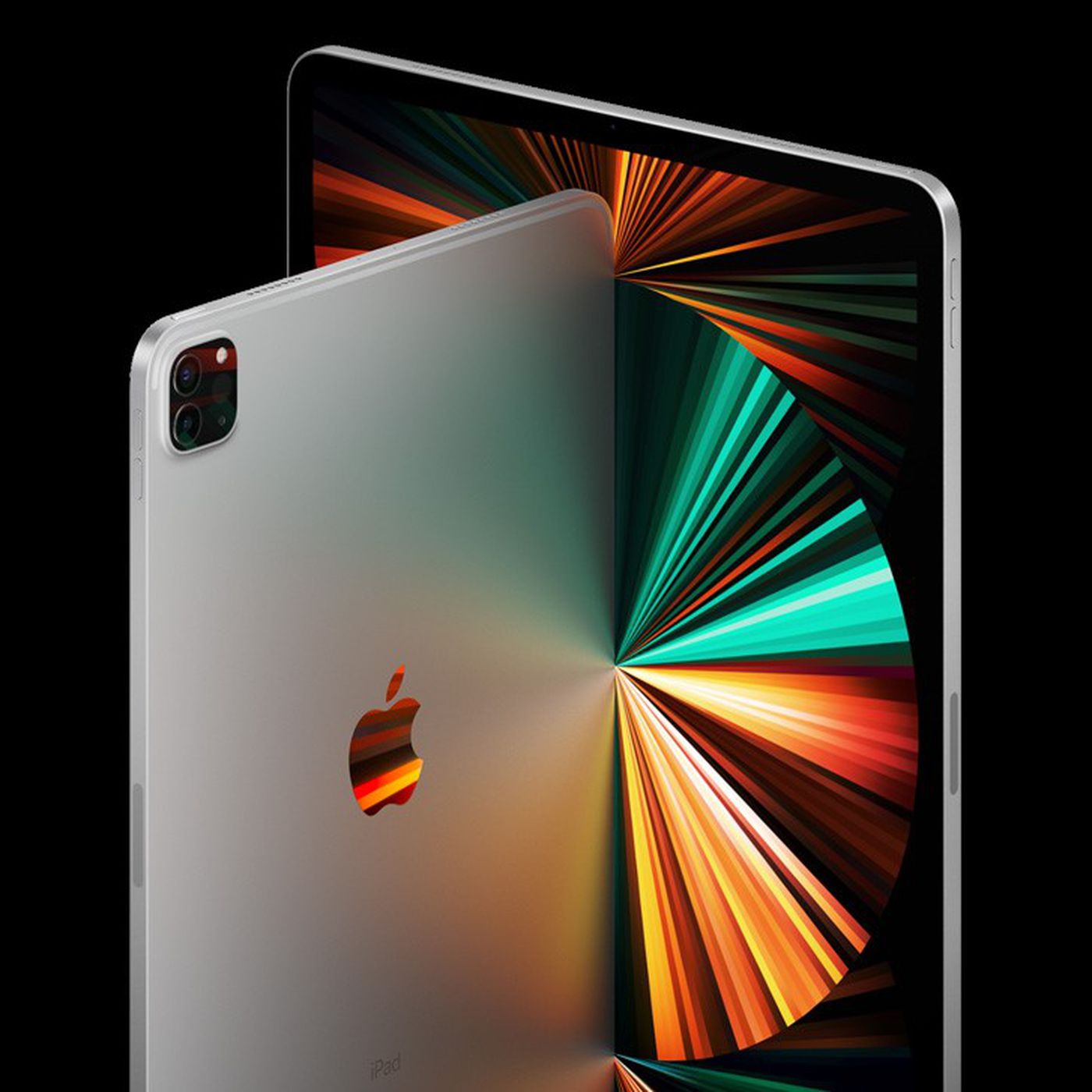 Ten years ago, it was common for every tablet to be called an iPad. I remember how frustrating it was correcting people who called Samsung tablets iPads, I bet there are still some people who do that.

Granted, the first mover’s advantage meant that Apple was first to make tablets widely popular but surprisingly eleven years after the first iPad was introduced, it’s still maintaining its lead in the market. You can’t say the same for Nokia or Blackberry in the smartphone market.

Currently, Apple holds a 31.9% portion of the overall tablet industry. It has evolved over the years producing different designs, sizes, and specs to cater to the diverse needs of its users.

According to the world-leading research firm, the International Data Corporation (IDC), Apple shipped 12.9 million iPads in the second quarter of 2021. Coming closely behind it is Samsung, which hit 8 million shipments. 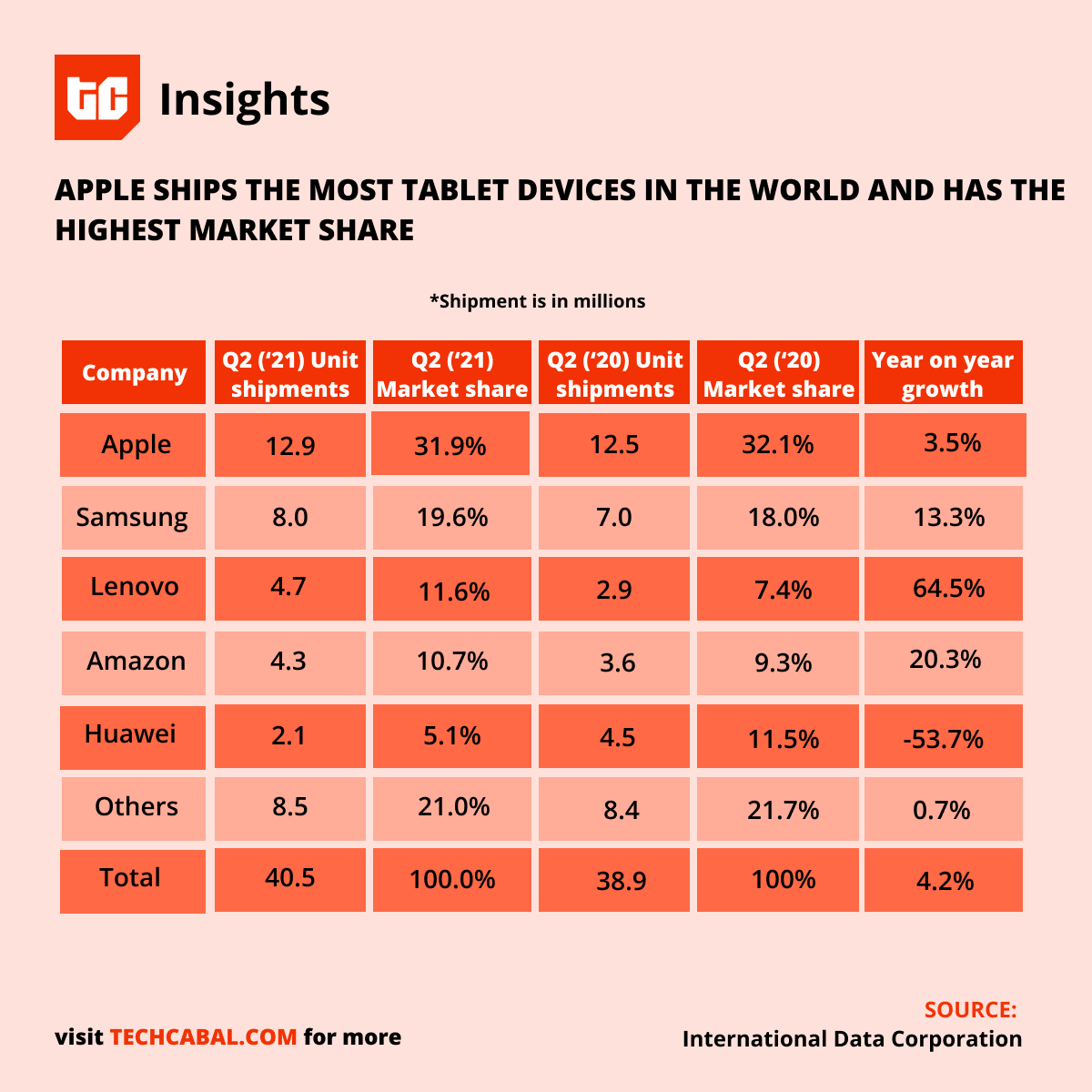 Looking forward: In the past year, both PC and tablet shipments have increased due to the COVID-19 pandemic as people have adapted to working from home and remote education. While the boom continues, there could be a possible slowdown in sales for Chromebooks and tablets due to ongoing chip shortages and a reduction in consumer demand as more people return to the workplace or classroom.

The Best Kept Secret in the World?

There’s simply no doubt about it! Trading global financial markets remains the fastest route to building long-lasting wealth. With Egmarkets, Nigerians everywhere can now trade different classes of assets such as Forex, Indices, Stocks, Commodities & even Cryptocurrencies from the comfort of their phones (or laptops) using our Naira currency or MT4 platform (dollars).

Egmarkets is celebrating its 5th year anniversary and you stand a chance of winning a Playstation 5, iPhone 12 or Samsung S21. To learn more on how to win, click the link here. 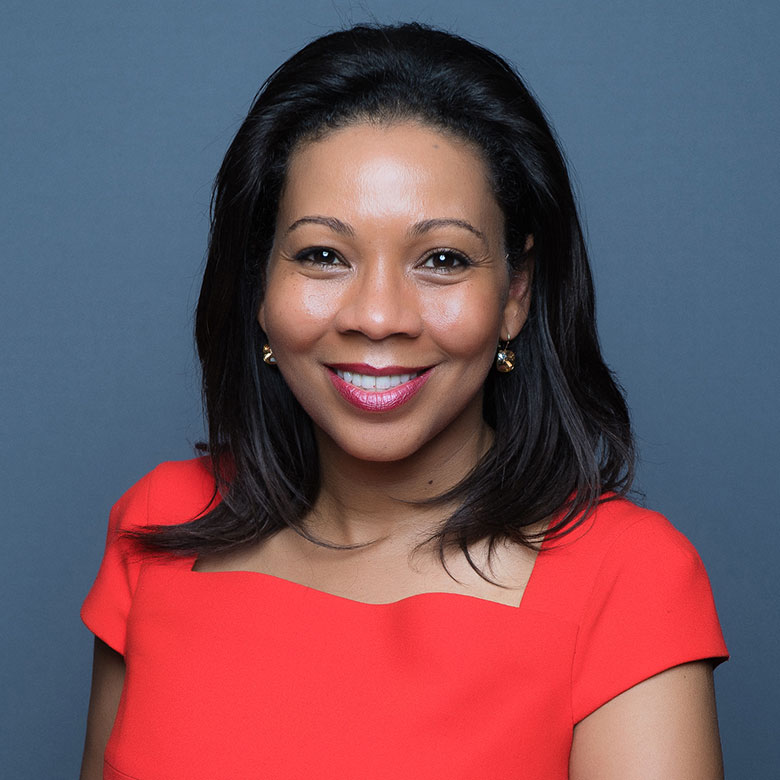 It’s come to our attention that Cameroon’s tech entrepreneur, Rebecca Enonchong, has been detained by the Cameroonian government since Wednesday.

Enonchong, who is the Founder and CEO of AppsTech as well as the Board for AfriLabs, was arrested without any warrants or charges levied against her.

Reports mention that she was invited to the Gendarmerie Legion in Douala on Wednesday where she was subsequently charged and held overnight. She later appeared in court on Thursday to hear charges against her that were not made public. 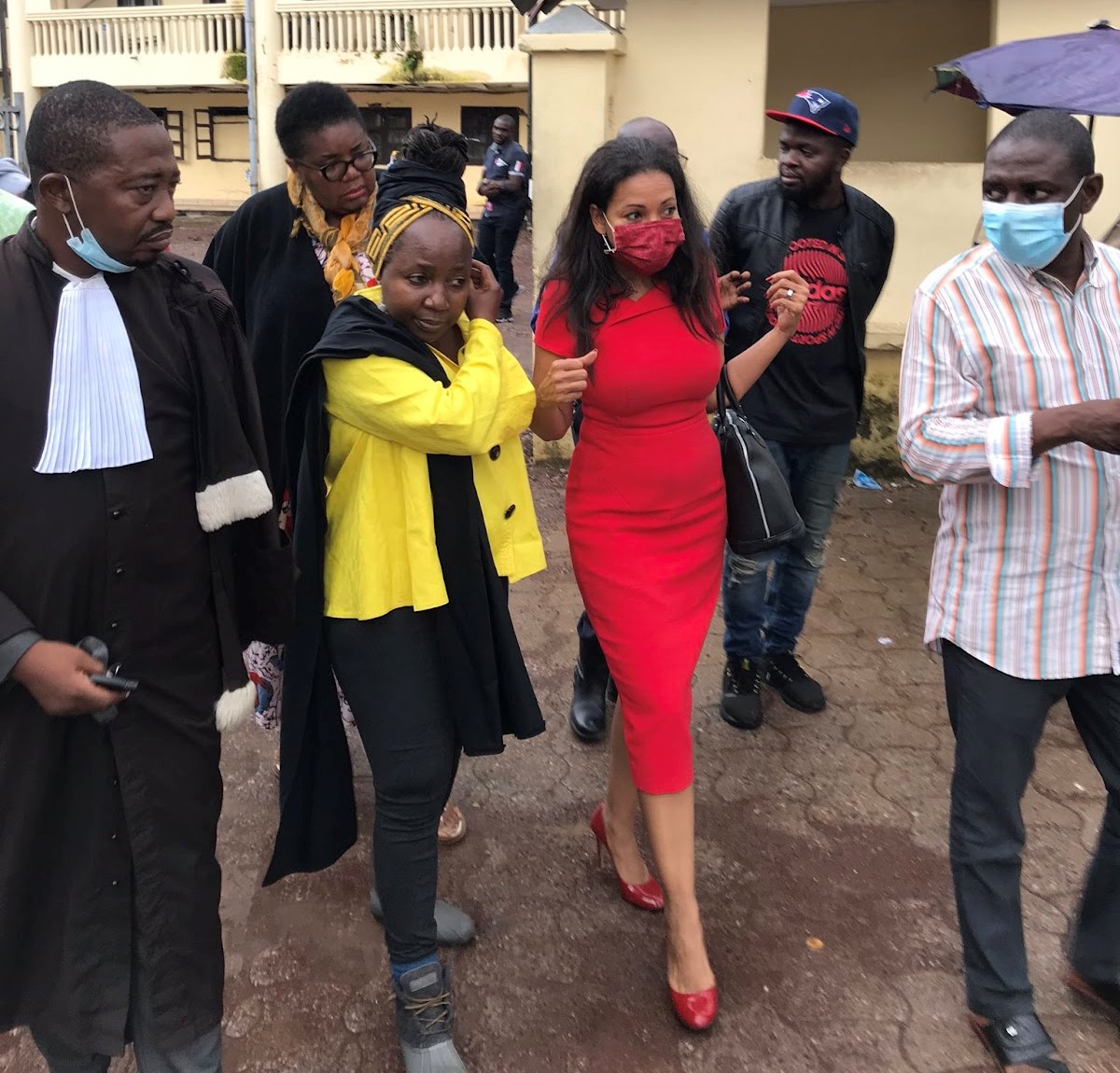 Why is Rebecca in custody?

There’s still a lot of new developments coming up but no official warrants or statements have been issued by the Cameroonian government regarding her illegal detainment.

However, Edith Kahbang ‘Kah’ Walla, President of Cameroon’s People’s Party, was able to learn that Enonchong’s arrest was specifically requested by the Attorney General.

The arrest is said to be spurred by Enonchong’s recent criticisms on legal procedures concerning a case she’s a party to.

There’s been an uproar on Twitter over the illegal arrest with people speculating on what the motives could be.

The African Business Angels Network (ABAN), AfriLabs, and other coalitions have joined in the agitation, calling on the Cameroonian government to reel in its authoritarian moves and release Enonchong. 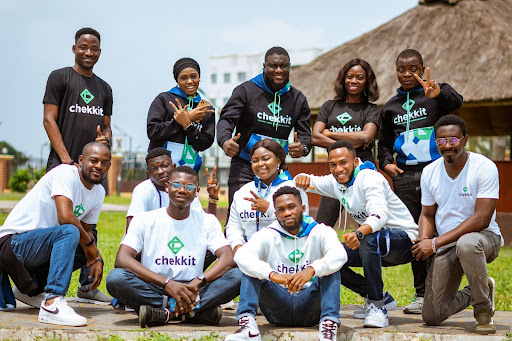