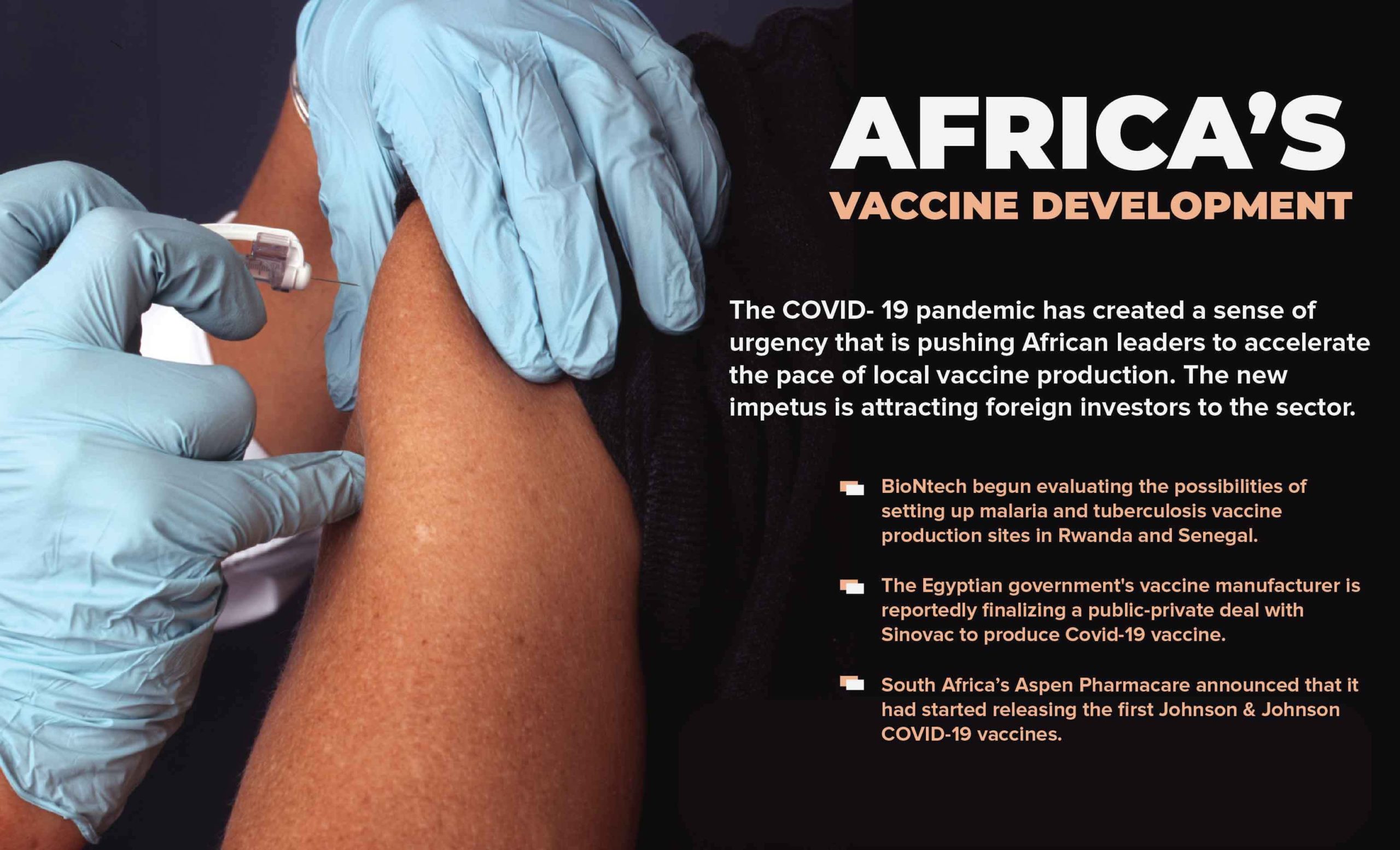 This article was contributed to TechCabal by Conrad Onyango, bird

Africa’s pandemic-induced bid to increase its share of vaccines manufactured in the continent has begun attracting foreign investors.

Already, German and Chinese investors have expressed interest in boosting local production capacity both in terms of funding projects and skills transfer in preparation for a vaccine “revolution”.

The COVID-19 vaccine maker said it has begun evaluating the possibilities of setting up malaria and tuberculosis vaccine production sites in Rwanda and Senegal.

“Our goal is the development of vaccines in Africa and the set-up of sustainable vaccine production capabilities to jointly improve the quality of medical care,” said Ugur Sahin, CEO and co-founder of BioNTech.

BioNtech said it was committed to investing in cutting-edge research and innovation to support vaccine development, the establishment of manufacturing facilities, and the transfer of manufacturing expertise to production sites on the continent.

Werner Hoyer, President of the European Investment Bank welcomed the new partnership saying the lender will “stand ready to provide technical experience and financial backing in the coming months.”

Chinese private sector investors have listed ‘speed up local manufacturing in the African medical industry alongside the unification of African standards’ among key topics for the Forum on China-Africa Cooperation (FOCAC 2021) meeting, scheduled for later in the year.

“Local manufacturing is vital to African economies, a challenge made especially clear with the supply restrictions that have arisen during the COVID19 pandemic,” according to the latest China-Africa Business Council Report, titled, “Market Power and Role of the Private Sector”.

While many African countries have attractive policies for the medical industry, the report says that policies vary greatly among African countries and there is a lack of mutual recognition, which reduces the willingness of foreign-funded enterprises to invest in
Africa on a large scale.

“Establishing the AU and African regional organizations, the African Medicines Agency (AMA) and the AU technical standards certification organization as quickly as possible will be very useful and will complement renewed efforts from the Chinese side to encourage investment in local manufacturing of pharmaceutical and medical products, rather than export,” says the report.

BioNtech focus on Malaria and TB vaccines bodes well with Partnerships for African Vaccine Manufacturing (PAVM) target of prioritising endemic and outbreak-prone diseases including HIV/Aids that accounts for high number of deaths in the continent to increase Africa’s manufacturing from current 1 percent to 60 percent by 2040.

“The ambition is to leverage new technology in support of a sustainable manufacturing industry on the continent. This initiative joins others across the continent in pushing forward this vision,” said John Nkengasong, Director of Africa CDC.

In 2017, African Union heads of state and government committed to end AIDS, TB and malaria by 2030.

On the cards under this partnership was a financial arrangement that would see a South African business – Aspen Pharmacare – ramp up its manufacturing capacity and produce more than 500 million doses of the Johnson & Johnson vaccine by the end of 2022.

A research paper published by the Tony Blaire Institute for Global Change in April shows there are seven other African countries with various capacities, ranging from manufacturing, to fill and finish (the process of filling vials with vaccine and finishing the process of packaging the medicine for distribution), to distribution.

Senegal exports a WHO pre-qualified vaccine, through the Institut Pasteur de Dakar that produces small quantities of yellow fever vaccines while Morocco, Egypt, Tunisia and Ethiopia – are among countries positioned to provide fill and finish.

Nigeria is investing heavily in research and development with plans to leverage a Public-Private Partnership (PPP) model to manufacture, among others, COVID-19 and HIV, yellow fever, measles, hepatitis B vaccines.

Vaccine manufacturing in Africa, a report from UK Aid, also shows Algeria has the capacity to do substance manufacturing for rabies vaccine and distribute other imported vaccines.

South Africa, which has historically led much of Africa’s vaccine production through its public-private partnership with Biovac, has over the last five years invested in modernizing facilities and upskilling staff to ramp up manufacturing capacity, says
the paper.

The supplies would be “the first COVID-19 vaccines to be produced on the African continent, by an African producer for South African and African patients. Supplies will also be made to the European Union and other offshore markets,” the South African multinational said on its website.