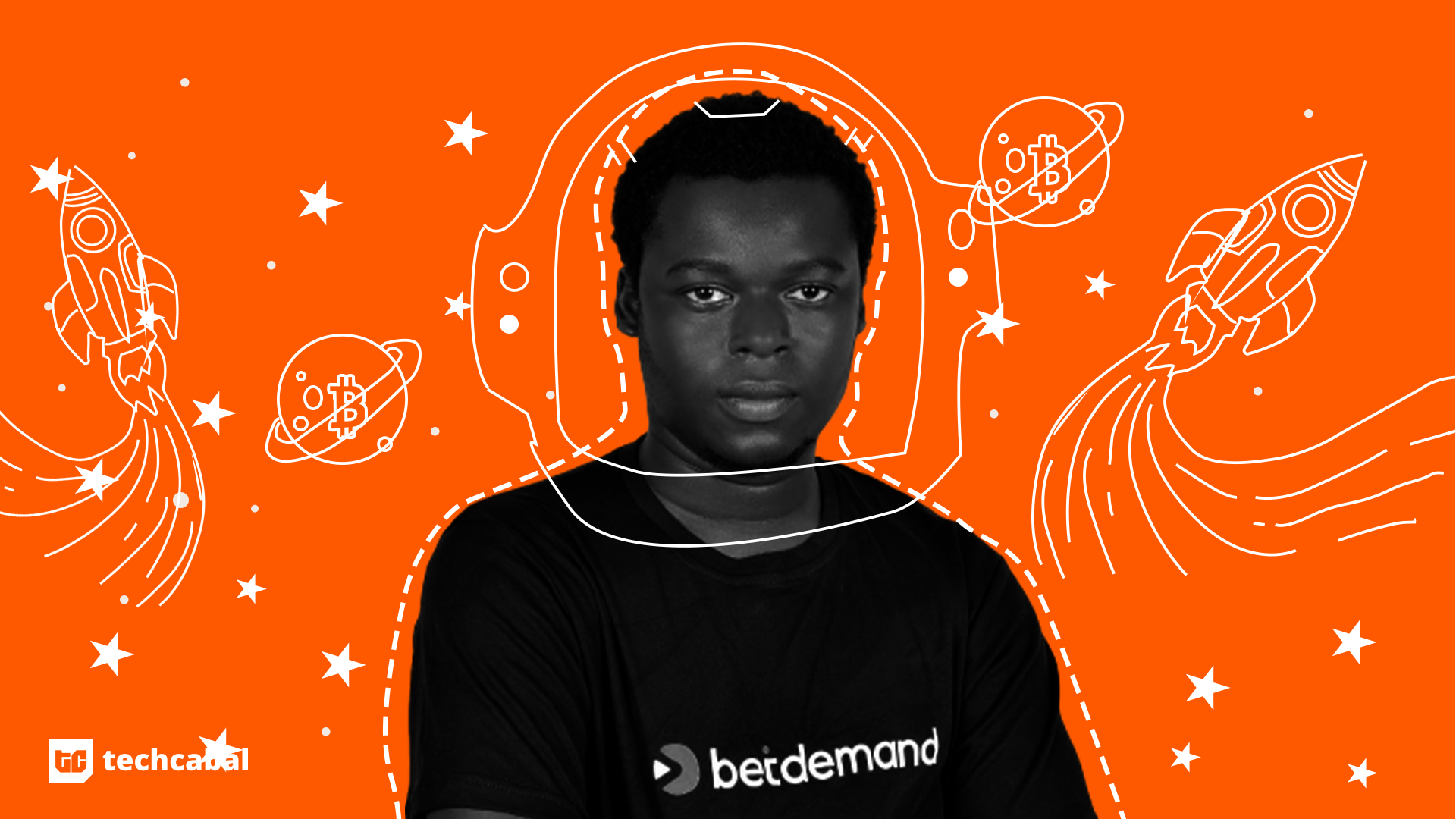 Akinyemi Akindele, 27, studied computer science at the University of Ibadan, where he trained as a Web2 software developer.

However, his journey into the blockchain world did not start until he got an internship in 2015 at Interswitch, one of Africa’s earliest unicorns. At Interswitch, he worked in the research and development team where he got the opportunity to test out interesting emerging technologies like AI and blockchain—technologies that the business was not focusing on at that point.

Akindele was neck-deep into the blockchain and soon realised its power. “People were talking about the future of finance and I got to work on it early on,” Akindele said. As a Nigerian experiencing the rapid decline in value of the naira, Akindele resonated with bitcoin’s promise to provide a store of value not tied to the traditional financial system or government’s whims.

He was a man of varied interest, his final year paper at the university was based on artificial intelligence (AI)—with a focus on artificial neural networks. Upon graduating from university, he returned to work at Interswitch and started learning how to develop blockchain solutions. Eventually, he got to build a blockchain supply chain solution with his team, the first of its kind in the country, he said. The blockchain solution made the loaning and contract awarding process involving Dangote Plc bidding suppliers and banks seamless.

Akindele attended hackathons, and ethereum meetups organised by Consensys in Lagos, where he had to build smart contracts on ethereum. He won some—worth 1 to 3 million naira—and that was pivotal to his career growth. He admitted that he won a lot of those hackathons because he already had a lot of experience in building ethereum solutions at his workplace, Interswitch.

In one of the hackathons, he met an American founder, Daniel Block, who was building an NFT marketplace for properties, as far back as 2018. He was on a mission to tokenise real estate properties in Africa, had digitised land records in Ghana, and had his sights set on Nigeria.

Akindele joined Block’s company, SESO Global, as its first blockchain engineer, where he helped build an NFT marketplace. There, he spent a year building their enterprise ethereum, and wrote smart contract code to power those NFTs—years before the NFT buzz of 2021.

It was in one of those hackathons, where he had been an outstanding competitor, that Akindele met Yele Bademosi, Nestcoin co-founder, who was then director of Binance Labs, the venture arm of global crypto exchange, Binance. Yele was a judge in those hackathons, and he kept in touch with Akindele because of his outstanding performance. So, when Yele needed a team to start a project internally inside Binance, he reached out to Akindele.

Akindele joined Binance—where he was earning about $48,000 per year—as a blockchain engineer, and with a team of backend, mobile, and blockchain engineers, helped build a cryptocurrency exchange right from the scratch. “It was interesting because we got to learn a lot of new things. For example, I did a lot of encryption, wallet generation, and signing off; and I got to know a lot of different coins listed on the exchange.”

Akindele recalled that the project commenced when Facebook announced Libra, a cryptocurrency, wallet and an exchange, all in one. “It looked like the hottest thing ever!” Akindele further explained that Binance was worried Facebook might take over developing countries due to the proposed Libra’s reach, so Binance started a competing project, which gave birth to Bundle Africa.

At the time, Bundle Africa ran as a startup inside Binance and was also a remote-first company. Within 16 months, Bundle Africa got 650,000 users, majorly by word of mouth, community marketing, and a small marketing budget. The way its adoption skyrocketed made Akindele realise the huge potential crypto products had.

After two years at Binance, Akindele joined EMTECH, a US blockchain company that builds digital currency for central banks across the world. At EMTECH—where he was earning about $84, 000 per year—he helped build tokens, did DevOps work and helped in shipping projects.  EMTECH had created the world’s first CBDC for the Bahamas and was the go-to fintech company for central banks looking to create digital currencies.

Another idea that endeared Akindele to blockchain engineering was that the blockchain was a melting point for a lot of things. “To be very good at blockchain you have to know things beyond your engineering skills, like finance, and compliance and regulations. You have to think about these things every time you write a code or develop anything.”

Akindele believes that anyone who wants to transition into becoming a Web3 developer must believe that it is the future. “You have to convince yourself because no one is coming to convince you that ownership rights on non-fungible tokens (NFTs) will be big in the future.”

He further advised aspiring blockchain developers to learn how to build on a popular blockchain like ethereum, develop ethereum Decentralised applications (Dapps) and write Solidity code. “It is at this point you will realise that you have new powers because you would be able to write smart contracts, deploy them on a public blockchain and see people interacting with your blockchain.”

Akindele left EMTECH to found a startup, BetDemand, a decentralised finance (DeFi) sport betting platform where every player who lose their bets still get their initial staking.

The idea for BetDemand came to him while he studied game theory to understand why and how people play games and the economic models designed as part of those games. He discovered that economic incentives in the traditional sports betting model are harmful: a large number of people were losing money but couldn’t stop playing because they were already addicted to betting.

BetDemand eliminates the major problem people have with betting: losing their money. “Imagine telling a punter that even if he loses, he will get his money back after a week. That is an irresistible offer,” Akindele said. Players can only bet on football for now, with naira—for as low as  ₦50—and crypto.

BetDemand gathers all the money staked by players in a single pool, introducing a lock-up period of 1 week, where players do not receive their money back until after a week. During this lock-up period, BetDemand converts this pool of funds to USDT, a stablecoin, which would then be deposited in Venus protocol, a DeFi lending and borrowing platform. The pool of funds then earns 12% to 15% annual percentage yield (APY).

“Everybody gets their money back at the end of the day, whether you win or lose, and the interest we get during the lock-up period is shared with the winners.”

Akindele explained that they could have opted for other coins that would raise their yield to as high as 30% but, right now, they are sticking with USDT because stablecoins are non-volatile. They make less profit but it’s just enough to sustain the business.

In the last week of October, when BetDemand launched, the size of its pool of funds was $450; now it has increased to $26,000 per week.

BetDemand calculates winnings by multiplying the amount that players bet by total odds—a method not particularly different from how traditional betting companies calculate winnings. The day of the week in which one places a bet also affects winnings; it’s called the “day factor”. The difference with BetDemand, however, is that payouts are based on the interest the pool of funds yields over the week, so players can’t earn as high as they would with traditional betting. “But what we pay is enough to keep people coming back.”

Like the buzzy play-to-earn gaming Web3 companies, BetDemand is charting its course as a DeFi gaming company. And, although, yet to be announced, it has raised an angel round and is in the process of closing a pre-seed round.

Akindele, speaking about what Web3 will do for Africa, said, “Web3 will be very big for Africa, because when the internet was being built in Silicon Valley, a lot of Africans did not participate in that. But we have a chance to do so now. Every time new technologies are built, a lot of wealth is created around that period, and people involved in building these technologies, or those that exist at the time, benefit from it.”

He advised developers hoping to start their blockchain engineering journey to join communities on Discord, connect with people, and ask questions, especially from founders, to see why they make the decisions they make. He also advised them to contribute to open source blockchain projects and look for ways to solve the problems that exist today in Web2 with Web3.