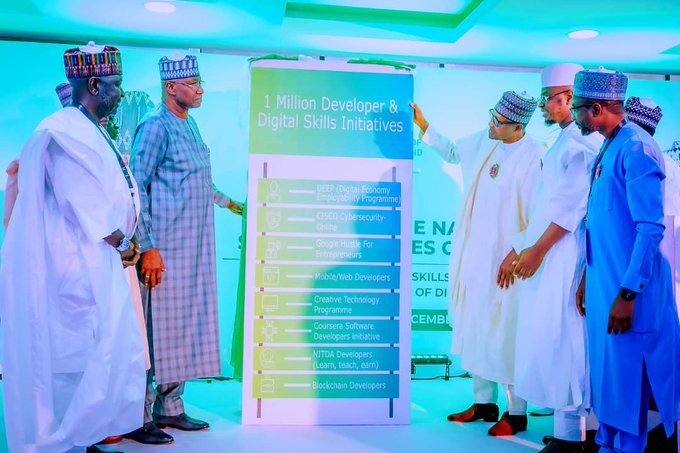 Isa Pantami, the minister of communication and digital economy, and Kashifu Inuwa Abdullahi, the current director-general of NITDA were absent at the public hearing of an amendment bill they are spearheading. Image Source: NITDA

Nigeria’s House of Assembly has postponed the public hearing on the proposed amendment of the establishing act of the country’s digital economy regulator, the National Information Technology Development Agency (NITDA), earlier scheduled for Friday, December 23.

The postponement is due to the absence of key stakeholders of the amendment bill.

The public hearing will now be held on a yet-to-be-decided date in January 2023.

Absent from the public hearing were the majority of the members of the Senate Committee on ICT and Cyber Security, the minister of communications and digital economy, Isa Ali Pantami, and the director-general of NITDA, Katie Inuwa Abdullahi.

The NITDA bill could have far-reaching consequences for internet freedom, media, social media companies, and all other technology companies operating in the country. The hearing was therefore supposed to allow tech stakeholders, media companies, civil society organisations, and the government to discuss the provisions of the increasingly controversial bill.

During the hearing on Friday, Uzoma Nkem-Abonta, a member of the house committee representing Ukwa federal constituency of Abia state, called for the public hearing to be postponed until  January, citing the absence of most of the members of the house committee, the NITDA boss, and the minister of communications. Nkem-Abonta also claimed to not have received a copy of the bill before the hearing. His position was supported by Idem Unyime, representing Ukanafun/Oruk Anam federal constituency of Akwa Ibom state, who had similar complaints.

The committee chairman, Yakubu Oseni, was forced to adjourn the hearing after present lawmakers remained unsatisfied with his arguments in favour of the continuation of the hearing. He had argued that there was no need for the NITDA boss to be present, that a copy of the bill was sent to all members of the House,  and a notice to the public hearing was sent to all members of the committee in the Senate and House of Representatives.

There have been increased efforts by the Nigerian government to regulate its growing digital economy and tech ecosystem. First came the Nigeria Startup Act (NSA), which was passed by President Muhammadu Buhari in October. The proposed amendment of the NITDA Act, many have said, may unroll the gains the NSA would offer Nigerian startups.

Davidson Oturu, a partner at Aelex Legal, told TechCabal that the NITDA Bill is incompatible with the NSA. The proposed amendment intends to impose an annual levy worth 1% of profit before tax on Nigerian startups with annual turnovers of over ₦100 million ($240,000), and fine startups operating without licences up to ₦30 million. One of the major strong points the NSA provide is tax breaks.

Another problematic amendment is the removal of a clause that provides for the inclusion of six tech experts in the 11-person NITDA Governing Board. The chairmanship of this board is not also limited to individuals with tech experience; those with experience in other fields, including law, finance, engineering, and administration can fill the post.

A tech source close to the matter said that the proposed amendment will give NITDA too much power and create bottlenecks that might hinder the ability of Nigerian startups to create competitive technology.