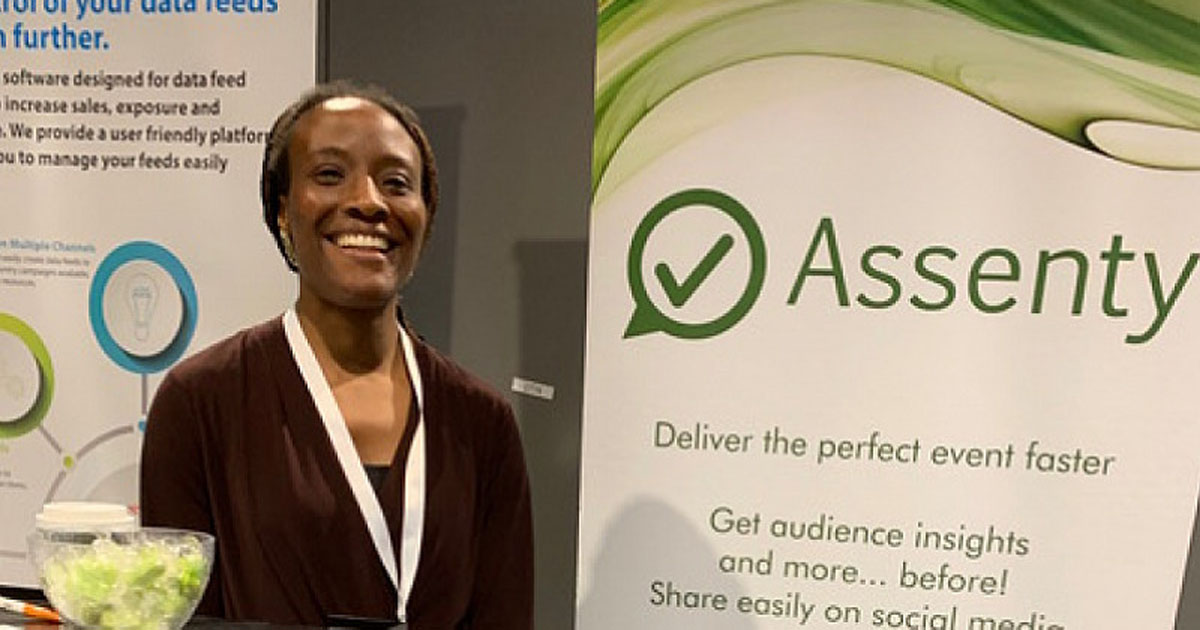 In 2016, Chi-chi Ekweozor—a social media marketer turned front-end developer and software engineer—decided to tackle the problem of getting questions from an audience up on a screen during a Q&A session. She ended up building Assenty, an interaction and live polling tool for events, be it in-person, virtual, or a hybrid in-between.

Assenty allows clients to use quick polls to build buzz and engagement before, during, and after events as well as the ability to run interactive Q&A at any time. For the audience, it enables them express their opinion anywhere a link can be shared—on WhatsApp, Slack, and more.

For the sixth episode of the “Building From Ground Up” event series held earlier this month, TechCabal sat with Ekweozor for a debrief on how she built and scaled Assenty as well as her experience with navigating challenges and more so, creating opportunities out of them.

Before starting Assenty, Ekweozor, a graduate of electronic and communication engineering at York University, worked on different projects as a software developer. Her interest in music then led her to start a live podcast with the idea of getting companies to sponsor the content being created for emerging artists in Manchester. But that didn’t go down well.

“We approached companies like T-Mobile back then, and they were like: ‘What’s a podcast when we have a MySpace account?’, meaning I was using technology they weren’t familiar with at the time,” Ekweozor recalls in the chat.

Ekweozor then decided to pivot the company into a social media marketing firm, called Real Fresh TV, teaching people how to use Facebook and Twitter to grow their businesses. “It was good business because, at that time, social media was becoming popular, but it was still pretty much new,” she says.

A few years later, during an international conference Ekweozor attended, the organisers asked audience members to text questions to one person’s number, and that at the end of the 3-day event, they would sit down and discuss the questions that were texted before replying.

“Despite taking so much time, that process or system worked, and you could tell from the questions where people were from. But, beyond that, there was not much context to the questions. So, from that, I thought there has to be a tech solution to this.”

In-between her project time, Ekweozor started thinking about ideas to address this challenge. “Any solution would have to work on a webpage and allow lots of people to interact with it on a social network without the webpage suffering from latency or any other issues that could affect the user experience. That’s how Assenty came to be,” she says.

Armed with learnings and connections gained while running Real Fresh for nearly 7 years between 2006 and 2012, Ekweozor built Assenty, with the product rolled out commercially in 2016.

Now, platforms like Zoom, whose popularity has skyrocketed since Covid-19 broke out, offer similar Q&A tools during events but Ekweozor claims Assenty was, prior to the pandemic, the only web-based platform that allowed event organisers to interact with the audience on social platforms while others required the people to download apps.

However, building the platform wasn’t without its own challenges. Reflecting on early mistakes, Ekweozor advises that first-time entrepreneurs shouldn’t embark on building a product unless they’ve identified a clear problem that the solution will solve.

“I’d say don’t build anything or write any code without engaging your audience, either in a focus group or some closed way that is not public, until you validate the problem,” she says.

On whether non-technical, early-stage founders need to get technical co-founders, Ekweozor notes that it depends on the type of product being built.

“There are certain types of problem-solving that don’t need a specific tech stack to be delivered,” she says. “So you don’t necessarily need to have someone with hard programming skills to build.”

But in situations where the product requires heavy tech components, it’s a massive advantage for founders who can code, hire developers, or an outsourced team at the early stage in order to validate the product.

For early-stage founders looking to build visibility for their products but with tight budgets, Ekweozor advises startups to focus on building connections with target users instead of spending heavily on marketing from the get-go.

“I think this is where your connection with your audience is really important,” she says. “Rather than marketing to get customers en masse, focus on a group of people I’d call the early adopters. Promote, engage, and build connections with them in a way that gets them talking about your product.”

Ekweozor also organises Manchester’s acclaimed #FemaleTechFounder—a monthly meet-up that started out as Assenty’s launch event and has since become one of the region’s foremost communities for supporting and nurturing female founders starting out in technology and business.