How a bootstrapped drone company is helping commercial and smallholder farmers 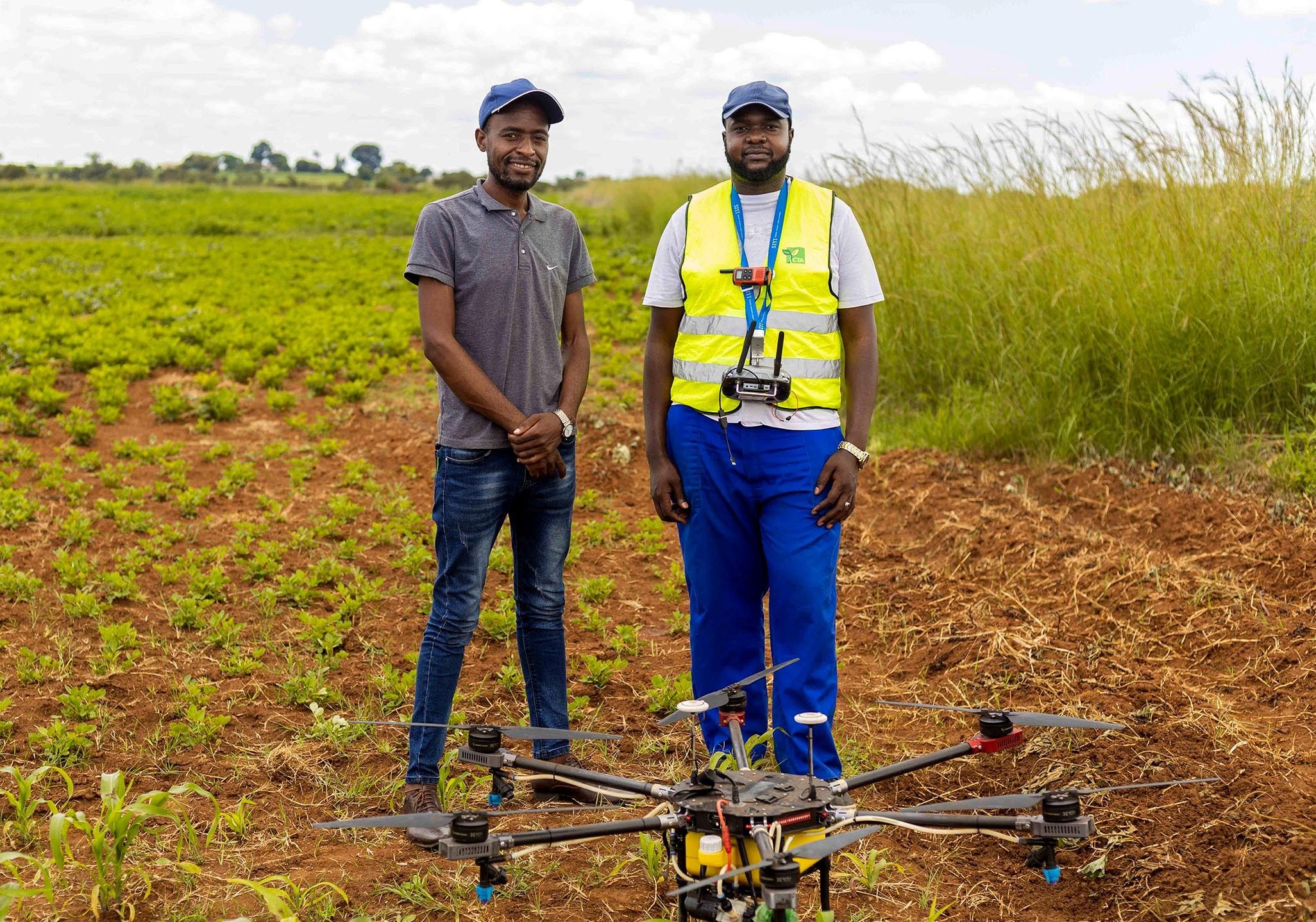 Right after their graduation, Anesu Mapisa and Emmanuel Marume realised that Agriculture was taking off but they didn’t want to pursue regular employment in the sector. So they started and bootstrapped a drone business that now provides both commercial and smallholder farmers with services that save them money.

In early 2018, Anesu Mapisa walked out of the gates of Zimbabwe’s Midlands State University armed with a Bachelor of Science in Agronomy… and a vision.

While his peers began looking for employment in the agricultural sector—one of the best paying industries in Zimbabwe—Mapisa aimed to approach the sector differently; he wanted to innovate and transform the lives of farmers, and not become another regular employee in the sector.

The more he thought about it, the more the idea—one he’d had since high school— consumed him. So Mapisa started talking with a classmate and friend, Marume,  about the idea of partnering as entrepreneurs. Marume quickly bought into the idea, and in 2018, they registered their company—Farm Buzz.

“Even though we did not have the capital to plunge into business, this was a dream come true; first, we needed to figure out how to help the farmers increase their yields,” Mapisa said.

Mapisa’s decision to focus on helping farmers grow their yield was informed by personal experiences. “I was raised on a farm in Macheke, so my parents were farming at a low level, and it was not producing much,” Mapisa explained.

“I wanted to bring solutions to subsistence farmers, including my parents, so they can efficiently produce a lot of food, which can sustain the family and the farm,” he added.

With the growing trend of young people in cities running farms in rural areas, the partners recognised that many were suffering losses and needed knowledge and hands-on people on their farms. These “telephone farmers” were spending a lot of time and money on manually spraying pesticides and herbicides, without getting the results they were paying for.

The 2 graduates turned to social media to teach about efficiency in farming and to seek clients.

“We worked on the company from scratch, without capital, without anything; we just started doing consultancy on Instagram and Facebook and grew from there,” Mapisa, now 22, said.

Most of their work was farm management, season budgeting, and consultancy services in the early days.

“We promote smart farming in Zimbabwe through best agronomy practices and agrotechnology.”

Fairly early on, the duo recognised the opportunity to employ drones to increase efficiency on the farms they were being employed to consult on, particularly when it came to weed control.

“We realised there was a need for a solution that would bring efficiency and precision in how our farmers weed. So we introduced drones as part of our services,” Mapisa explained.

But then, the lack of capital hurdle straddled the path of this young company. A basic crop-spraying drone costs about 10,000 US dollars.

Undeterred, they faced the challenge and opted to seek collaborations.  And their first engagement was with Alley Capital Group, a firm that had just entered the Zimbabwean market with drone technology.

After negotiations and consultations with Alley Capital group, a partnership was born and in 2019, Farm Buzz introduced drones to the market. Since then, they have provided pesticide coverage over 500 hectares, mostly on small scale farms.

“Many farmers are losing money, using other traditional methods like knapsack sprayers and boom sprayers, which are costly and inefficient,” Marume explained.

“They are losing a lot of chemicals through these methods. Knapsacks are heavy, and you need more workforce. For example, one person can spray one hectare a day, using a knapsack, but with a drone, one hectare can be done in 15 to 30 minutes,” he said.

Mapisa said the services they provide end up being cheaper, adding that while Farm Buzz charges the equivalent of $21 per hectare, commercial farmers in Zimbabwe,  who use boom sprayers, which are essentially tractors, pay some $75 per hectare.

Environmental benefits and more use cases

“When using drones, there is no fuel used compared to boom sprayers. With tractors, which pull the boom spray, there should be diesel. I believe this has a positive bearing on the environment; we need to reduce emissions in agriculture,” Mapisa explained.

The company also uses drones for farm mapping and scouting, helping farmers know the exact size of their fields for proper planning and resource use.

While there has been an increasing interest in the drone option, farmers did not immediately accept the technology, however. Traditional methods and experience stood in their way.

“My father, for instance, who has been farming for 20 years, uses the old methods such as knapsacks and boom sprayers because these have served him well over the years,”  Mapisa said.

So the 2 founders had to spend a lot of time educating farmers on the efficiency, time-saving, and cost- effectiveness of using drones.

Today, however, they are winning hearts and wallets, as farmers increasingly accept the new technology.

Among these is Louise Musungwa, who runs a farm in Nyabira, a settlement of agricultural plots on the Western outskirts of Harare, some 25 kilometers from the Central Business District.

Musungwa, a senior citizen, ventured into farming after retiring from nursing and has been at it for five years. She lives in Harare but often drives to Nyabira to oversee her projects.

“I was born on a farm; my father had a farm in Masvingo, but I never liked farming. After school, I went and did nursing, and I worked as a nurse, mostly abroad, until I retired and returned home,” she said.

“I decided to revisit my youth where I was forced to do farming. So, I started farming. I have been farming for 5 years, and because I didn’t have the land, I just rent from those who have unutilized land.”

After embracing drone technology to farm, she is seeing better returns from her 10 hectares. Previously, it would take her workers weeks to clear weed, forcing her to commute from the city daily.

“I was using people, and they were cheating me: most of them were just not serious, they were interested in money, not the yield and health of crops,” Musungwa recalled.

Musungwa also used a tractor to spray but was not happy with the outcome. “I like to be on the ground, ensuring that things are being done by the book, instructing where I can,” she explained.

“With drones, I can sacrifice a day and know that I am done with an activity,” Musungwa said.

Mapisa explained that besides those seeking to grow their yields, drone technology can also assist the aged, who are no longer physically able to satisfy the physical demands of commercial farming.

He says the company’s footprint across Zimbabwe could have been bigger, had it not been for the infrastructure limitations that sometimes stand in their way.

“Some of the technology we are bringing requires WiFi and here in Zimbabwe, data is costly; It is difficult to bring technology to some of these farms,” says Mapisa.

Beyond the drone business, Mapisa is confident that his company is helping to bring Zimbabwe closer to the food security the country is striving for.

“We improve the yield starting from planning, drafting the correct budget. We go to the production side; we follow all the good agronomic practices that a farmer must follow to produce high yields,” Mapisa explained, after a session with the drone at Musungwa’s farm.

“By doing that, we can increase 10 tonnes per hectare, using precise agronomic practices that our old farmers are not using,” he adds.

In 2020, Buzz Farm won the BancABC StartUp of the year award.

“We have been in numerous startup challenges; some we managed to be among finalists but are now winning. Our biggest award so far has been from BancABC,” said Mapisa.

“In Zambia, there are good climatic conditions, good soils, and good farms; so we will start with Zambia, then go upwards to the Democratic Republic of Congo,” Mapisa said confidently.

Mapisa said he believes Africa’s food security needs can be provided for if existing farmer capacity is increased. He challenged African countries and farmers to stay abreast with technological changes to remain globally competitive.

“I believe this is where the world is going; technology is there to assist us in our farming operations. In the first world, drones are a mainstay; in Africa, it gives us a chance to leapfrog and catch up with the world if we see a more widespread usage, adoption of this technology,” he said, predicting that in 10 years, drones would be a mainstay of farming, across the continent.