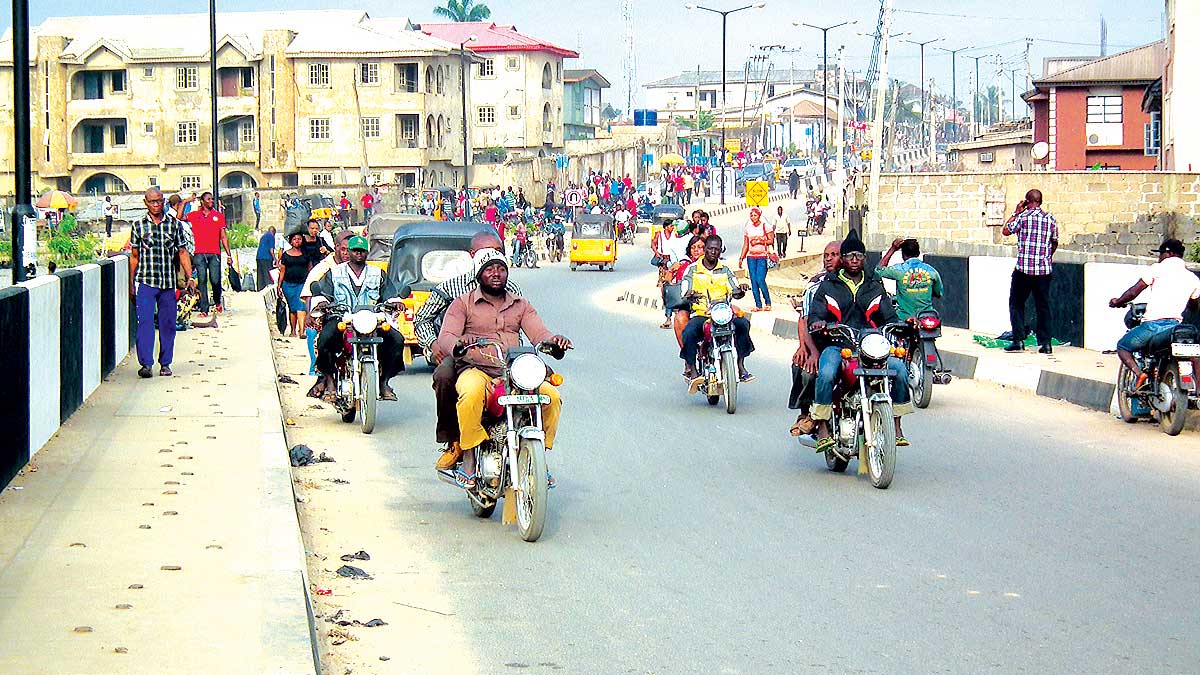 From humble roots in Cross Rivers State, Nigeria in the 70s (when they were first known as “Inaga”) to Edo State in the 80s when their popularity exploded, motorcycle taxis or Okada’s, as they are now known, have grown to become one of the primary modes of transportation in Nigeria today.

Okadas have become what they are for a number of factors including Nigeria’s historically high unemployment rates, decadent road infrastructure and the fact that these commercial motorcycles are relatively cheap to use compared to full size vehicles (or even tricycles). Access to commercial motorcycle service is also easy: you just have to stand on (almost) any street in most cities, flag one down, agree a price for your trip and pay at the end (or before if they don’t have change).

In recent times, states like Lagos, Delta and Edo have instituted partial bans on Okada activities but they are still very much part of Nigerian life. In fact, it’s not uncommon for people in Lagos to alight from other commercial/personal vehicles just to get an Okada to their destination [on time].

A Short History of Ride Hailing In Nigeria

Ride-hailing did not hit Nigeria until 2013 when Rocket Internet-backed brazil-based EasyTaxi launched in Lagos. The following year, Uber launched in Lagos and by 2015, there was a slew of home-grown cab-hailing services in the market (Alpha1, AfroCab, OgaTaxi etc). Today, a lot of those startups are no longer active but the two most prominent ride-hailing services are Uber and Estonia-based Taxify (whose parent company just raised $175 million at a $1 billion valuation).

These services offer comfortable, air-conditioned car rides that are convenient to request and pay for. Unfortunately, they have been unable to scale beyond major urban centers (Uber is only operational in two Nigerian cities: Lagos and Abuja) due to various factors including smartphone penetration, expendable income of communities outside these urban centers and relative affordability of traditional taxi services in cities that are less densely populated.

This means that while ride-hailing does exist on an appreciable scale in Nigeria, mainstream reach is still far off. So what are the alternative means of getting from point A to B?

How We Move in Nigeria

Taking Okadas is perhaps the fastest and easiest way to get around in Nigeria. However, the experience is not unified (language problems, underage drivers, unavailability in certain areas etc) and can be quite dangerous (most bike drivers do not use helmets or wear protective gear). Motorcycles aren’t very comfortable too and regulation has not been friendly in recent times. For drivers, they are also relatively affordable and running costs are low.

Tricycles offer a very cheap option to road transport in Nigeria but they are typically limited to neighbourhoods and surrounding environs. Like with Okadas, the experience is not unified either and they aren’t the most comfortable way one can get around. They can be dangerous too. On the flip side, tricycles are much more expensive than motorcycles but just as relatively low-cost to maintain, according to Jamiu, a tricycle mechanic in Lagos’ Surulere neighbourhood.

Traditional taxis offer much better comfort, a more linear experience and better safety. However, they are much more expensive than okadas and tricycles and they are much less readily available as well (getting a taxi typically involves going to one of their ‘parks’). Cars (typically foreign used) are quite expensive in Nigeria these days and maintenance costs are just as high.

Commercial buses aren’t as expensive to commute in, compared to taxis, but they are often overcrowded which makes them less comfortable (Nigerian commercial bus drivers typically modify their vehicles to contain as many people as possible). Also, they typically have predetermined routes and the experience is not linear. These buses are also very expensive to purchase and maintain which results in buses that aren’t in the best condition.

Uber/Taxify offers the best levels of comfort but they are way more expensive than other forms of transportation and require some investment on the part of the user (smartphone, Internet bundles, bank accounts etc). Like buses, cars are also very expensive to purchase and maintain even though Uber and Taxify do not actually own any of the vehicles operating on their platform.

Though they may not be the most comfortable (or safe) means of getting around in Nigeria, the okada-on-demand model seems to have the best shot at disrupting transportation in Nigeria at massive scale. To be clear, this is not to say okada-on-demand is a glove-fits-hand solution for Nigeria’s transportation problem, but it has a good chance to do better than the other available options.

Max Go (launched June 2017) and Gokada (launched February 2018) are the only two startups exploring this space in Nigeria at the moment (if we missed any others do let us know). According to CNBC Africa, Max Go estimates that there are over 200,000 motorcycle taxis in Lagos alone so there is a market. Max Go themselves are already completing just under 3000 rides a day and they have employed 300 drivers so far, according to co-founder Chinedu Azodoh in an interview with CNBC Africa. And that’s just in Lagos, where Max Go doesn’t yet offer full coverage. At the time of writing, Gokada was yet to respond to our email for comment.

A brand new 200cc motorcycle (the kind allowed on major roads and used by on-demand bike hailing startups Max Go and Gokada) typically costs anywhere between ₦250K – ₦400K (compared to ₦500K – ₦800K for tricycles) depending on the brand and model. Manufacturers also offer discounts for bulk purchases which means they can be cheaper too. Accompanying gear like helmets, kneepads and other protective gear are quite affordable.

According to Demola, a motorcycle mechanic in Lagos, maintenance costs are also very low and motorcycles tend to have a life cycle of 6-15 years provided they are maintained properly. The service is considerably cheaper too – a trip from Yaba to Ilupeju costs around ₦400 compared to Uber/Taxify rides that have a base fare of ₦250 – ₦400, regardless of where you are headed.

Across Nigeria, people are familiar with Okadas and how they work. In high density areas with heavy traffic, they offer a faster means of getting around compared to buses or tricycles.

Because Okadas are used across Nigeria (and not just Lagos or Abuja), it means scalability is easier. Newbie okada-on-demand startup, Gokada, allows its drivers to bring their own bikes (provided they allow it be branded in Gokada’s colors) which means drivers across the country who own bikes that are 200cc and above in power can easily get on the platform.

Naturally, the okada-on-demand model also has its own shortfalls. Comfort isn’t great – you also have to worry about the weather, crashes can be fatal and in non-urban areas where transportation is not as expensive, it could be hard to make a case for it. There’s also the thing of it being an internet-based service that [currently] requires a smartphone and internet connection (this could be tackled by leveraging technology like USSD). However, those elements, in comparison to alternatives like Uber/Taxify, are less difficult to deal with. Okada-on-demand has great potential and it will be interesting to see where the innovators and entrepreneurs take it.

Update: I originally mentioned Mondo Ride among the ride-hailing startups that have operated and failed in Nigeria. That was a mistake – Mondo Ride has never been operational in Nigeria. I apologise.