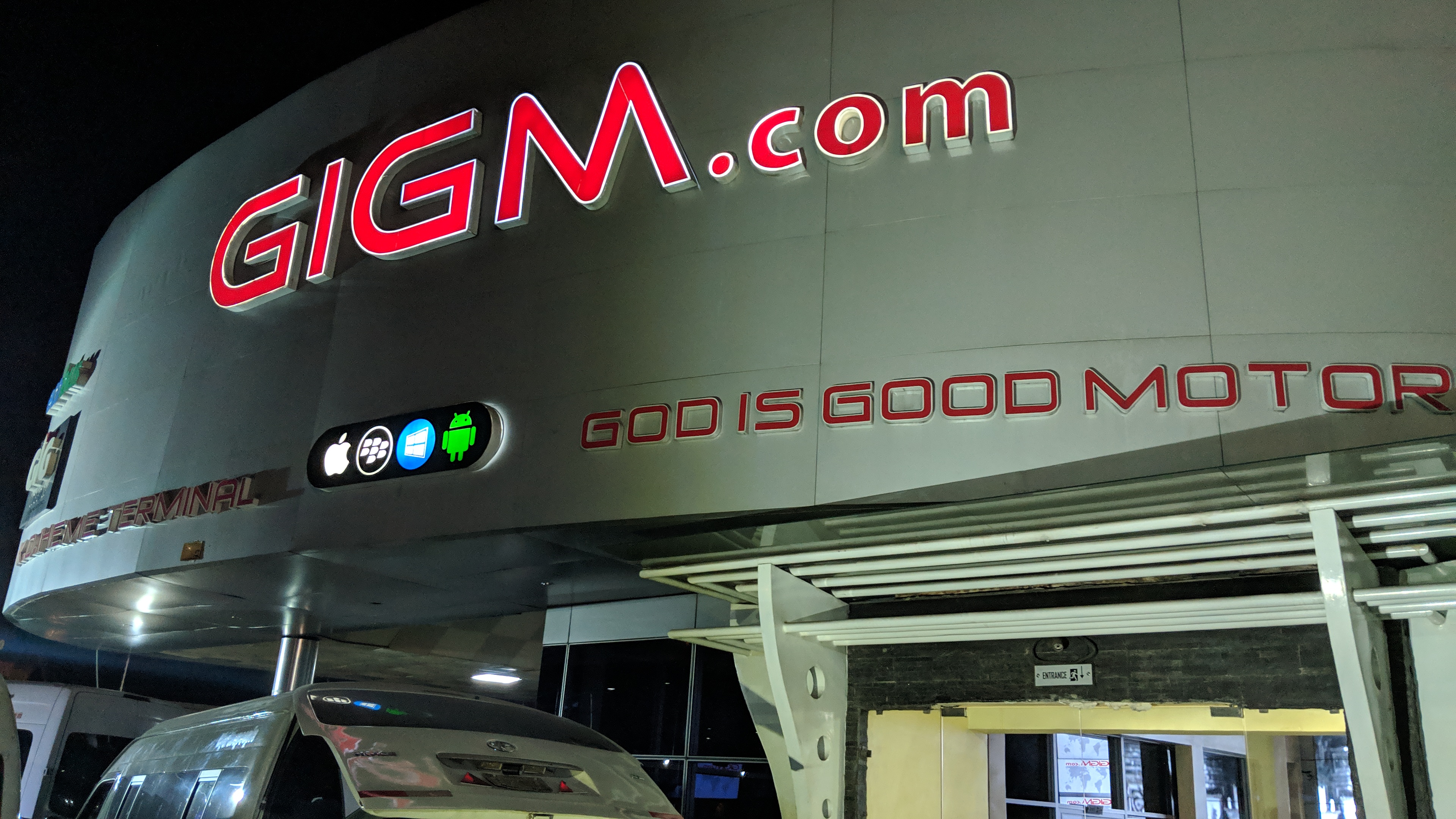 Back in 1997, “luxurious” buses were all the rave for interstate transport in Nigeria. People used these huge 59-seater vehicles to move goods, visit their hometowns and go on cross-country trips. Then Edwin Ajaere, a spare parts dealer, incorporated God Is Good Motors (GIGM), and launched the first medium-size bus transport fleet in Nigeria one year later in 1998 in Benin City, Edo State.

At the time, the leading road transport companies – ABC, Chisco and Young Shall Grow – all had a combination of luxury buses, for most longer distance journeys, and medium-sized buses for shorter journeys. GIGM was the first to use 14-seater buses for all trips. The company would grow to become Nigeria’s most technologically advanced road transport company with the first top-down transport management system in the country, a 600-bus fleet and over 2000 employees.

A Tragedy And A New Chapter

Unfortunately, in 2009, Edwin Ajaere was kidnapped and subsequently killed. His first son, Chidi Ajaere, just 21 at the time, had to return to Nigeria from Canada, where he was studying at Niagara College, to take over the business. Thus began a new chapter in GIGM’s journey to becoming one of Nigeria’s biggest road transport companies.

Off the bat, Chidi set off to completely rebuild the company from the offline, legacy style in which it was run and led a rebranding charge. The company logo and typeface were changed, staff were re-trained, GIGM-branded uniforms were introduced and the company’s entire fleet was fitted with air-conditioning systems. Before that, bus loading protocols and operational dynamics were rudimentary. Everything else was informal and inefficient, partly because the road transport industry in Nigeria is unregulated.

He invested heavily in hiring better skilled people. Measures that prevented “overloading” were introduced, focus was placed on internal discipline, weekly soft skills trainings for its drivers (or “captains”, as GIGM likes to call them) began and the company’s safety protocols were redesigned.

Between 2014 and 2016, GIGM developed an in-house end-to-end transport management solution, called GIG Mobility, to handle things like tracking, emergency response, finance, operations and basically every aspect of the business. According to GM Vuakpor Muoghere, the company couldn’t find anything that could address GIGM’s peculiarities off the shelf so they had to build their system in-house. In 2016, they launched the first version of their booking app – the first road transport company in Nigeria to do so.

2012 – Awarded “Most Outstanding and Fastest Growing Motor Company” for the year 2011 by the Nigerian Union of Journalists (NUJ); GIG Logistics is spun out as a separate business.

2017 – Booking app is redesigned and relaunched.

While GIGM may not have the most advanced technology systems in the world, its use of technology across its operations surpasses that of its competitors by a considerable margin. In doing this profile, GIGM only told us about GIG Mobility, its transport management system through which it manages various aspects of its operations. We didn’t see it or interact with it in any way. That said, GIGM is known among frequent travellers for keeping to time at least 80% of the time. Muoghere says they can track every vehicle on the fleet through GIG Mobility and as such can investigate unscheduled delays and act as needed, cutting down travel times and improving the overall efficiency of its fleet.

GIGM is a subsidiary of the GIG Group, which includes an oil and gas business, an energy business, a short distance bus service, a media business and a logistics company. Current chairman Chidi Ajaere is credited with diversifying beyond the transport business, which is the biggest business within the group.

Its mobile booking app has over 130,000 downloads across iOS and Android and a quick check on the Google Play Store shows it gets regular updates. In comparison, mobile apps for competitors ABC, Chisco and Peace Mass Transit, all have less than 4,000 downloads combined. In fact, ABC’s iOS app was last updated one year ago.

Also, GIGM terminals are equipped with systems that allow it offer a smoother, more efficient check-in experience for its customers. When a customer gets to the check-in counter at a GIGM terminal they can go to the online booking section, give the attendant a reference number, get a printout of their ticket and confirmation of their details, and proceed to board their bus. In comparison, its competitors still operate mostly manual processes at their terminals. At best, a user would be able to pay for a ticket using through PoS. For those that do offer web bookings, they only do so in certain terminals and even then it’s usually hit or miss.

GIGM is the subject of a barrage of taxes thanks to the lack of regulation in the Nigerian transport industry. According to Muoghere, local governments constantly send “demand notices” for seemingly mundane things like sanitation, signboards, external TV screens and so on. There are also informal cabals that demand informal taxes to allow GIGM operate in certain locations or ply certain routes. These cabals are also able to hold sway since there are no structures or regulation on how a transport business can/should operate, what the boundaries are or the parameters governing the ability of a business to move goods and people across the country.

Anyone with enough money can just buy two buses, slap logos on them, find a pickup location/terminal and “start” a road transport company without having to check in with any government authority or agency.

Muoghere also said GIGM has to get operating licenses from local governments where it operates pickup points. In Lagos, it has ten pickup locations, which translates to 10 operating license fees. Across Nigeria, it has 31 terminal locations and while the fees vary from state to state, paying multiple fees per location boils down to a ridiculous amount of money.

“We can tell our captains what to do in a finite set of situations but these things can happen in any number of ways. That’s a challenge that we cannot fix ourselves but we still have to deal with and doing so is not easy” – VuakporMuoghere, GM, GIGM.

Insecurity is one of GIGM’s biggest problems. Recently, one of its buses was involved in a kidnap incident. Though the company trains its drivers on safety measures in the event of these kinds of incidents, that’s not nearly enough. It does track vehicle locations, unscheduled stops, unauthorized routes and other information in real time to help it respond as quickly as possible to potential emergencies. It also has a unit dedicated to checking vehicles in the fleet at different stops along the route to ensure that vehicles in its fleet conform to the company’s standards. This unit is strategically placed along various routes to provide emergency assistance as well.

Another challenge is the terrible state of roads in Nigeria. They are so bad that Nigeria records one of the highest road accident numbers in the world with several hundred lives lost every year. “The roads are very bad and that causes the vehicles to wear faster, increasing maintenance costs, reducing fleet productivity and escalating operational costs,” said Muoghere. Per a 2012 estimate of the National Planning Commission, 87% of local government roads (or majority of the roads in the country since most roads are LG roads) are in poor condition, 78% of state government roads are also in poor condition and 40% of federal are also in similar conditions. These numbers do not include roads that are in need of maintenance and trunk roads that are yet to be tarred.

GIGM By The Digits

13 – The number of states in Nigeria GIGM operates in

130,000 – The number of times GIGM’s booking app has been downloaded

Through tragedy and an extremely difficult business environment, GIGM has managed to remain bullish on its mission to become Nigeria’s foremost road transport company by investing heavily in technology as a tool through which it can redefine the transport experience for its customers. It is this approach to business and a willingness to rely on, and invest heavily, in technology that has made it Nigeria’s most technologically advanced road transport company.