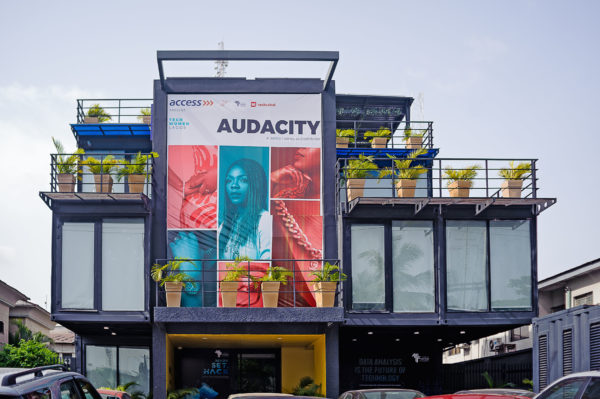 When we began executing in bits the many parts of the Tech Women Lagos portrait series and exhibition, we were hoping to celebrate women in the Lagos technology sector and by so doing, encourage young girls and women to aspire to careers in an industry that is still struggling to recruit and keep women in it.

The response to the portrait series and exhibition has traveled quite organically and beyond what we initially imagined.

Following the launch of the Tech Women Lagos portrait series on its dedicated website – www.techwomenlagos.com – on International Women’s Day, March 8, 2019, the AUDACITY exhibition presents the photos in a multi-sensory physical experience at the Africa Fintech Foundry on Victoria Island in Lagos.

The exhibition opened to the public on March 16, 2019 with the team from GirlLEAD Project, a coding bootcamp initiative for girls based in Edo State, Nigeria.

We're still out here at the Africa Fintech Foundry, welcoming everyone to come explore these stories of AUDACITY. #TechWomenLagos

According to Stephen Gabriel, a Software Developer/Medical Student and Head of Product Development at the GirlLEAD Project, the exhibition is not only a win for the project given its target demographic but also an inspiration for the students.

“We want them to see that people have done it and so they can.”

Damilola Marcus, one of the women profiled and who visited the exhibition on Saturday, says she is excited about the impact the exhibition would have on young girls who come to see it.

“Representation is very important and it does inspire interest.”

“It’s not patronising and I am genuinely interested in seeing the profiles of other women in the series.”

The highlights of the weekend were stories like the ones below from 10-year old Feyikemi Osho, Vivian Akanbi and Funmi.

Meet Feyikemi Osho, she is 10 and wants to be a programmer. She is at the AUDACITY exhibition venue. #TechWomenLagos #SheWhoDares pic.twitter.com/WMRSy2E9YW

Meet Vivian Akanbi (@vivianfele), she is a Business Analyst. She is inspired to see women who don't code in the #TechWomenLagos portrait series. She once didn't get an opportunity to work at a company she liked and interviewed at because she couldn't code. pic.twitter.com/giis7exA74

Funmi here works in marketing, but she wants to learn coding. She was inspired by @Themmytee's "from real estate to tech" story – https://t.co/lIl5elrZ4X#TechWomenLagos pic.twitter.com/c1j44OxWMd

Our goal is to have more stories like these at the end of this portrait series and exhibition event. We want to inspire as many young girls and women who come out to see the exhibition by showing them what women in tech look like and how they are excelling in their respective careers in the industry.

Watch the rest of the highlights of the opening weekend:

The exhibition is still on this weekend, March 23 and 24, 2019 at the Africa Fintech Foundry, 1216 Ibiyinka Olorunbe Close, Victoria Island, Lagos.

It’s the last weekend as well, so make sure you come out and see it.

We have put together a guide to help you have a richer exhibition experience.