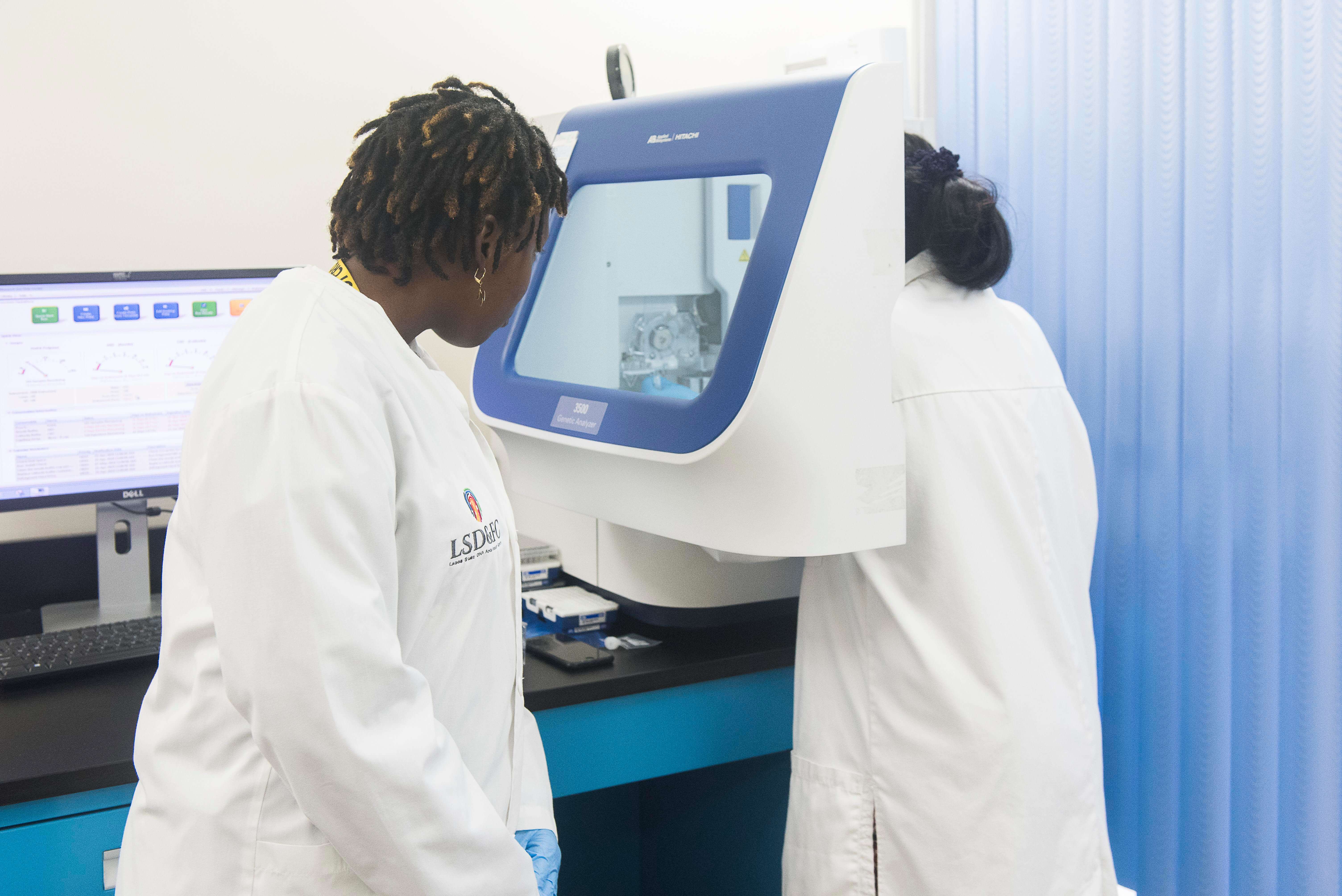 DNA profiling made its way into criminal investigations sometime in the late 1980s.

One popular early case was the OJ Simpson murder trial in 1994, which ended with an acquittal following the establishment of “reasonable doubt” concerning the validity of the DNA evidence put forward by the prosecution. The defendant’s blood samples that were analysed had allegedly been mishandled by lab scientists and technicians.

OJ Simpson’s case spotlights the importance of a DNA forensic laboratory, setup with all the proper mechanisms to ensure the reliability of the results of DNA analysis and to make it admissible in court.

The Lagos State DNA and Forensics Center (LSD&FC) was commissioned in 2017, and was hailed as the first “high-powered DNA forensic laboratory in Nigeria” with the mandate to conduct scientific investigation of crime in the state, using DNA analysis. Early this year, the centre was accredited by the American Association for Laboratory Accreditation (A2LA) for forensic DNA testing.

I visited the LSD&FC and spoke with Dr. Richard Somiari, the Center Director. 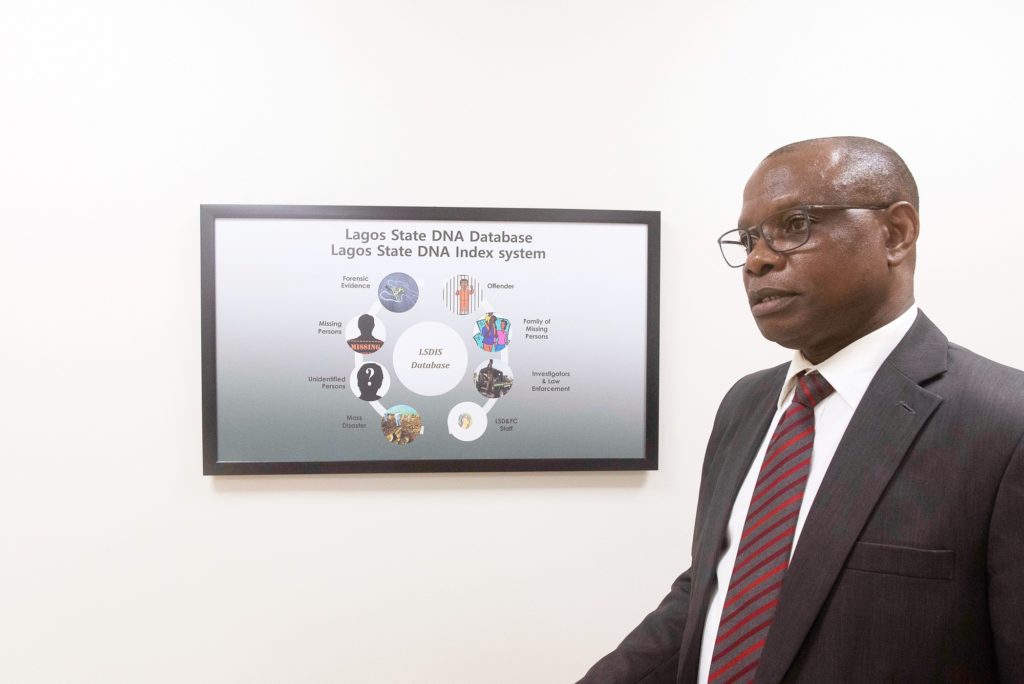 “We are very different from other laboratories that perform DNA tests in Nigeria because we are a crime laboratory and maintain very stringent standards. We must produce accurate, reliable and unbiased results that can be used in court all the time,” explained Dr. Somiari during a tour of the centre.

Security at the centre is tight, to preserve the integrity of the DNA collection, processing and analysis carried out on the premises. Everyone who enters the building is tracked from the point of entry until they leave, and both staff and visitors carry automated pass cards that grant different levels of access within the building.

He said the centre was first conceived as a joint project of the Ministry of Health, Ministry of Justice, and Ministry of Science of the Lagos State government. However, it became apparent that the needs of a DNA centre for each ministry would differ as a result of the processes. For example, the International Standards Organization (ISO) requirements for a forensic DNA centre (which is what the justice ministry required) is much different from one that would be set up for health purposes.

Dr. Somiari explained that a centre setup to profile DNA for the Ministry of Health may not have a need for such stringent security measures as necessary for the centre.

“To date, the centre has supported 85 forensic cases and 191 relationship cases. Support includes crime scene investigation and testing of evidentiary items recovered from crime scenes or submitted by police and other law enforcement agencies.”

The centre operates sophisticated equipment that must be calibrated and serviced.

Finding certified technicians to work on the core equipment and ensuring that standards were met proved a challenge for the centre. Some of these technicians had to be brought in from outside the country.

Also, being the first DNA forensic lab in Nigeria, there were no experienced analysts on the ground in the country. “There are many people with the requisite education from foreign and Nigerian universities but zero practical experience, because they had no opportunity to work in a DNA forensic crime laboratory.”

“You must work in a crime lab for many years under supervision to gain experience before becoming a forensic analyst. To be able to start offering services immediately we had to bring in technical leaders with over 20 years’ experience from the USA to start working on real cases, and to use the cases to train new people hired.”

Then, the matter of processing crime scenes and collecting evidence brought in by people with no training or experience means, according to Dr. Somiari, that DNA samples may be compromised by improper handling or documentation of collected samples or contamination when DNA from one source gets mixed with DNA relevant to another case.

The temporary fix has been to send out the laboratory’s scientists to help with collecting and processing evidence. Dr Somiari said they will eventually set up a dedicated crime scene unit made up of individuals with adequate knowledge and experience in collecting and processing samples to assist law enforcement agencies and reduce cases of compromised or contaminated evidence.

There are also plans underway to expand the centre beyond DNA forensics and become a full forensic laboratory that can analyse most materials recovered from any crime scene. “We have started the establishment of two more disciplines–toxicology and chemistry. Toxicology will allow the center to test body fluids for the presence of alcohol, drugs, chemicals and controlled substances. The chemistry section will allow the center to test suspicious substances recovered from suspects or found at crime scenes,” says Dr. Somiari as he showed the parts of the centre under construction that will house these new sections. This would pave the way for improved crime investigation in Nigeria that relies on scientific methods for evidence.

In response to a question on whether the centre would not eventually be affected by the inefficiency of government owned agencies in Nigeria, Dr. Somiari said that, “Although the center is established under the Lagos State Ministry of Justice, we have put in place an operational and organizational structure that gives it independence to operate in an impartial manner, and without the type of management that exists in typical government agencies.”

“It is expected that the model we have established will be sustained perpetually. That is, a private company will always take care of the management and operational aspects while the government, through the ministry of justice and a public safety advisory board will provide oversight. This will insulate the center from excessive government bureaucracies and mitigate the inefficiencies that exist in typical government agencies.”