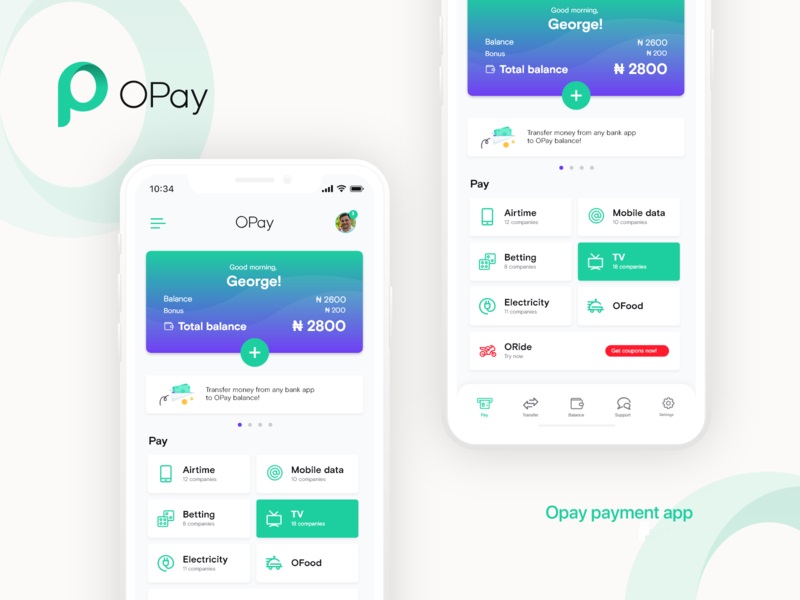 Beginning Wednesday, OPay, the Nigerian fintech platform, has increased its transaction fees for bank transfers. Previously, the app charged N10 when users made transactions from their OPay wallets to regular bank accounts. This fee will no longer apply, instead, the app will now charge N45 for the first transaction a user makes in a day. Subsequent transactions will incur a flat 1% processing fee.

For example, if an OPay user wants to send N100,000 from the app to a regular bank, instead of paying N10 as the transaction fee, the user will now pay N1000 (1%) as processing fee. But if this is the first transaction that the user is making that day, they would pay N45 as transaction fee.

Interestingly, the new rates are actually a revision. On Tuesday, the company had originally raised the charge to 2% and a minimum rate of N15 per transaction. In simpler terms, users would have paid 2% transaction fees for any transfers to banks.

But after negative reactions from OPay users the company was forced to reconsider the rate, setting it at 1% and a minimum of N45 per transaction.

OPay is not the first fintech to increase transaction charges in the last few months. Carbon did the reverse in August when it introduced charges for inbound transactions. The company announced a 1% transaction fee for debit card transfers to Carbon Wallets. It used to be free. But Carbon, at the time, said the zero-fee approach was no longer sustainable as more people used its Wallet feature. However, it continues to support a flat N10 charge for transfers from Wallets.

“This particular service came at a significant cost to us as we pay fees to your debit card issuer and payment processors for every card top-up,” the company wrote.

But unlike Carbon, OPay’s decision to increase transaction fees comes as a shock to its users who are spoiled with discounts. For one thing, users were not informed before the change was made. Customers found out about the original 2% charge on their own over the last two days when they tried to make transfers.

The company has now changed its rates twice in just two days and the changes were applied immediately. This is quite disruptive for customers, but it shows the level of flexibility fintech startups have.

Beyond the shock, the rate also seems odd. In Nigeria, sending money from one bank to another bank incurs N52.5 for every transaction. OPay’s N10 transaction fee was the main reason many people opt to use it for funds transfer. But now, that advantage is gone.

With the introduction of the 1% fee, it is now more expensive to make funds transfer from OPay than doing so with regular banking apps.

This could impact not just bank transfers but how people use the app’s other services, especially OWealth, its investment product. For as little as N10,000, OWealth invests in relatively risk-free products like treasury bills and mutual funds and promises OPay users 10% interest annually.

But depending on how much a user invests, the new OPay transaction charge means they could lose part or all of their returns when they try to transfer the money out of the app when maturity is due.

That’s a scary prospect for many users, and some have already started facing this challenge. In a tweet that predates the announcement of the new charges, one OPay user claimed he incurred N18,000 withdrawal charges to when he tried to transfer N900,000 funds he invested in OWealth. According to him, he was expecting “6k to 7k interest a Month

So why has OPay decided to increase its transaction charges?

In an official response, the company did not say exactly why it increased the transaction fee. But it is hoping that the move will lead to more financial activity within the OPay ecosystem. “Peer-to-peer transactions do not attract any fees within the OPay app,” Iniabasi Akpan, OPay’s Country Manager told TechCabal in an emailed statement.

“Evidently, with the new policy, users are encouraged to do more transfers and payments within the app,” he added.

Meanwhile, the company said “OWealth users should not be affected” by the new charges as it is developing its technology to “accommodate this change.”

Akpan said his company is working on a “plan to resolve any issue affecting OWealth users.”

Asked if this could mean an end to the many bonuses and subsidies that are associated with OPay and its verticals, Akpan said: “We are rest assured business will continue as usual.”

Correction: An earlier version of this article stated that Carbon introduced the 1% transaction fee for transfers from the Wallet to regular banks. The fee is for funding Wallets from regular banks.