My Life In Tech: A history on bike hailing, hard lessons and growing from Chinedu Azodoh 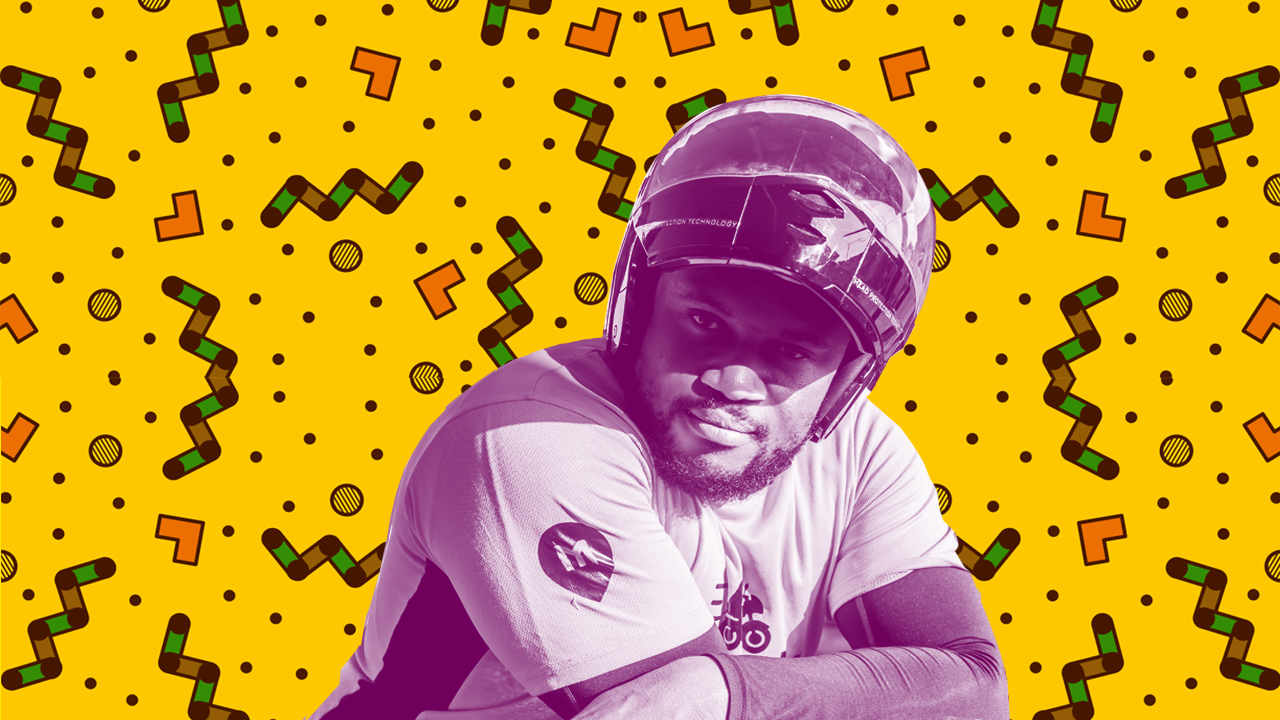 At over six feet, Chinedu Azodoh is towering adjacent a ‘TEDxYaba’ signage. He is the last speaker at the 2018 independently organised TED event in Lagos’ foremost technology cluster. A few seconds after he takes the stage, he has drawn out the audience’s lethargy after a full day of talks, some clearly unrehearsed and ironically uninspiring. But it is not just his ebullient personality that seemingly fills the large conference hall in the next half hour. His talk, Power of Human Connection – Struggle Pornography, curates personal stories of loss and family; the many phases of his journey as an entrepreneur; his genuineness when he describes picking interest in American football, a sport he once considered stupid and finally joining an actual team; and his 5-take home pointers for not falling prey to what he termed the ‘struggle pornography’, echoes across the hall and ends the conference on an aspirational high.

Azodoh leads growth efforts at Nigeria’s first motorbike hailing startup. In 2015, when Metro Africa Xpress was founded alongside co-founder and Chief Executive Officer Adetayo Bamiduro both of whom met at the Massachusetts Institute of Technology, no one was ordering bike rides via a phone app in Nigeria’s densely populated megacity. His job was an arduous one.

Three years prior to MAX’s launch, the Lagos state government had banned commercial motorcycles and motorcycles with less than 200cc (cylinder capacity) from major highways and more than 500 road networks across the state as a security measure. At the time, it was not unusual to hear of get-away okadas from robbery scenes or kidnappings facilitated by okadas whose riders the government could not trace. Many were doing business with fake plate numbers.

“These fake plate numbers, they sell it at 500 naira. We know because we accidentally bought fake plate numbers and we got arrested and learnt our lesson,” he says, the aftermath of a bad business deal with a third-party contractor.

But what this law implied was that thousands of commercial motorcyclists were rendered unemployed and left to search for alternative inner-city routes or a new means of livelihood. On the flip side, riding in an okada in Lagos was a dangerously extreme sport. It seemed the motorcyclists had spare lives waiting at the end of the day with the way they maneuvered Lagos’ deplorable road infrastructure without safety helmets and with utter disregard for traffic laws. In 2012, the Lagos State Traffic Management Authority (LASTMA) said 442 okada accidents were reported on a daily basis in Lagos.

“The solution to that was not banning. At least in 2012. It still isn’t banning. The solution to that problem was regulating and formalising and that is the position that we came from,” Azodoh says. MAX started out as a logistics service (which still comprises 30% of the company’s businesses). In those early days, there was little to no framework that could guide MAX’s operations but which could potentially hamper it. The bikes which they used for deliveries, although 200cc motorcycles, did not have the government-recommended delivery boxes attached to them.

“We spent a lot of time talking to people. I remember we used to spend 2-3 days every week from October 2016 till March 2017 going from one office to the other,” Azodoh recalls, offices in Alausa where Lagos’ administrative heart beats.

“When people talk about unions, they say unions collect taxes for the government. They don’t. The unions charge drivers money for working on the road as members of their unions. The money is not voluntary. The unions have gotten the drivers to a point where they just pay because if they don’t, they can’t operate.

“It’s kind of how the Mafia works, how the mob worked in Chicago in the 50s’ where you paid protection money so you don’t get beaten up. It’s a racket.”

MAX sought out tackling these issues from both the consumer and rider sides. With its MAX Academy, MAX continues to train their riders, Champions, to obey traffic rules, drive carefully and ensure the safety of themselves and their customers, an endeavour that is yielding positive feedback. With its internal licensing programme, the issue of vague or unknown identities no longer hold.

“We require them to get government licensing, of course,” Azodoh adds, and using the app, rider whereabouts can be tracked real-time in addition to a database of family, behavioural and residential records.

“Part of what we are going to be doing next in terms of identity tracking is to have them register with the Lagos State Residents Registration Agency (LASRRA),” he adds.

Most importantly, the company’s financing model has been structured to be mutually beneficial to both the company and the riders whom Azodoh says they are keen on liberating economically.

“A lot of our riders, within 3 months of joining us, they are making enough money to be able to make the next stage of their lives financially.

“So they are moving from poverty to middle class,” he says, a feat that would ordinarily be unachievable with the modus operandi of commercial motorcyclists a large percentage of whom do not own the okadas with which they do business daily.

“So what happens is that someone has a fleet of 30-60 bikes and rents to riders. Sometimes you have three riders sharing the same bike; one person drives in the morning, one in the afternoon, one in the evening or night.”

Another channel for temporary ownership is through a hire-purchase scheme but in the way that these things tend to go, the bike owners often withdraw the motorcycles just before a rider is set to take ownership of it and the cycle continues. The prices of the recommended 200cc motorcycles can also be prohibitive for people who earn between US$5 to US$10 daily after informal taxes and payments are deducted. Azodoh says in MAX’s earlier days, they had rolled out with Chinese bikes which they found quickly became creaky in the course of a few months. Each of them had cost roughly US$830.

“The banks won’t give loans and when the microfinance banks do, they lend at 7-10% monthly interest. Those are ungodly prices,” says Azodoh.

When the company switched to its current fleet which cost about US$1,700 each, they had to find a way to cover the risks in capital expenditure and lending costs.

“So we built a package for riders that was going to take care of these things and they paid only 40% interests instead of 200%” which was as high as they had to pay informal lenders or banks cumulatively.

“We’ve gone from a delivery company promising fast delivery to a financial technology business that builds technology and financial infrastructure to empower mobility in Africa and we do this by working with institutions to raise debt financing for riders, we provide health insurance, death and life insurance, passenger liability insurance for accident cases (T&Cs apply). We’ve almost become a digital financial institution for riders providing these full-fledged services for an underserved demography to help them better their economic prospects,” Azodoh says although he agrees there’s more to be done long-term to help MAX’s 1,250 riders become more financially stable and able to develop their lives and that of their families more roundly.

Since MAX, more okada hailing services  have launched in Lagos backed by heavyweight investments in the space in the past four years. Earlier this year, MAX closed a US$7 million funding round bringing their total amount of funding raised since 2015 to US$9 million. A month prior to this announcement, Gokada announced a US$5.3 million Series A raise. In the same month, Opera’s okada hailing service ORide launched with a US$40 million investment at its disposal.

“I love competition,” Azodoh says with a stress on the word love. He chuckles when he describes how he finds out a new service has just launched in Lagos, Nigeria’s overcrowded city which has become a viable ground for two-wheelers like MAX.

Azodoh recalls one of the company’s investors calling and raising tensions about another newly launched service and the stiffening competition growing in the sector.

“And the first day you see it, for like a month, you’re like, shit, they’re going to ruin us.”

“And what you realise very quickly is that they can’t really. Businesses fail because of internal factors not external factors” as long as there is a viable product or service being sold. From every new entrant into the market however, Azodoh says there’s been something to learn. As a result of the regulatory grey areas, they refused to brand as ‘okada’ and so when Gokada came into the market, customers had a hard time differentiating both services. But from Gokada, MAX started paying attention to marketing and branding. OPay came with a lot of money and freebies. Backed by Opera, he says there was some slight worry “because they came in with all this money” and quickly built a customer base by offering the lowest possible prices you could find in the market.

“Once you bind your business to who is the cheapest in the market, guess what happens, it will erode all value. And when you erode all value, competition becomes a bad thing.

Azodoh stresses that MAX isn’t part of an ongoing ‘bike war’, the prevalent manner in which growing competition in the sector is now being described.

“I hear a lot of stories about okada wars and I think it is a lot of sensationalism because in practice, maybe two companies are fighting this okada war.”

He says he expects more companies will continue to come into the sector in the coming years.

MAX introduced a tricycle (keke) hailing service sometime in August. Azodoh says they now have a “couple hundred” operating across Lagos with at least three female drivers, which is exciting for the company.

“It’s a different business so we are learning the complexities of the business.”

Back in October when we meet, Azodoh is unsure about announcing its electric motorbike launch just yet. But the company has since unveiled its MAX e Series 1 at the Lagos International Trade Fair. The EV  was locally built from deconstructing a fuel-powered bike. Azodoh says MAX will build out 20-30 more units before scaling manufacturing in a soon-to-be-announced global partnership that will include supporting infrastructure.

There are a number of relationships Azodoh holds dear and which has contributed over the years to the success of MAX and his personal growth. And they’ve come from a diverse number of places including his American football team where he first met Bertrand Njoya who is now the company’s Chief Financial Officer. Participating in the Techstars New York City Accelerator programme after being denied entry into the Chicago programme has also proved immensely beneficial to the organisation. Himself and Bamiduro had scraped funds together to travel on short notice from Boston to Chicago for the selection interview.

“Somebody there saw us and liked us so much told somebody in the Techstars New York program about us and they reached out to us.” Participation in the programme had ripple effects including participation in TechCrunch London and US$1 million investments.

“Techstars was amazing for us.”

One of Azodoh’s 5-point takeaways at the TEDxYaba event the year before was to strive for balance as an entrepreneur or corporate or student. “Balance is evolving for me,” he says when I ask how much of it he’s been able to have with all the facets of his life.