Did you miss the TC Edtech Townhall? Here’s what went down 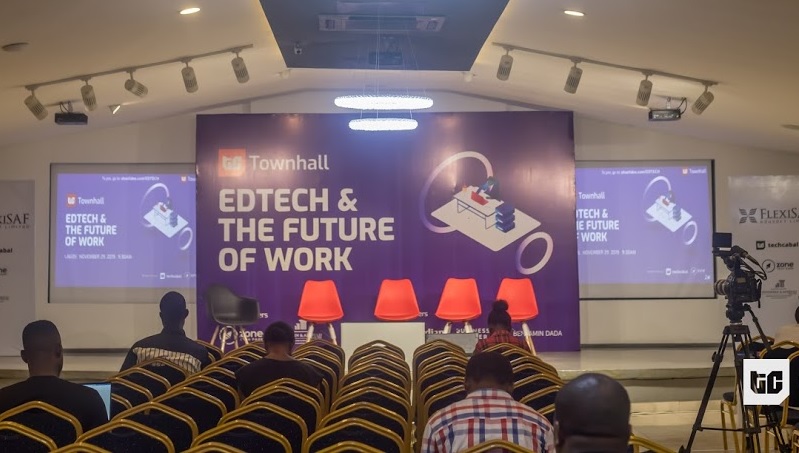 On Friday, 29 November 2019, TechCabal hosted its fourth townhall for 2019. TC Townhall: EdTech and the Future of Work was a dynamic event that brought together education technology entrepreneurs and innovators preparing people for the jobs of the future.

Held at the Zone Tech Park in Gbagada, the goal of the townhall was to identify the issues in the education sector and how people can latch on to skills that are relevant to the future of work. Unsurprisingly, there is a lot of interest in this discussion, as the hall was packed with nearly 200 attendees.

So if you missed the townhall, this is your one chance to catch up on what went down, so follow closely.

The doors opened at 9 am with the good folks at Odunjinrin and Adefulu, a law firm, providing legal advice for 30 minutes.

The main event officially kicked off at 10 am, with the welcome address from Chidi Uguru, Big Cabal Media’s very own Head of Business Development and Strategic Partnerships.

Next up was a lightning talk from Folawe Omikunle, Managing Director of Teach for Nigeria.

Following her talk was the keynote presentation made by Tomiwa Aladekomo, the CEO of Big Cabal Media. In addition to an earlier video presentation, Aladekomo’s presentation was important for context setting. For the benefit of the guests, he explored the trends in the edtech industry and who the startups are and what they do.

Sequel to the keynote presentation was the first panel session of the day: the State of Edtech in Africa. The panellists included: Tunji Adegbesan, Founder of GidiMo; Tayo Olaniyan, Nigeria Adaptation Manager at Ubongo Kids; ‘Dimeji Falana, CEO/Co-founder at Edves; Toyosi Akerele-Ogunsiji, Founder Rise Labs/ CEO of Passnownow. The session was moderated by Aanu Adeoye, the Managing Editor of TechCabal.

The panellists were as passionate about the problems in edtech as they are about their tech solutions. “Edtech is only going to prosper to the extent that the entire Nigerian system begins to rethink the process of investing in education,” said Toyosi Akerele-Ogunsiji, one of the panellists.

“The Nigerian educational system teaches you to read and regurgitate rather than to apply themselves to problem-solving and critical thinking,” she emphasized.

Beyond the challenges in the industry, the panellists explained how their solutions work and how they are addressing challenges that exist in the market.

Following this panel was a brief 15 minutes break and the show continued. The guests got to see product exhibitions from STEM MET and Imisi 3D, a startup using virtual reality to improve learning abilities for people.

Next up, Chika Nwobi took to the stage. Nwobi is the founder of the developer training company, Decagon. He revealed why he started the company and his passion to equip young people with the technical skills they need to succeed.

Passionate about the youth, Seyi and Tolu spoke about their work to train young people and what skills are needed for the future of work.

Following the panel was another product showcase, this time from ScholarX and FlexiSAF.

Guests also listened to another round of lightning talks titled: “For Edtech to succeed in Africa, we need?’. Anna Ekeledo, an Executive Director at AfriLabs gave the first talk, explaining how partnerships are important for edtech to succeed.

Dayo Koleowo, a Partner at Microtraction, gave the second talk. As a startup investor, Koleowo listed some things that EdTech startups must know when working in the industry. Here are a few:

2.  Have educators involved in building your solutions; don’t neglect the teachers in the consultative process.

Next, was the last panel of the day, and it was a huge eye-opener. Titled “Investing in Africa’s Edtech Sector”, the panel was made up of heavyweights: Kola Aina; the Chairman of Edu Platforms and Founder of Venture Platforms; Gossy Ukanwoke, the Founder of Beni American University; and Bunmi Lawson, MD/CEO of EdFin. The session was moderated by Bankole Oluwafemi, the Editor-at-Large at TechCabal.

Two of the panellists double as both investors and EdTech entrepreneurs, so they shared their experiences, especially the regulatory challenges in the industry.

The main event officially ended with the closing remarks and vote of thanks by Tomiwa Aladekomo.

Afterwards, there was an invite-only startup and investor matching session where selected startups had an opportunity to meet with potential investors.