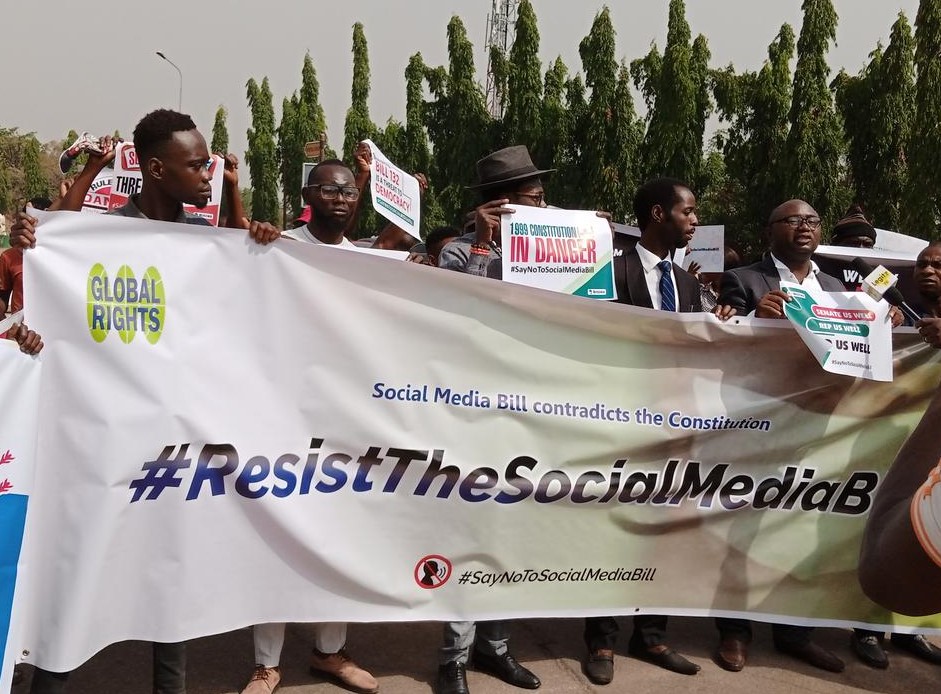 Even if the audience respectfully listened to him, Mohammed Sani Musa recognised that he might be defeated. His proposal to bring government regulation to social media looks headed for the dustbin of history.

The Nigerian senator was more or less a lone voice in the defence of his social media bill at the Senate’s public hearing held Monday at the National Assembly in Abuja. The public hearing was an opportunity for citizens and rights groups to directly prevent the bill from becoming law.

Officially termed the Protection from Internet Falsehood and Manipulation and for other related matters bill 2019, it seeks to give the Nigerian government regulatory control over conversations on social media platforms.

Fake news, in the bill’s logic, is the inevitable consequence of unregulated social media.

By making a relation to coronavirus’s rapid spread and impact including on businesses, Musa pressed the audience to see fake news as a virus in need of containment. Unless there are firewalls against the “epidemic,” he said, Nigeria will be worse for the unfettered freedom that comes with communication on social media.

In just under three hours of testimonies from civil society organisations, government agencies and private citizens, only the Nigerian Army and the Supreme Council for Islamic Affairs joined Musa in supporting the bill.

Key stakeholders in the media and broadcast space laid out clear reasons why the bill could not be allowed to pass into law.

From the Nigerian Communications Commission (NCC) to the Broadcasting Organisations of Nigeria (BON), there was overwhelming consensus that most of the bill’s provisions were already captured in previous legislations like the Cyber Crimes Act of 2015 and the nation’s Penal Code.

The NCC provides infrastructure for internet service providers to operate. But it has no mandate to interfere with content or determine appropriateness, according to Umar Garba Danbatta, the organisation’s executive vice chairman who spoke in a criticism of the bill applauded by the audience.

Emphasizing that “certain provisions of the bill are difficult to implement,” he drew attention to an aspect highlighted by most critics: the bill gives unconscionable power to the Police to be the judge and jury of proper internet content.

“The bill is undefined and misleading,” said Sa’a Ibrahim, chairman of BON, reflecting the opinion of private-sector broadcasters in Nigeria. Without mincing words, she declared the bill and its intention as “not necessary.”

The senator refutes accusations that his bill aims at internet censorship. But observers expect political, anti-government speech to be under particular scrutiny.

Penalties for breaking the social media law (if it becomes one) include a fine of up to ₦300,000 or three years imprisonment for individuals and ₦10 million for corporate organizations.

Here is its core contention: Facebook, Twitter, YouTube and similar platforms have become hotbeds of misinformation capable of fracturing national security. Social media is a fruitful avenue for finding valuable information and filling some of life’s needs. For example, many have found spouses online and live happily ever after, Musa acknowledged.

However, a social media bill is needed to provide a legal framework that guides Nigeria’s social space, Musa said.

Singapore was his reference for a society that has used regulation to achieve this goal, refuting the claim that his draft bill is a plagiarised copy of the Asian nation’s legislation.

Among other arguments, Musa sees the bill as a necessary defence against online harassment of minors and the improper dissemination of pornography.

His points did not hold water with the audience, to put it politely.

Omoyele Sowore, founder of Sahara Reporters, a digital media outfit, became the loudspeaker for a popular sentiment associated with the bill: that the protection from internet falsehoods is intended for the benefit of political leaders, not the general public.

A candidate in Nigeria’s 2019 presidential elections, Sowore was recently released on bail by the Nigerian government. He’s been accused of inciting revolution against the state, social media and his website being the alleged principal vehicles of his propaganda.

The social media bill empowers the Police to command internet shutdowns, an “operationally dubious” feature according to Shamsudeen Yusuf a representative of the Centre for Democracy and Development, a democracy watchdog group. Samson Itodo, executive director of YIAGA, a governance advocacy group, described it as a “legislative overkill.”

“This bill is dead,” Sowore asserted, and it was the definitive reflection of the mood in the hearing room. It would indeed be surprising if anything else is ever heard of this social media bill after the hearing.

“This is a private-member bill,” Michael Opeyemi, the chairman of the Senate committee on judiciary, human rights and legal matters, clarified after testimonies. The Senate has not taken a position on the bill as there are senators for and against the bill, he said.

“We will consider all of this and advise the senate based on our findings after the consideration of all preponderance of opinion written and expressed,” Opeyemi said. “We will go by what we see as the overriding public interest.”

Musa had left the venue by this time. He had conceded in his testimony that his will didn’t need to prevail at this hearing, though he remains committed to fighting for the bill. Any objective reading of the room should declare him the presumptive loser.

The public hearing brings the period allowed for public input on the social media bill to an end. It’s now up to Opeyemi’s committee to make a recommendation to the Senate.

Editors note: Alex Onukwue reported from Nigeria’s National Assembly in the Federal Capital Territory, Abuja. This story was written with logistical and funding support from the Paradigm Initiative.