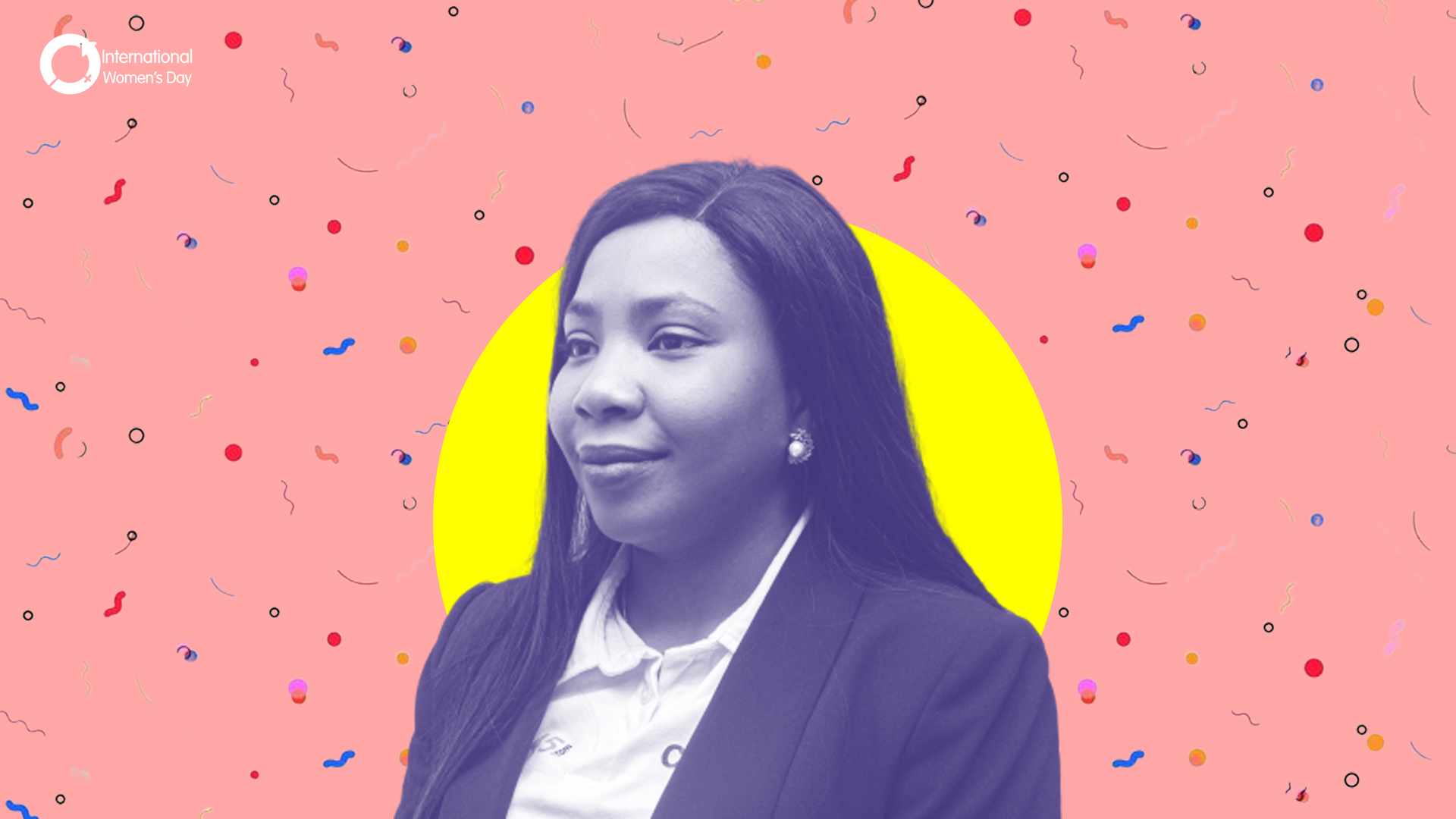 Mayokun Fadeyibi grew up in two university communities with five sisters raised by two university professors. Growing up between Ife and Lagos, southwest Nigeria, Fadeyibi moved to the US where she spent another 13 years studying and obtaining her undergraduate, graduate and postgraduate degrees in Mathematics and Business.

Family obligations as a new mother to a set of twins called in 2014 and so she moved back to the country where she joined global classifieds platform OLX as the Senior Manager, Business Development and later went on to serve as the Nigeria Acting Country Manager. From OLX, Fadeyibi moved to Sankore Global Investments where she served as Chief Operations Officer/ Vice President for Innovation & Strategy.

“So, every single person that is looking to sell their car on Cars45, that whole process of coming to a Cars45 center and getting it inspected and getting a valuation on it, I manage that side of the business,” the amiable Fadeyibi says at her Cars45 office on the Lagos mainland.

Co-founded by Etop Ikpe, Iyamu Mohammed, Sujay Tyle, and Peter Lindholm, Cars45 launched in 2016 as a digital platform that allowed individuals buy, sell or trade in their used cars. Sellers can log onto the company’s platform, use the online car valuation tool to receive a quote, have an inspection carried out in one of the 70 experience centers in the country and outside, and get paid. Buyers and individuals who want to trade in now have access to a fleet of inspected cars to choose from.

“The used-car market in Nigeria is generally a big hassle. There’s so much mistrust, no vehicle history, and not much of a structured dealer network,” CEO, Etop Ikpe, told TechCrunch in 2017 after the company raised a US$5 million Series A funding from holding company, Frontiers Car Group.

The 1970s were Nigeria’s automobile golden age. The government had reached agreements with Germany’s Volkswagen and Peugeot Automobile of Nigeria (PAN) who set up plants in the early 70s and began the Completely Knocked Down (CKD) or Semi-Knocked Down (SKD) assembly of passenger cars in the country.

Agreements with companies like the Anambra Auto Manufacturing Company (ANAMCO), Leyland Nigeria and Daimler Benz saw the assembly of commercial trucks. But increasing dependence on oil and a crash in oil prices in the late 80s gradually began crumbling the activities of these manufacturers through a series of import and forex challenges.

Out of Nigeria’s 14 million cars, a PricewaterHouseCoopers report says the ratio of used to new imports as at 2014 was 75%:25% In other words, for every brand new car on a Nigerian road, there are 134 used ones riding next to or past it. While the report predicts that the automobile manufacturing industry can be revived through concerted government efforts by 2050, it argues that the demand for used cars will not entirely go away.

Used car sales are concentrated in five cities across Nigeria: Kano, Kaduna, Abuja, Port harcourt and Lagos which accounts for 60% of the market but sales have always been highly unstructured and leaves car buyers susceptible to fraudulent transactions.

It is into this market Cars45 launched to bring some measure of order and transparency. Fadeyibi, since joining the company in 2018, has contributed to growing its business operations increasing the number of experience centers from 51 in 2018 to its current 70.

In addition to its consumer-to-business  (C2B) model, Cars45 also operates a consumer-to-consumer (C2C) model through its marketplace platform that facilitates commerce directly between buyers and sellers. Key in its value chain, however, is its thorough inspection and valuation of every used car that passes through or is offered for sale on its platform.

“We have two channels through which you can sell your car, you can either sell it through our wholesale channel, which is to our dealers on our backend. Or you can decide that the pricing you’re getting from the dealers, you know, doesn’t quite work for you and you’re willing to wait a little longer,” Fadeyibi explains.

Sellers who offer to wait have their vehicles moved to the company’s marketplace website where end consumers can then make offers for it.

“We not only do that inspection process to ensure that all cars are verified even for marketplace cars, but for buyers that are interested as well, we also screen them on the backend so you as a seller are not getting calls from just anybody.”

All purchases happen at the company’s experience centers where buyers satisfied with the vehicles pay the balance of an upfront 30% deposit while the company charges a processing and admin fee. Dissatisfied buyers can take a look and select from other available cars in the experience center or have their 30% deposit refunded if they do not want to go through with the purchase.

Cars45 has taken its business to two more African cities: Nairobi and Accra, markets which Fadeyibi says are very similar to Nigeria’s with very slight differences in the ratios of used to brand new cars, where the cars come from or the type of cars predominantly available on offer in these markets. With plans to launch more centers in Mombasa, Tema, Kumasi and across more African countries, there is a huge opportunity in the sector and Cars45 is tailoring its services to suit and fill these needs.

Whether the manufacturing industry is resuscitated to what was obtainable in the 70s, Fadeyibi thinks the used car industry and new automobile manufacturers can and will co-exist and thrive side by side.

“If you look at the Innossons of this world, when people buy their vehicles, they are going to fall into the used car market. And so, we have to have structures even in the used car market to ensure that we’re just driving that slider,” she says.

“And that’s one of the things that we are also doing with some of our partnerships right now where we’re partnering with some of the new car manufacturers to drive trading so that way people can come in, sell their car through Cars45 or trade in to get a new vehicle.”

There’s also the financing issue. Used cars can sometimes be a lot less expensive than brand new ones depending on where they are sourced from and the conditions they are in. In Ghana, Cars45 has partnered with CFAO to have individuals trade in their used cars and get financing to make another purchase. In Nigeria, it is introducing a similar partnership with Suzuki.

Fadeyibi says one of the successes of her career has been the ability to grow into bigger roles and expand her capabilities thanks to employers who have entrusted her with more faith and responsibility.

“For example at OLX, you know, when I came on board I was a business development manager and under business development, I took care of partnerships and business intelligence. But I had the opportunity to do a lot more work across the business from marketing to customer service to sales and that has helped me to grow and develop.”

“I think now that you mention it, I do have to give credit to my parents,” Fadeyibi says when I ask about her gender experience as a C-suite executive. With six daughters, her father, she says, was always keen on teaching them how to be vocal, assertive and to not assume there’s a lesser quality of life deserving of them based on their gender.

“Because of that foundation, it has helped me come into the corporate world knowing that there might be an inherent or silent bias towards me as a woman but also knowing that, if I can prove myself capable, those biases or those discriminations tend to have no choice, but to fall away.”

A lot of this has also come by way of learning to speak up or lean in at every table where she’s been invited to sit at in her career thus far.

And she’s carried bits of these into her managerial roles even in decision making which many consider at the beck and call of senior executives solely. Collaboration is key, she says, in decision making; involving stakeholders, central support teams, center officers who are on the field as against sitting in her office making decisions based on spreadsheets. This has come in handy recently with deciding whether an experience center needed to move a few blocks down the road or not.

If there’s one thing Mayokun Fadeyibi’s leading roles have taught her about building successful teams and companies, it is the importance of making sure every employee comes to a point where they own a stake in the business. If they do not buy into the vision the company is chasing, there is a lot more difficulty in not only understanding what part they play in the larger scheme of things but also being able to play that part well.

As someone who was raised in two university communities, Fadeyibi is not unaware of the deficit of higher institutes of learning in preparing younger Nigerians for the corporate and business worlds of the future. Through the Young Professionals Bootcamp, an initiative of The Platform, where she volunteers, Fadeyibi alongside well-known entrepreneurs and top-tier corporate executives, teach and speak to young school leavers in a 3-day bootcamp where they learn soft skills in communication, corporate culture, basics of business and other such trainings that enable them makeup for what is lacking from their university education. External support classes, mentoring sessions and competitions sustains these training sessions outside the boot camp until they get job placements.

As we wrap up our interview, Mayokun Fadeyibi tells me her daughter asked a few evenings ago if she could live with a 70 (out of a 100) on a test score she was taking at home.

“I asked her-what do you think? And she said, nope! And I said to her, so do it again.”

It is this standard of excellence, consistent excellence, that Fadeyibi expects of herself every step of the way.