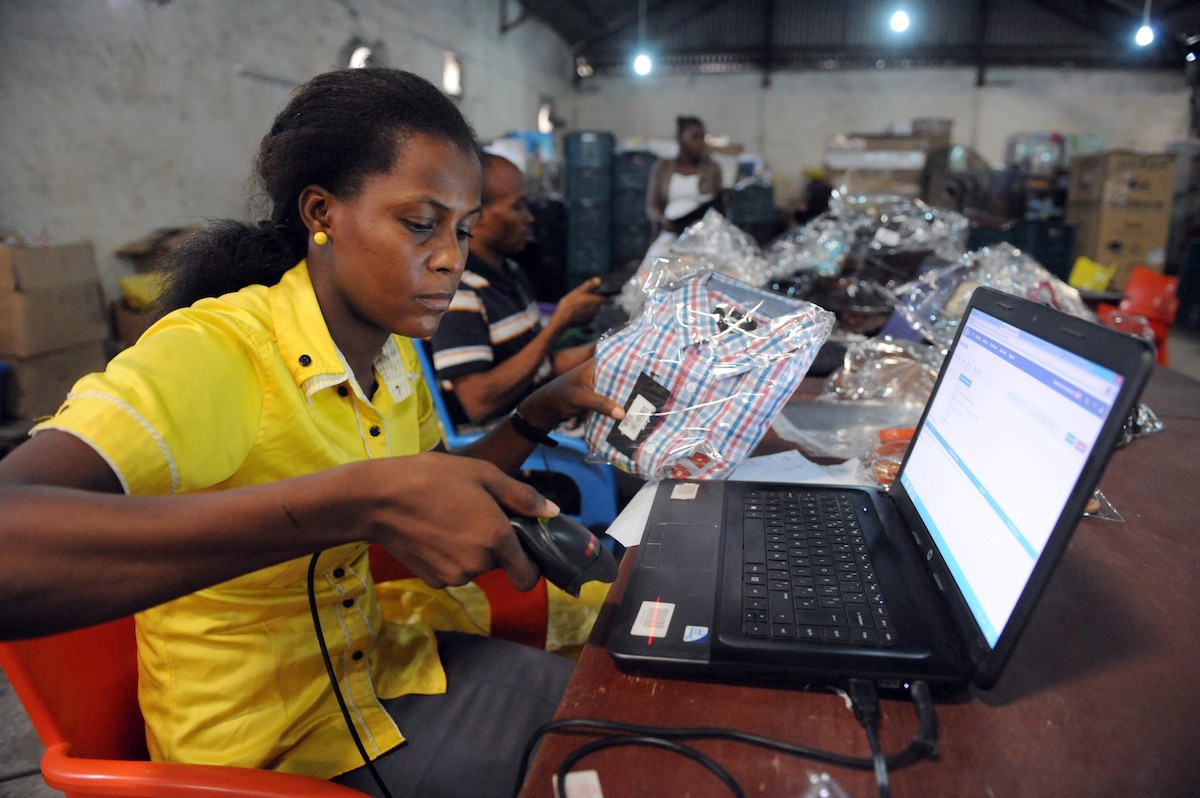 A new competition is afoot in Nigeria’s payments industry. Since the start of the year, four of the country’s biggest payments services have increased their focus on e-commerce. Between February and April, Remita, Flutterwave and OPay each launched e-commerce platforms.

Guarantee Trust Bank (GT Bank), one of Nigeria’s most profitable banks, made the first move. A few years ago, the bank developed Habari, a superapp that provides everything from streaming to e-commerce. In early March, GT Bank’s CEO, Segun Agbaje explained that Habari will play an important role in its plans to dominate Nigeria’s payments business.

Other payments companies have since introduced their own e-commerce solutions.

In late March, Remita announced Paylink, a platform that allows users to easily set up their online stores and accept payment. Owned by SystemSpecs, for years Remita has operated as an enterprise solution, processing payments for government institutions and educational bodies. Paylink is its foray into the consumer payment business dominated by Flutterwave and Paystack.

OPay, the fast-growing mobile money operator, is also doubling down on e-commerce. The company has developed two products, OMall and OTrade, to cater to B2C and B2B e-commerce respectively.

In late April, Flutterwave jumped on the e-commerce bandwagon, with Flutterwave Store. The portal allows African merchants to create digital shops to sell online. It is available in 15 African markets and uses Flutterwave’s architecture to accept payments.

“[This] is not a direction change,” Olugbenga GB Agboola, CEO of Flutterwave told TechCrunch. “We’re still a B2B payment infrastructure company. We are not moving into becoming an online retailer, and no, we’re not looking to become Jumia.”

While it may be true that it has no plans to become Jumia, it still doesn’t tell the full story. Why are Flutterwave, OPay, GTBank and Remita entering the e-commerce market now? To understand, we need to understand how Nigeria’s e-commerce market has changed over the last eight years.

There have been a number of false starts to Nigeria’s e-commerce industry. But the industry really took off with the emergence of Jumia and Konga.

According to Jason Njoku, CEO of IrokoTV, both companies heralded the first phase of the consumer internet in Nigeria and across Africa, wrote in a blog post.

Investor confidence in Nigeria’s consumer internet was high. The country had a growing young population. Mobile penetration was also increasing, improving tech adoption and allowing more people to get on the internet for the first time. Nigeria’s internet users grew to 41% in 2013, up from 20% in 2009.

Also importantly, the “Africa rising” narrative which grew stronger the first half of the 2010s, fuelled optimism about the prospects of Nigeria. “Africa is the world’s fastest-growing continent,” said a 2013 special report by The Economist, titled A Hopeful Continent. Nigeria was at the heart of this.

Buoyed by crude oil, the country’s economy was modernising fast. The price of oil had been consistently high since 2005, only dipping once in 2009 during the Great Recession. Oil returned high growth territory in 2010, rising to $105.6 per barrel in 2013.

As the economy grew, analysts predicted that income levels would rise and a new consumer class would emerge – the rise of the middle class. “At current growth rates, Nigeria is poised to become a major economic force in the coming decades,” said a 2014 McKinsey report [PDF].

The African Development Bank (AfDB) defines the African middle class as those spending between US$2 and US$20 a day. In 2013, an estimated 8 million Nigerian had an annual income of more than $7,500 according to McKinsey. That number was expected to grow to 35 million, from a total population of 160 million, by 2030.

This would have huge implications for the retail market, analysts predicted. In 2013, Nigeria had a consumer market of $400 billion, said a McKinsey report. The industry was growing at 13.3% yearly and, according to Deloitte [PDF], the middle class was responsible for this growth. By 2030, the consumer market was predicted to grow to $1.4 trillion.

These predictions drove optimism about the Nigerian consumer market, triggering an intense competition between Jumia and Konga.

But rather than compete on value or deepen the market, both companies went to war against each other, Jason Njoku wrote in a blog post.

“It became one no longer based on customer satisfaction or loyalty, nor one built on unit economics and fundamentals of commerce. Nor one based on shareholder value,” he explained. “This became total war.”

Both companies used aggressive growth tactics and partnerships to improve their reach relative to competitors.

Unfortunately, the first era of the Nigerian consumer internet witnessed false growth expectations. “Though there has undoubtedly been income growth and maturation in Africa,” Standard Bank wrote in a 2014 report, “there has arguably been an exaggeration of this growth over the course of the past five years as the broader “Africa Rising” narrative has taken root.”

In Nigeria, the expected rise of the middle class never happened. The commodities boom that ushered in the era ended by 2015. The price of oil crashed to $49.5 in 2015. Suddenly, the economy stopped growing and went into a recession by 2016. Four years later, the economy is still growing far below pre-2012 levels.

The population became poorer and the rise of the middle class never happened. The World Bank says the Nigerian middle class remains small and many could easily fall below the poverty line.

This has affected the growth of e-commerce in Nigeria.

Why the new interest in e-commerce?

To be clear, Nigeria’s economic realities have changed. The population is much poorer today than it was ten years ago. However, what has changed is the composition of the market – payments, logistics, and changing merchant expectations.

Adoption of online payments in Nigeria is growing fast for both merchants and their customers. Before 2015, integrating a payment gateway was expensive and technical. It cost ₦150,000 to integrate payments using QuickTeller in the early 2010s. Small businesses avoided these concerns by signing up as vendors on the popular e-commerce websites.

But things have changed in the last five years. Thanks to companies like PayStack and Flutterwave, payment integration is easier now.

More people are comfortable and feel safer with online payment today than five years ago. Old worries of fraud are decreasing and more people are using digital payments options to complete transactions.

Logistics has also witnessed a major change over the last five years and it is helping the new e-commerce environment. The number of logistics companies is growing fast across the country. In Lagos, Nigeria’s commercial capital, the delivery business is becoming heavily decentralised. The decline of bike hailing has forced operators to pivot into deliveries.

Gokada and MAX have over 300 bikes making deliveries daily, the highest among logistics companies. Gokada has 2,000 bikes and says it could easily deploy half of those as demand increases. Other operators including Kwik Delivery, ORide and GIG are also doubling down reaching more non-enterprise customers.

Also, companies like Gokada are making it easier for both e-commerce businesses and individual merchants to make deliveries. With their app, customers can make delivery orders and have them fulfilled quickly. Jumia is also using Gokada to make food delivery faster and more efficient.

Payments companies have taken notice of this trend. Merchants too.

Online merchant behaviour is changing. In the past, small scale retailers were comfortable simply listing their products on platforms like Jumia and Konga. This is a cheaper alternative to running their own websites. These e-commerce platforms have a lot of customers and many vendors. They also handle everything from payments to deliveries.

But today, merchants crave visibility. Many have developed their own websites and are harnessing social media to promote their products. Twitter, WhatsApp and especially Instagram provide more eyeballs and have a high chance of converting customers. Payment is easier to handle and logistics services are more accessible to fulfil deliveries.

There are thousands of SMEs on social media selling everything from shoes to puppies. They do not want the rules and loss of visibility that comes with signing up on third-party e-commerce websites. They want their own customer base and are working hard to achieve this.

Flutterwave, OPay, GT Bank and SystemSpecs understand these trends and have developed different strategies to win over SME business owners.

Speaking to TechCabal, Patrick Ikpelue, Head of Payment Solutions at SystemSpecs, said Paylink is specifically designed for small businesses. “This is an alternative if you don’t want to deal with other e-commerce platforms or you don’t have the funds to build your own website,” he explained.

While Flutterwave is not trying to be next Jumia, Flutterwave Stores provides the individual visibility that merchants crave. To fulfil deliveries, the portal relies on the decentralised logistics environment. It will partner with third-party logistics operators like SendBox to deliver orders.

OPay’s OMall and OTrade cater to B2C and B2B e-commerce respectively. The company has grand plans to open up the sector and is leveraging its customer base and over 1,000 motorbikes to fulfil deliveries.

For GT Bank, tapping into this trend is important to their ambitions. “People say to me that it is impossible for a bank to build a successful payments business,” Segun Agbaje, GT Bank’s CEO said in late February. “[But] who told you we will build it as a bank?” he asked rhetorically.

According to him, only the company that can provide the best customer experience will win the payments space. Technology alone cannot do this. For the last few years, GT Bank has used different events to attract small businesses in the fashion and food industry.

“The idea of the fashion fair [and] food fair is so that we continue to engage with small businesses who are in those segments,” Agbaje explained. “So already we are beginning to put that balance together between a digital platform and the human experience.”

In addition to the new e-commerce realities, new competition in the payment industry is forcing companies to rethink their strategies.

Flutterwave over 86,000 merchants across Africa on its platform. As a core payments service, merchants will use the platform even without the latest virtual store service. However, the payments landscape is changing and the risk of losing customers is higher with new competition from bigger platforms.

Recently, Facebook developed its own online stores. The social media giant has big payment plans and is ready to deploy them on its large ecosystem. Instagram, the home of many Nigerian small businesses, has been testing e-commerce features. Last year it launched Checkout on Instagram, allowing users to buy from brands without ever leaving the app.

Facebook also recently developed a new payment service for WhatsApp. WhatsApp Pay is built on top of WhatsApp Business which provides enhanced support for businesses. So far WhatsApp Pay is only available in Brazil.

Google and Apple have also rolled out their own payment options leveraging their platforms for adoption.

To avoid losing their merchants to these platforms, payments companies are adopting the “platform” approach, providing a full e-commerce experience to merchants.