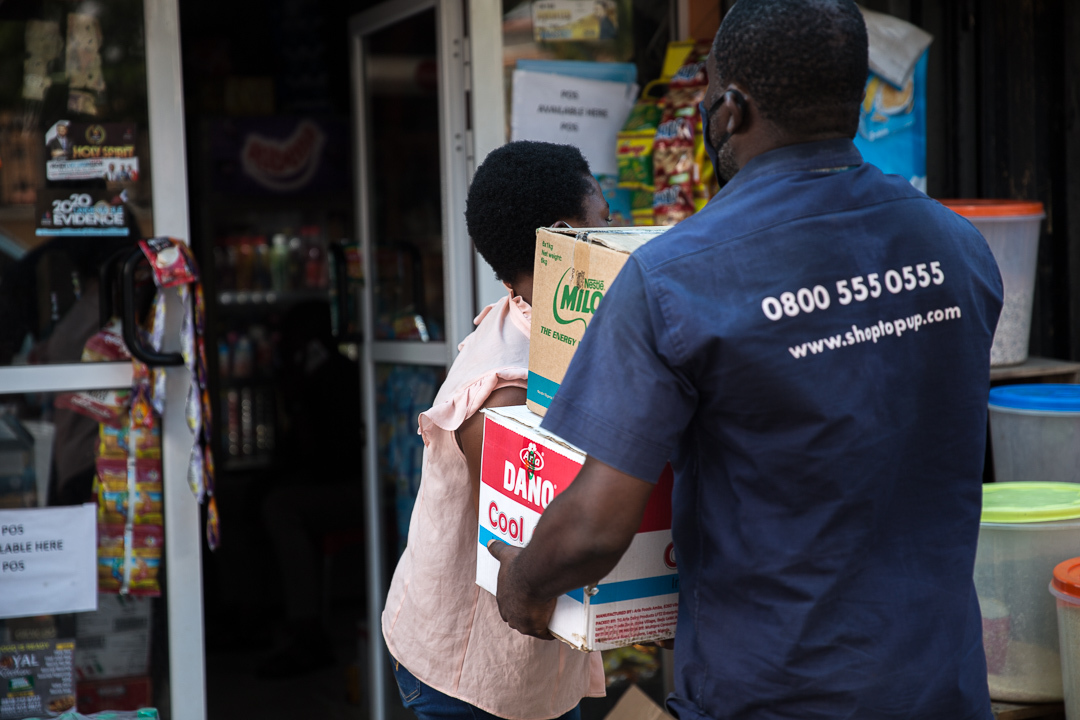 Shoprite, SPAR, Mr Price, Game, Ebeano and JustRite are some of the biggest retail chains in Nigeria. They’re increasingly becoming a household name as they position themselves for the growth of a Nigerian middle class. The Nigerian retail market is worth $105 billion, yet modern stores account for just 2% sales.

Informal retailers – mom and pop stores, street vendors and open markets – continue to dominate the consumer market. This is still the most popular way to purchase goods like soaps, milk and other household items. Collectively, informal stores account for 98% of all retail sales in Nigeria, according to Deloitte, making it important to consumer goods companies.

However, the market is highly fragmented. With 1.2 million sellers scattered and unorganised across different locations in the country, distribution operations are complex and challenging. Expectedly, multiple middlemen exist in the supply chain causing the price of goods to rise as products move down the chain.

One company is trying to fix these problems. TradeDepot, a four-year-old retail startup, is using technology to solve logistics issues in the informal market.

Founded in 2016 by Michael Ukpong, Onyekachi Izukanne and Ruke Awaritefe, TradeDepot is focused on the fast-moving consumer goods (FMCG) sector and helps to connect consumer goods distributors to retailers in the informal sector.

“Before this, my cofounders and I had been running a consulting business since 2005,” Onyekachi, TradeDepot’s CEO, told TechCabal. “It was a business in SAP implementation, and a lot of the work we did was in the FMCG space.

“So we did the ERP and back-office operation for Coca Cola, Cadbury Nigeria and Ghana, Peugeot, the UAC group and quite a few other FMCG companies.”

“[This] helped us get very familiar with the space because if you are rolling out an ERP you have to model every process and build it into the tech platform.”

Onyekachi explained that the team discovered implementing these solutions for multinationals was simple. For the supply side, “you would usually have a global blueprint you are building up from.

“We readily see that for each of these companies the back office was very straight force, but the moment you were looking to build out the demand side of the business, there was no model to replicate, because the way the demand side works here was very different from many of those mature markets,” Onyekachi told TechCabal.

While other markets typically have large retail chains, the fragmented nature of the retail market means companies would have to design custom implementations to get their products to millions of stores.

“That fragmentation makes it a very complex process,” Onyekachi added.

“So over the ten plus years of doing this type of consulting work, we repeatedly found ourselves working with FMCG companies trying to come up with a workaround or consulting solutions to address this problem.”

By 2015, the co-founders decided to build a solution of their own that solves this problem. The plan, Onyekachi told TechCabal, was to design a platform that manufacturers could just plug into and their product would find their way into these small stores.

Although TradeDepot launched in 2016, the company started engaging with retailers in 2017. Since then, “growth has been interesting,” Onyekachi shared.

Growth in the informal retail market

The startup has built a network of over 40,000 micro retailers, allowing them to place orders through different platforms including a mobile app, WhatsApp, USSD and toll-free phone calls. The TradeDepot platform processes order payments and offers inventory management for users to manage their stock. The company declined to comment on the volume of sales on its platform but said its sale volume has “tripled” over the last 12 months.

“Essentially what we are trying to do is to put the power of e-commerce in the hands of informal users who are not the most sophisticated users in the market,” Onyekachi said, “but who are doing very important businesses driving serious volumes and are eager to get ahead.”

As a B2B e-commerce plug for the offline market, TradeDepot is playing in a unique market. Regardless of the overall health of the Nigerian economy, the offline market continues to record huge sales transactions.

“While as a country we [Nigeria] don’t have enough purchasing power across many demographics,” Onyekachi explained, “the truth is that when it still comes to essentials items, there is a minimum amount each family ends up spending.”

The startup operates its own warehouses while orders are fulfilled using a fleet of vans and motorbikes and deliveries are sometimes outsourced to third-party operators. Onyekachi explained that while TradeDepot operates delivery vehicles, the company is less concerned about who owns the logistics assets including the bikes, vans and warehouses.

“What we focus on is making sure that we control the process,” he told TechCabal. “It’s less important who owns the asset, it is most important who controls the process. So in our fleet, we have third-party owned assets.”

TradeDepot handles distribution for some of the biggest FMCG companies in Nigeria including Nestle, Nasco, Chi, PZ Cussons, Unilever, Kelloggs, and PZ Cussons.

As a supply chain startup, TradeDepot is sometimes compared to companies like Lori Systems and Kobo360. However, in reality, they serve different aspect of the market.

Lori and Kobo360 aggregate trucks and help businesses and individuals move cargo anywhere in the country, say from the seaport to a warehouse up north. On the other hand, TradeDepot is focused on moving goods from manufacturers or distributors directly to the retailers in addition to store inventory management.

While it operates its own warehouses and fleets of vans and motorbikes, TradeDepot says it sometimes outsources deliveries to other companies.

Since it launched in 2016, the company has publicly raised $13 million to scale its operations. In April 2018, it closed a $3 million round in a round led by Partech. The company’s latest round is a $10 million pre-Series B investment from Partech, IFC, Women Entrepreneurs Finance Initiative (We-FI) and MSA Capital.

“TradeDepot is a rising star in the African internet landscape, helping digitize a substantial underserved informal retail segment, which is the pillar of economic growth in Africa,” said Wale Ayeni, Head of Africa Venture Capital Investment at IFC. “The founders’ vision to build a digital platform that improves the unit economics of serving the mass-market is one that we feel privileged to support,” he added.

Following the new raise, TradeDepot is expanding its operations to include financial services and credit facilities to its customers.

The informal sector, including retailers, typically operate outside both the regulatory and support systems of the government and the formal economy. Many businesses are not registered businesses, they don’t have financial records, tax information, or other such formal information that would make it easy for them to access services like loans.

Yet, without increasing their working capital, the majority of Nigeria’s 1.2 million informal retailers will remain small scale.

“A small store potentially has the ability to do ₦5 million to ₦8 million sales in a month,” Onyekachi told TechCabal. However, most retailers are unable to do this sustainably because their working capital is too low. “Because they have ₦200,000 of working capital, they might end up making a purchase every two days in a month, that is very expensive and inefficient.”

“And because they are only buying certain volumes, there are discounts and promos they are not able to access,” he added. “This is a picture of the problem.”

By getting sellers to use its platform to order for items and manage their inventory, TradeDepot can aggregate data on their business and use that to build credit ratings for these merchants.

“In [our] scenario where we are getting them to do their transactions through our platform, and we have a transaction history for them, we are able to do the scoring, underwrite the risk of getting them the additional capital they need,” Onyekachi said.

He explains that by improving access to capital, this could improve retail activity in the market and reduce the chances that sellers run out of stock.

There is also a net social impact with this lending route. The informal market in Nigeria, like most parts of Africa, is dominated by women.

Historical gender imbalance in education and social prejudices have forced more women away from the formal sector into the informal economy. By using their sales data to issue loans, TradeDepot could provide these women with crucial capital to expand their businesses and possibly formalise their operations.

“Women play a pivotal role in driving economies across Africa, but lack of access to capital, limited market linkages, cultural norms and other challenges often prevent them from achieving the success they want,” Hanh Nam Nguyen, Program Manager at We-Fi said in a statement. “We-Fi financing will incentivize TradeDepot to build stronger women-led small and medium enterprises (SME) retailer and distributor networks, which will support them to become drivers of economic growth in their communities.”