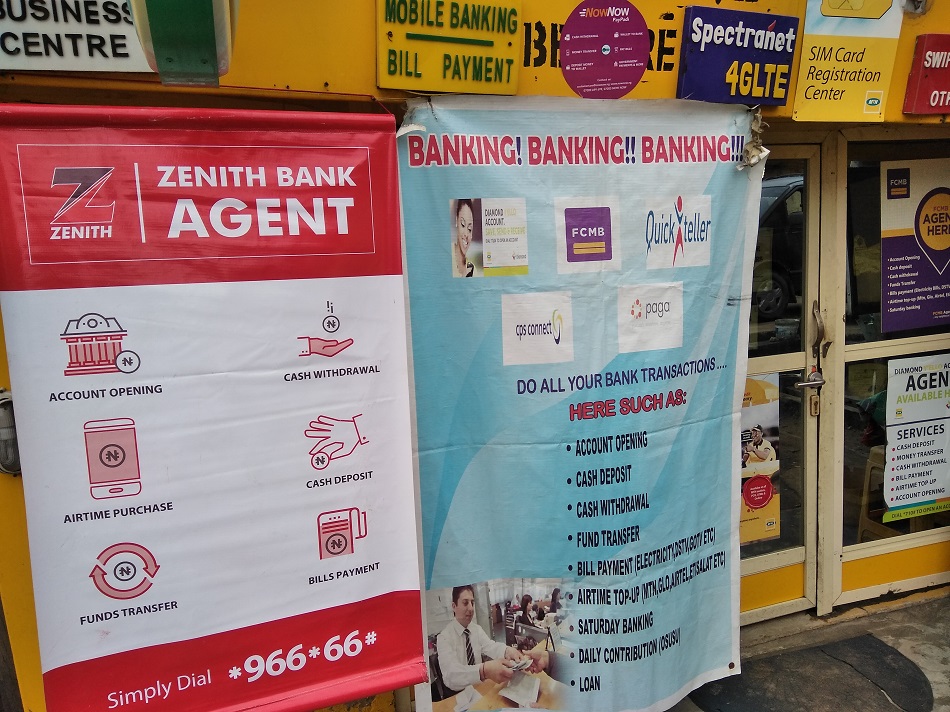 On 11 July, mobile money agents in Agbado/Oke-Odo Local Council Development Area (LCDA), a suburban area in Lagos, received a notice. The grassroots government of the area had introduced a new weekly levy of ₦600 for all mobile money agents.

“They just sent the circular about two weeks ago that they’ll start locking up shops and kiosks and business places if we don’t pay before the July 25,” said a mobile money agent identified simply as Tina.

Agents disregarded the notice, hoping the move would be reconsidered and the levy will never be collected.

That didn’t happen. By July 25, the LCDA started enforcement.

“This morning [July 25], we saw his [LCDA] taskforce everywhere victimizing people forcing them to pay the money by force,” Tina posted on Twitter.

She explains to TechCabal that there was no prior dialogue between mobile money agents in the area and local authorities. Both the notice and enforcement were decided unilaterally and carried out in a similar manner.

Agency banking is gradually becoming an important part of the Nigerian financial system. Around 60.1 million Nigerian adults are financially excluded according to EFInA [PDF]; meaning they have no bank accounts and are unable to access credit, insurance or basic banking services. Another high number of adults are underserved as banking services are limited in their locations. EFInA estimates that while 40% of adults had access to payments services, only 2% had access to either savings or lending providers.

Agent banking is one fix for these. By enabling agents to carry out basic banking operations – money transfer, withdrawals and account opening – agency banking is crucial to financial inclusion in the country.

But in the Agbado/Oke Odo area, the government has a different understanding. A predominantly rural neighbourhood with fewer well-connected road networks, the area generated ₦293.9 million revenue in 2015. It had the 14th lowest revenue among the 57 LCDAs in Lagos. Together, these LCDAs generated over ₦22 billion in 2015.

However, Agbado/Oke Odo is also highly populated. Although statistics are unavailable, the area is part of the larger Alimosho Local Government Area which had a population of 2.05 million in 2015; the highest in Lagos.

The Agbado/Oke Odo LCDA has high levels of commercial activities and has the highest number of shops in Lagos. But according to a 2015 government report [PDF], the LCDA has limited banking and financial services. There are only ten bank branches catering for over 6,500 shops, markets and kiosks in the area. Mobile money agents help to provide basic banking services to small businesses and individuals residing in the area.

The grassroots authorities see mobile money agents as just another group of people who should pay levies. Every small business in this area – passenger motorcycles, taxis, informal traders, etc – is heavily taxed.

Tina says she already pays over ₦27,000 annually as levies to local authorities for everything from her shop’s signboard to a tarpaulin extension outside her shop. Shop owners also pay a separate levy of around ₦2.000 if they own TV and radios.

She told TechCabal that mobile agents were not expected to pay separate levies to operate. In addition to bank stamp duty of POS withdrawals, payments companies automatically collected the charges on each transaction.

“We thought that alone was enough,” Tina said, “until we got the circular.”

“It’s seriously crazy, that’s why we had to speak up this time [because] adding this to the bills we already pay is outrageous.”

A few mobile money companies like Paga have indicated that they were not informed about the new levy before it was enforced.

Mobile money agents are already suffering a significant impact as a result of the pandemic. According to a recent study by EFInA, monthly income of agents has dropped by almost 50% since the outbreak of COVID-19. Pre-pandemic, agents earned an average of ₦54,662 monthly, but now that figure has dropped to ₦27,944 monthly.

Mobile money agents in the area have already teamed up to oppose the new levy.

At first, they organised themselves in a WhatsApp group chat, but the matter has now been taken up by the Association of Mobile Money & Bank Agents in Nigeria (AMMBAN).

AMMBAN says it represents all money agents in the country and has been having conversations with the LCDA authorities since Monday, July 27.

In a conversation with TechCabal, Lagos State Chairman of AMMBAN, Azeez Olowu said the issue was being handled. He did not provide more details.

In a memo to members, AMMBAN said it was invited for a meeting with Agbado Oke Odo LCDA authorities on Monday, July 27. “But unfortunately we could not reach a conclusive decision,” it said.“In view of this, I will urge all AMMBAN members to keep calm and continue with their usual business but shun any form of circular related to levy collection or tax by any contractor from Agbado Oke-Odo LCDA till further notice.”

When asked if similar levies have been imposed elsewhere in Lagos, Olowu said no, claiming this is an isolated case.

Yet this is a slippery slope especially for a country with a history of rent-seeking. If this alleged isolated case is not seriously opposed, there is a tendency that other grassroots governments across the country will impose their own levies on mobile money agents. This will be catastrophic to the financial inclusion goals pushed by the Central Bank of Nigeria (CBN).

A recent AMMBAN press release says this may already be happening.

“[We] have been inundated with distasteful reports of how local government councils/LCDAs officials and their contractors have been intimidating, disrupting and in many instances molesting our members and indeed, all Mobile Money and Bank agents across the country on the basis of the collection of levies and daily tolls,” AMMBAN wrote on July 27.

“Any levy or toll outside [regular charges, levies and taxes] are devilish and anti-people,” it added.