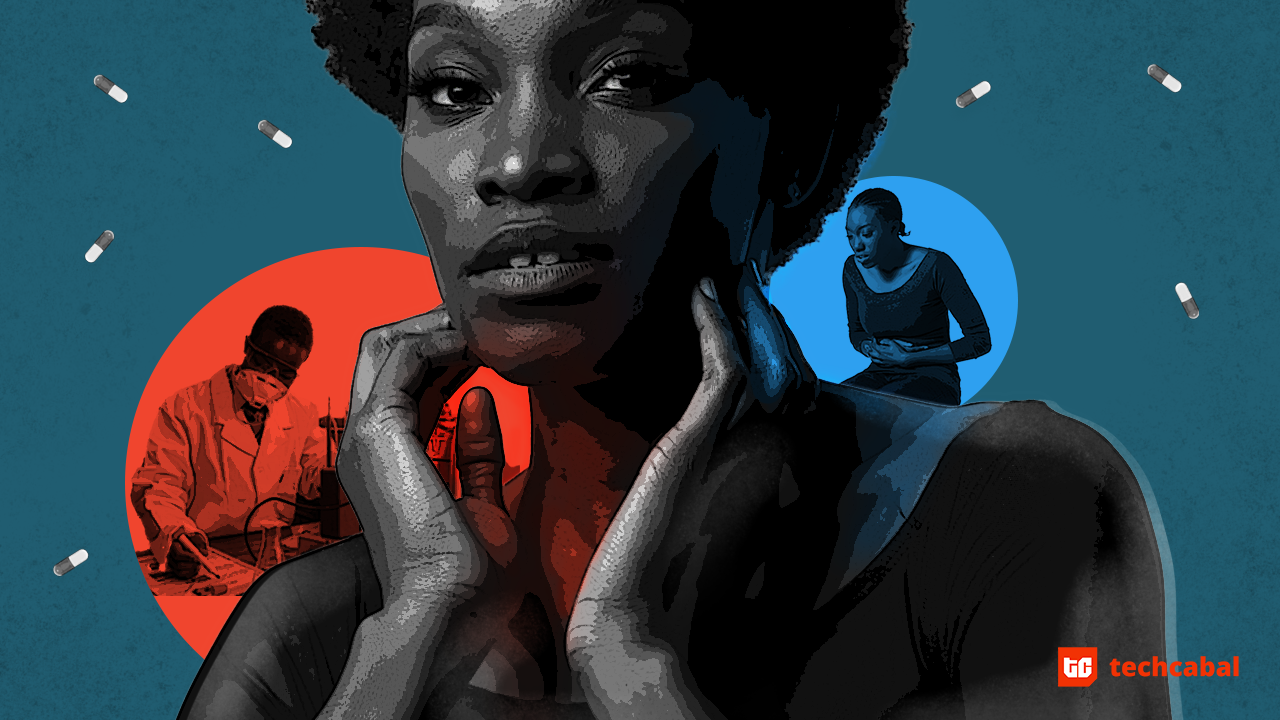 This is a summary of journalist Nana Aisha Salaudeen’s story: a sharp pain registers its presence in her lower abdomen and disappears in 2015. In 2016, it returns with a vengeance and thus begins an unending series of  hospital visits amidst sharp, debilitating pelvic pain, heavy bleeding and the incessant need to pee. Countless medical tests fail to shore up what the cause of the pain is. Or the heavy bleeding. Or the incessant urination. And the years roll by painfully. 2017. 2018. 2019.

In all these years, medical doctors questioned her complaints often referring to it as psychological. In other instances, they simply were directly or indirectly dismissive of her complaints.

“I remember the very first time I went to the hospital in Bradford,” Salaudeen tells me.

They asked if she had just moved to the rocky and mountainous city, hinting that long treks might have been responsible for the pain.

One doctor,  earlier this year asked, after she complained she was peeing as much as 18 times in a day; “are you sure you’re not being dramatic?” and made jokes about her being a Nollywood actor.

Doubt is something women encounter often in consultation rooms and there’s a long history of medical proposition and practices that experts say have led us here.

The 4th and 5th century studies of Plato and Hippocrates attributed women’s illnesses to a “wandering womb” that traversed a woman’s body wreaking havoc on her organs. By the 19th century, driven by theories postulated by scientists like Freud, hysteria had become a predominantly female malady with more theories arguing that it was indeed a psychological rather than physical one.

This long winding history of dismissing women’s physical ailments as a by-product of a psychological affliction has not gone away, especially compelled by data that shows women are more prone to suffer from anxiety and depression than men. Often, it is subconscious and both male and female doctors are complicit.

It is no surprise it took nearly six years for Salaudeen to have her pelvic pain properly diagnosed.

Women are less likely to be diagnosed with and treated for pain than men and when it comes to reproductive health issues, accurate and timely diagnosis are far between for women. On average, in the UK, endometriosis, especially common among women aged 30-40, can take seven and a half years to be diagnosed. The problem worsens as you begin to factor in race, socioeconomic standing and access to quality healthcare.

Delayed diagnosis and misdiagnosis is a common healthcare problem in Nigeria, says Dr Moses Enokela, Founder, SonoCare. He adds that with the state of the sector in the country, there is very little medical facilities and practitioners have to go on in terms of equipment and infrastructure to carry out proper investigation before diagnostic conclusions can be reached.

According to Dr Ifunanya Chinweuba, a Medical Officer at The Good Shepherd Specialist Hospital, much of the challenges with diagnosis she has experienced with her female patients have been based on the fact that many exaggerate their symptoms or come with self-imposed diagnosis which they only hope to confirm and feel dismissed when they are not.

But doctors can also be guilty of this too, particularly around female reproductive health concerns hence dismissing a new case with one or two symptoms similar to the last 10 female patients they consulted with.

While a medical student, Chinweuba recalls she had visited a hospital over abdominal pains.

“The first thing the doctor asked me was if I was pregnant,” she says.

Without listening to her symptoms, conducting physical examination or asking questions he accused her of having commited an abortion, a testy topic in a society where abortions are seen as murderous and obtained illegally.

“But when I started practicing, I almost made an excuse for that doctor,” she says.

“Because if I have ten young women who come in with acute abdominal pain, if you ask them for their last menstrual period and they give you a date, and you send for an ultrasound scan, at least 6 or 7 come back pregnant. About 3 or 4 may have attempted an abortion. Over time, it is easy to cast a blanket expectation on every other woman who comes in.”

Of course, this is not only unethical but dangerous practice as every single patient who enters a consulting room must be treated with the fresh eyes of a unique case with unique symptoms and the expectation of a unique diagnosis.

But in a country like Nigeria, where doctor patient ratio is at 1:5100, consultations durations become a five minute period where a doctor is trying to get you out of their office as quickly as possible so they can trudge on to the end of a long queue before their shift is over if they care enough.

“And this is where the negligence comes in,” Chinweuba explains.

“The way women present their problems is different from the way a man will present his problem,” he says.

“Whichever way it is, it is the responsibility of the doctor to listen whether it is going to take eternity but it is important to listen to get to the root of the problem.”

What can women do?

There are many ways that have been suggested to aid women in getting the quality and attentive care that they need. Sometimes, it means changing doctors or hospitals.

Mirabel* a mother of two recalls an experience at a clinic in Surulere, the Lagos mainland where she had selected to receive treatment under her company’s HMO plan due to its proximity to home.

One doctor in particular who ran shifts alongside a few others, she recalls, had only one diagnosis for every complaint she ever came with: malaria, with anti-malarial prescriptions to follow.  Once she came with itching and discharge, requested for a swab test to be done but was offered an antimicrobial cream instead with no testing done. Another time, she came with palpitations and was asked to rest.

“I wouldn’t say he had a listening ear as a doctor. He made you feel like your complaints were not valid, as if you were unsure of what you were saying,” Mirabel says.

After months of unsatisfactory visits, she started targeting times when another doctor was on call to visit the clinic. The second doctor was helpful. He recommended she run ECG tests at an external laboratory and come back with her results. Apparently, as he explained, there were budget limitations they could not exceed based on her HMO plan and the first doctor who may have supposedly been limited by this in the advice and extent of care he could offer.

Other times, visiting with many doctors do not quicken the arrival at a diagnostic conclusion but being able to clearly communicate your symptoms factually, articulately and without room for doubt, and this is where diagnostics tools and digital apps come in handy.

Simple tools that can help you track symptoms like the Daily Counter app Salaudeen downloaded can go a long way. Period apps and trackers are also a great way to track reproductive health changes over time so that when you come to a doctor, there is clarity and data to back up your complaints. Keeping track of period cycles can be daunting.

In addition to the million and one things you have to do each day as a woman, remembering when last your period came and for how long can be a challenge. Thankfully, there are tons of tools that can help you keep track and generate reports and charts for parameters like body weight, flow intensity, moods or water intake this way, it is clear to see where there are aberrations and for what length of time is enough for it to become a medical concern.

While significantly reducing wait times, for doctors, telemedicine platforms can reduce the stress of having to continuously worry about attending to long queues of patients increasing the time commitment and attention to patients.

“The hospital setting is quite becoming very ineffective,” he says.

A platform that also offers extra earnings in a country where medical doctors earn about US$380 – US$640 per month with delays can boost commitment to offering a more attentive ear.

Enokela says the distance between female patients and doctors communicating over a digital platform can also provide a sense of detached trust that allows for more intimate conversation around symptoms that may be awkward to discuss in person.

Accessible and affordable on-demand pre-diagnostics or diagnostics can also become very critical and helpful especially when doctors are unable to run tests and scans because of access and/or costs. Women are also able to confirm hunches more accurately by carrying out traiges or sending samples directly to the labs perhaps bypassing unending delays from consultation rooms.

“It will also be easier for doctors to recommend them because they know it can be done quickly and contribute towards effective diagnostics,” Enokela says.