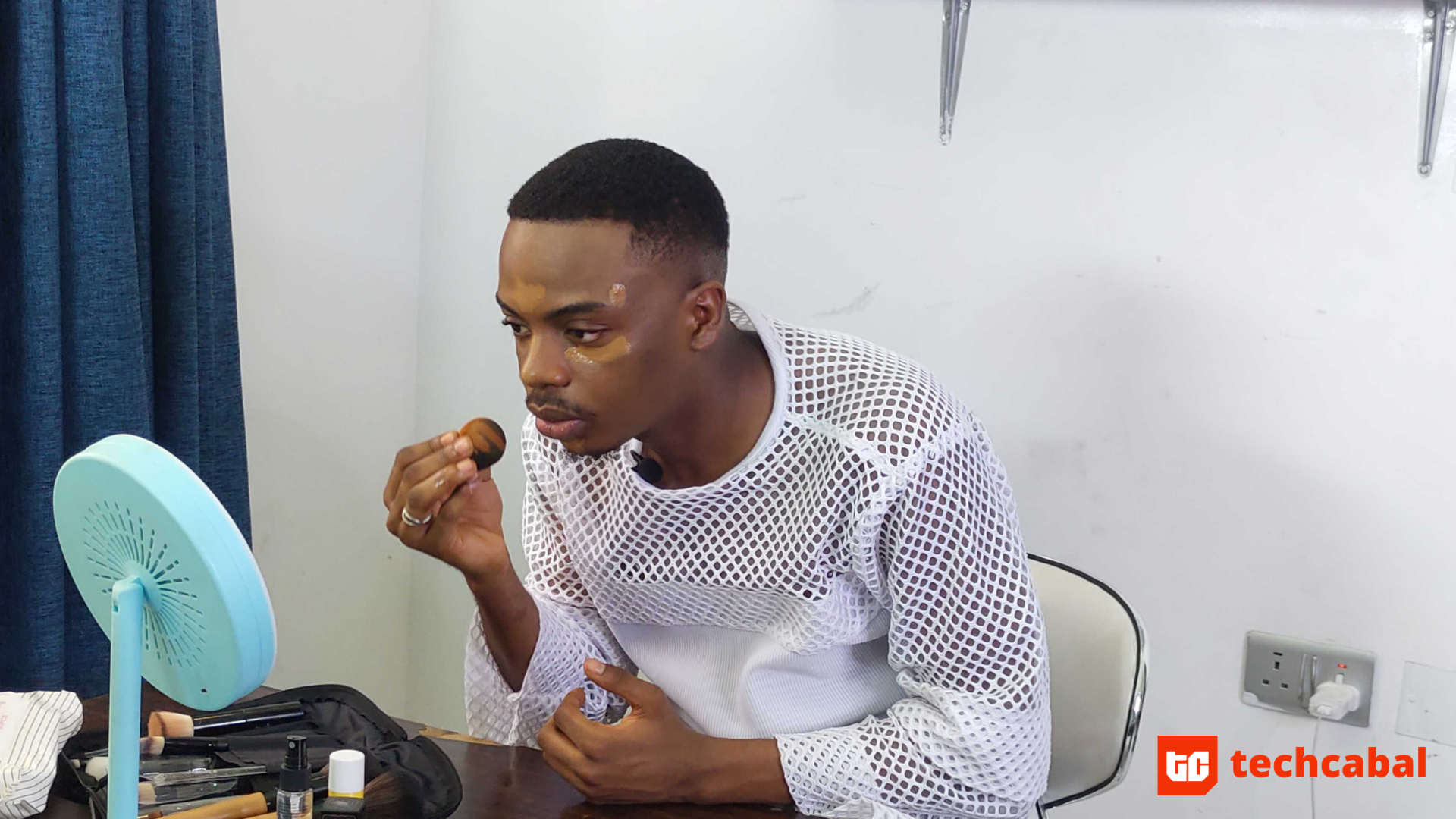 Enioluwa Adeoluwa, getting ready to serve looks on YouTube and the Gram

Seated in the living room of a multi-storey Lagos duplex, I watch my host descend a flight of wood-panelled stairs. He is wearing flip flops and doesn’t have his signature lip gloss on.

A white long sleeve sweatshirt paired with tight grey shorts expresses his casual mood this Sunday morning. Carefree and cheerful, as you would expect of a 21-year old influencer. Up close, his tawny brown skin matches the shade that glows in his videos but besides being taller in person than I imagine, he is… quite ordinary.

We exchange a few pleasantries and go up to his makeshift studio – a square room with a 10ft drawer overflowing with books and magazines, including a 2015 Vanity Fair issue with Taylor Swift on the cover. Simeon, his videographer, rolls the camera and Enioluwa Adeoluwa, the new darling of beauty-obsessed Nigerians on Instagram, takes over.

Beauty Boy. Lip gloss Boy. Adeoluwa doesn’t particularly mind which one he is called. He encourages both, in fact.

He is intentional about shaping his brand. On some weekends like this one, that could mean shooting six videos – a mix of brand endorsements and personal shots – in four hours. “It’s four weeks of work,” he says, to be published mostly on YouTube where he has gained 3,500 subscribers in less than two months.

Of course that is not a large audience for an influencer, which is why he’s investing energy in his looks and plotting guest collaborations that will amplify his relatability and style. His 80,000 Instagram followers and 24,000 TikTok followers will not automatically follow him on YouTube, but he’s in this business for the long haul.

There are no scripts in the room, but he manages to communicate his humour and Gen-Z alté wisdom in single takes. His job comes with its fair share of mild anxieties too: passing trains blaring loudly and throwing off his beauty game. His make-up wouldn’t stay steady because the air conditioner blows hot air. The power is on and off.

But Adeoluwa seems to be having fun shooting these videos. Between takes, he tells me of his surprise at being recognised for his TikTok videos at Pan-Atlantic University (PAU), a private university in Lagos where he’s currently pursuing a Masters degree in Marketing. He likes the prestige of a good education but a second degree wasn’t exactly his choice.

A year after graduating with a first-class degree in Theatre and Media in 2018, he joined Bamboo, the fintech app for buying local and foreign stocks, as a growth analyst.

He loved the job and credits his present financial awareness to his 12 months at the company. The young influencer is also a guy who buys American stocks. Yet, a growth analyst was not his chosen career choice. Last October, with some nudging from his parents, he took up the challenge of gaining higher education.

But his online and in-person classes at PAU are now interfering with his accidental influencer career. In the middle of shooting, he would often tell Simeon to hurry up because he had an assignment due by 5 pm that Sunday evening.

In one of the six videos I watch him record, Adeoluwa speaks candidly about this frustration, with a stainless steel spoon in one hand and the other gesturing at the camera. It’s raw and honest but also realistic; he’s not about to abandon the programme because the fees are expensive and his professor dad and lecturer mum would be disappointed.

But not too disappointed. Both parents have thrown their weights behind his Instagram adventures, sharing his videos and content to their friends. His larger support circle includes friends and a growing army of fans who comment on his infectious Instagram videos.

A cursory investigation of Adeoluwa’s comments sections shows a few musicians (like Ric Hassani), fashion designers (like Bayo Oke-Lawal) and some progenitors of the social media influencer game (Toke Makinwa). More than once, he reminds me that he is young and still trying things out. But there is a hunger in his eyes, a pointed desire to climb the ladder as quickly as possible.

He may be 21 but so is Taooma (real name Maryam Apaokagi), the multi-character Instagram comic who, he says, now commands up to ₦1 million (~ $2,500) for brand campaigns.

Rather than feel pressure, Adeoluwa sees lessons. He’s learned one trick from Taooma; find your niche and polish it to perfection. And so, he’s sticking with beauty.

Expect more lip gloss videos, in Yoruba and English. More tutorials like the one on how to get fake freckles. There’ll be longer-form videos: of him shopping expensively with guests, of tell-alls about his life and eventually in proper feature films as an actor.

Basically, expect no limits. And that’s on period.