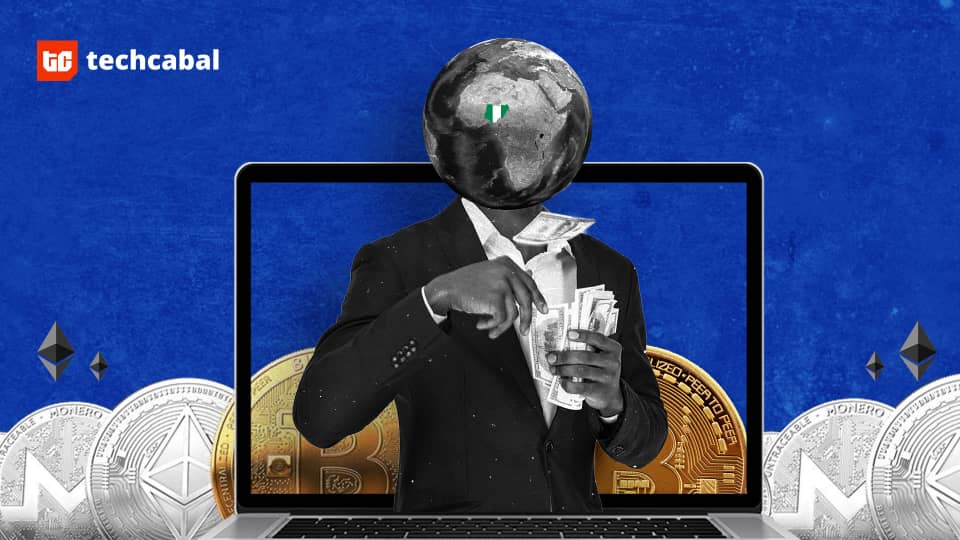 Like most Nigerian workers, Kola*, at his former job, used to be paid his salary in the country’s official currency: the naira—until he started working at a fintech company registered outside Nigeria. Now he gets paid in USD Coin (USDC), a Stablecoin tethered to the US dollar. With this switch in his salary’s currency, Kola was offered a juicy opportunity to exit a quagmire many young Nigerians find themselves in: they make more money than their parents did but in a currency that has fallen so low their paycheck doesn’t reflect in their purchasing power.

Nigeria, like many African countries, grapples with currency risk. Back in 2015, its current president, Muhammadu Buhari, campaigned on a promise to increase the value of the naira. But since the start of his presidency, the country’s currency has plunged badly because demand for the dollar continues to outstrip supply. This plunge in the value of the naira has been majorly fueled by Nigeria importing more goods than it exports. With declining oil prices forcing the Nigerian government to devalue its official currency twice in the past year, and by roughly 35% over the past five years, the resultant inflation has thrown over 7 million people into poverty in 2020 alone, according to the World Bank.

Since saving in naira is a dead plan, more Nigerians now save their earnings in foreign currencies. Data from the Central Bank of Nigeria (CBN) revealed that Nigeria had a total domiciliary account balance of ₦6.566 trillion as of March 2021, and when this figure is converted to dollars at the official rate of ₦410 per dollar, it translates to about $16 billion.

Nigeria’s weak currency has pushed its citizens into saving their money in foreign currencies, for wealth and value preservation. But even this is in limbo because uncertainties rule the country’s financial regulatory climate. Nigeria’s CBN has a long history of clamping down on individuals, groups and companies it suspects of being responsible for the slump in the value of the naira. Out of nowhere, the CBN banned the sale of foreign currencies to bureau de change operators—also called the parallel or black market—in the country, accusing them of creating an artificial foreign exchange scarcity. It also threatened to go after abokiFX, a website that collates the black market foreign exchange rates daily, asserting that there is only one acceptable exchange rate: the Investors’ and Exporters’ FX Window.

This has made a lot of people apprehensive, especially those with funds in their domiciliary accounts. Their fears were heightened after Ibrahim Obanikoro, a member of parliament, suggested in a tweet that the CBN close all domiciliary accounts for the next year.

In addition to saving in foreign currencies, Nigerians have turned to cryptocurrencies—digital currencies that are out of the reach of federal government control.

This newfound hunger for cryptocurrency has seen Nigeria emerge as the leading country, per capita, for Bitcoin and cryptocurrency adoption in the world, according to a report by Statista—despite government crackdown. In fact, the African continent has been the fastest adopter of cryptocurrency in the world. Chainalysis estimates that African countries collectively received around $105.6 billion worth of cryptocurrency between July 2020 and June 2021. For context, sub-Saharan Africa received an estimated $48 billion worth of remittances in 2019, about half of which went to Nigeria, according to a Brookings Institute study. Between July 2019 and June 2020, the volume of cryptocurrencies sent to Africa from outside the continent was the highest of all regions Chainalysis studied. With 96% of the crypto value coming from outside the continent, this suggests that more Africans are receiving remittances via crypto.

Digital money is the future of finance

In February this year, the CBN placed a ban on cryptocurrency in the country when it directed banks to close the accounts of persons or entities involved in cryptocurrency transactions. At the time, the Nigerian apex bank claimed that cryptocurrencies and digital currencies were largely used in terrorism financing and money laundering, citing the anonymity of their transactions.

But months after that, the government, seeing it couldn’t quench the fire of cryptocurrency in the country, bet on digital money as the future by launching a central bank digital currency (CBDCs) named eNaira and nicknamed “Project Giant”.

Digital money like cryptocurrencies, CBDCs and Stablecoins will play a significant role in the future of financial services. Cryptocurrency is gaining worldwide acceptance; Stablecoin, a peculiar type of cryptocurrency, has been labelled the “future of money” by the Harvard Business Review; and all these are in direct competition with CBDCs.

Rest of World reported on how Stablecoins have found a use case in volatile markets like Nigeria, where CBN’s regulations force Nigerians to spend limited amounts of US dollars via their dollar cards each month. In order to bypass this limitation, Nigerians have switched to using Stablecoins to make their payments.

Stablecoins, such as the Tether (USDT), Binance USD (BUSD) and USD Coin (USDC) are a form of cryptocurrency pegged to a traditional asset like the US dollar or gold. In sub-Saharan Africa, Stablecoin remittances can be up to 20 times cheaper than traditional money transfers. USDT and USDC transfer fees are often as low as 0–1%. Paxful, a leading cryptocurrency trading platform in the country, declares that 1.5 million Nigerian users, representing about 5% of the platform’s trading volume, use USDT, the most popular Stablecoin.

There is a growing adoption of Stablecoins like $DAI,  $USDT,  $BUSD and $USDC in Nigeria. Unlike such cryptocurrencies as Bitcoin and Ethereum, which are notorious for their volatility, Stablecoin, like CBDCs, is a non-interest coin. Stablecoins have seen rapid growth this year, with USDC, the second-largest Stablecoin in the world, reaching a market capitalisation of over $30 billion.

Just like Olaf Carlson-Wee, Coinbase’s first employee who was paid entirely in Bitcoin, as far back as 2013, for three years, Nigerians also want to be paid in crypto.

Earlier this year, in July, Timi Ajiboye, CEO and CTO of Helicarrier (formerly Buycoins), announced that the company’s employees would now be paid in USDC. Twitter went agog, with many presenting themselves to Ajiboye for employment at his company.

In a process Kola describes as “seamless” when he receives his salary in USDC, he converts to naira only the amount he plans to spend for the week. “I don’t withdraw my full salary at once because you never know what the exchange rate will be tomorrow. So, even if waiting would add ₦500 to my salary, I’d rather wait than withdraw all at once and have the naira in my account drop in value between when I withdraw it and when I spend it.”

Kola says he can convert his crypto, using his company’s product, a cryptocurrency trading app, within two hours. He is unbothered by persistent news around the steady drop of the naira. He isn’t completely insulated from the naira crash, though, as a Nigerian living in Nigeria. But, he notes: “At least my salary’s value isn’t dropping as fast as it would have if I was earning in naira.”

A colleague of Kola’s, Deji*, who receives his base pay and benefits in USDC as well, reveals that all employees were kept in the loop right from when the company decided that that was the route it would take regarding employee compensation. As a fintech company, there was no need to convince anyone on the team about how Stablecoins would protect them from the steady fall of the naira.

At Kola’s company, individual contract staff, who make up a majority of its workers, are responsible for remitting their taxes. To help the employee with this process, an internal document containing information on tax and pension calculations and payments has been circulated around the company. This is the company battling the challenge that comes with paying employees in crypto, as legal barriers in many countries prevent this. Some of the barriers include the non-recognition of cryptocurrency as a legal tender and the challenge of calculating taxes when employees are paid in cryptocurrency.

For instance, it’s still risky to pay employees in crypto in the US because the currency is recognised by the Inland Revenue Service (IRS) as a property and not a legal tender. A piece of legislation, the Fair Labour Standards Act—a major custodian of employee rights—backs this position. The act states that employees must be paid in “cash or negotiable instrument payable at par”.

While legal systems around the world need more time to develop regulations that cater for crypto adoption, US-based Coinbase announced last week that it is launching a new direct deposit service, “Get paid in crypto,” that will let nearly anyone in the US receive all or part of their wages in cryptocurrencies. There are high hopes for the success of this rollout because if even a fraction of Coinbase’s millions of US customers sign up, the service will contribute, in no small way, to making crypto mainstream in the broader American workforce.

Some countries are already making progress with creating laws that define the payment of workers in cryptocurrency. For example, since 2019, New Zealand has made it legal to receive salaries in cryptocurrency and be taxed accordingly.

But in Nigeria, paying employees in crypto remains illegal. Nigeria’s primary legislation on the relationship between an employer and employees, the Nigerian Labour Act—established in 2004—renders any contract where part or all of a worker’s wages is made payable in another manner apart from legal tender illegal, null and void.

Despite these legal constraints, Nigerian employers in technology startups continue to make smart moves to create value for their employees and the move towards remunerating employees in crypto is one that’s unlikely to go away anytime soon.