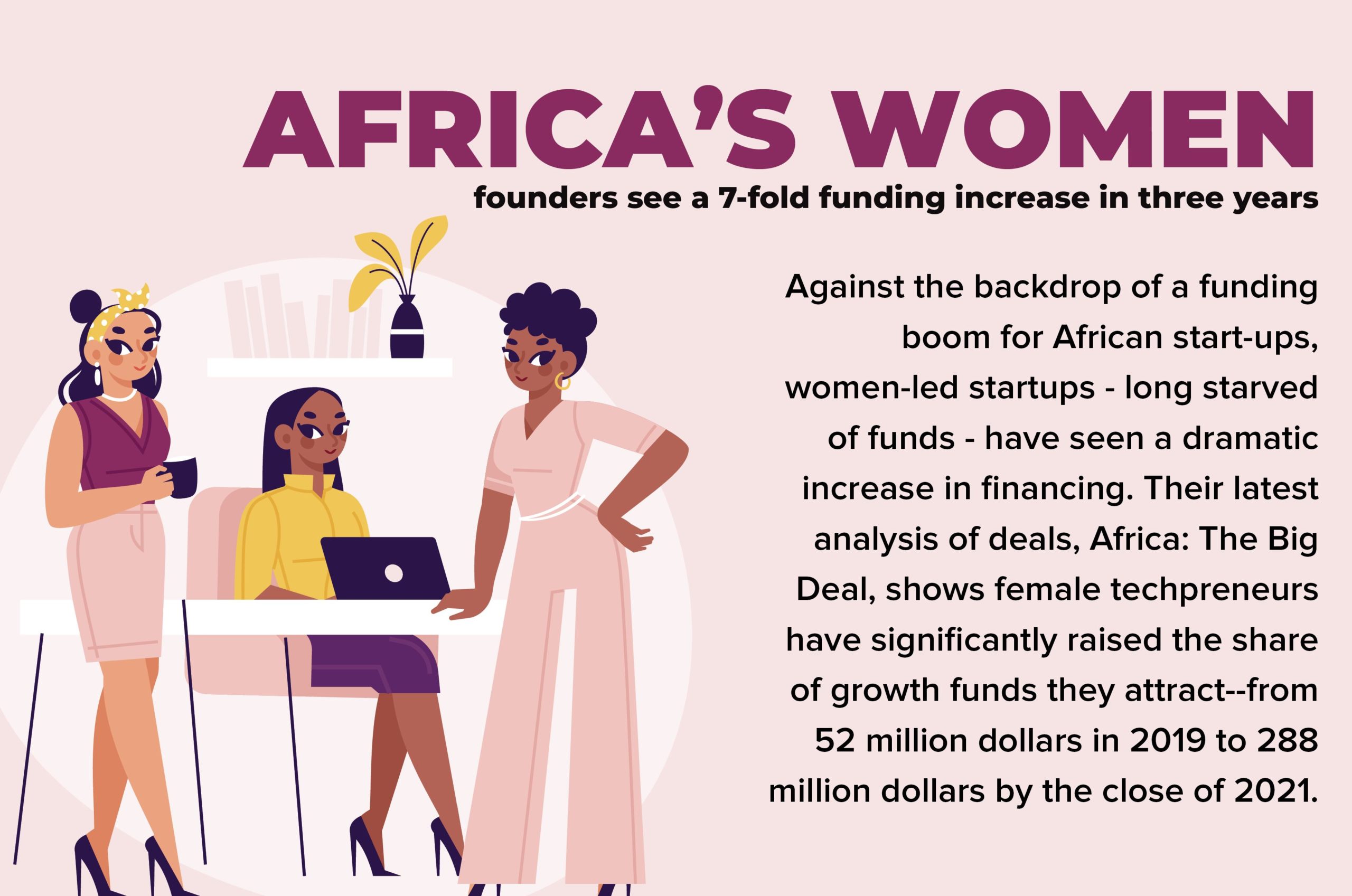 Against the backdrop of a funding boom for African startups, women-led startups – long starved of funds – have seen a dramatic increase in financing. That comes off a low base, so more is needed to level the playing field, especially since a disproportionate number of women own their own businesses in Africa. That’s likely to come.

Investments made into African female-led startups have grown by nearly seven-fold over the last three years, highlighting their potential to haul in investment, the latest analysis shows.

However, the volumes and values are still far lower than what male founders have raised in the continent’s buzzing startup ecosystem.

Their latest analysis of deals, Africa: The Big Deal, shows female techpreneurs have significantly raised the share of growth funds they attract–from 52 million dollars in 2019 to 288 million dollars by the close of 2021.

The share of investments going to female-owned tech start-ups stood at about 6.5 per cent in 2021, meaning that just 1 in every 15 dollars raised in the African start-up ecosystem goes to women-owned tech startups.

“Though incredibly low, it was much higher in 2021 than in previous years, both in relative and absolute terms,” said Africa: The Big Deal analysis.

Kenyan female tech founders continue to attract the most funding in the continent although their overall share has fallen over the last two years.

East Africa’s largest economy now accounts for 41 per cent of all funding raised by female CEOs in Africa, down some 20 per cent since 2019 when it accounted for 61 per cent.

Two-thirds of 408 million dollars was raised by just ten female-led startups over the last three years and half of those start-ups were in Kenya.

Of the ten, South Africa and Nigeria were represented by two startups each, with one from Zimbabwe.

Female CEOs in South Africa and Nigeria have over the last two years improved their fundraising potential –growing 16x and 12x annually, respectively.

Most of these female-owned start-ups are concentrated in non-fintech sectors, which partly explains why they are attracting less funding.

“Women founders more often than not, are usually inclined towards sectors such as healthtech, edutech and sustainable technology which sometimes do not receive large amounts of investment. This can however change if the subsector is under the radius of investment,” said Association of Start-ups and SME Enablers of Kenya (ASSEK) chief executive officer, Mercy Kimalat.

Underlying biases and beliefs by investors that women-driven ventures represent a riskier bet and fewer women in incubation programmes were other factors making it difficult for female founders to attract investments, according to Kimalat.

“Finding women founders enrolling for acceleration programmes is often difficult, they are more inclined toward job security. Not many women are enrolled on programs such as STEM,” she said.

A joint report by World Bank’s Africa Gender Innovation Lab (GIL) and research consultancy firm, Briter Bridges, dubbed, ‘In search of Equity; Exploring Africa’s Gender Cap in Start-up Finance,’ also affirms these sentiments, saying even when they work in sectors with high investor interest, all-female teams are still less likely to receive financing than all-male teams –and they receive smaller amounts, even when they do receive financing.

Female-led start-ups are also less likely to be pitched for equity financing due to low confidence in their ability to pitch to investors on the growth prospects of their ventures. Instead, most of them follow different financing paths, with a preference for bank loans and retained earnings.

“This gap is despite the fact that women entrepreneurs in the sample were more educated, had the same amount of professional experience as male founders, and experienced similar revenue changes in the previous year,” said the report.

But there is some light at the end of the tunnel.

Earlier in the week, Kenya started developing what it termed a dynamic national innovation system to facilitate the commercialisation of startup innovations through the initiation and implementation of appropriate policies, standards and infrastructure that nurture the start-up innovation ecosystem in Kenya.

Through a strategic partnership, between the Kenya National Innovation Agency (KeNIA) and the Association of Startups and SME Enablers of Kenya (ASSEK), capacity building programs will be introduced to facilitate the digitisation of startup operations to enhance service delivery and promote the visibility of their impact to local and international investors.

Kimalat said tailored programs will be designed and implemented to incubate female-led start-ups to ensure they are profitable and investable.

“Some of the key focus areas would be developing the right recruitment strategy to reach the female founders, incorporating female industry mentorship and coaching to ensure support during their business lifecycle and post-program support to help them fundraise as their business evolves,” said Kimalat

In 2021, African startups broke records, attracting over 4 billion US dollars in funding—more than doubling the investments hauled in 2020. That number is set to double again, with women-owned and led startups also likely to see a significant increase in funding.