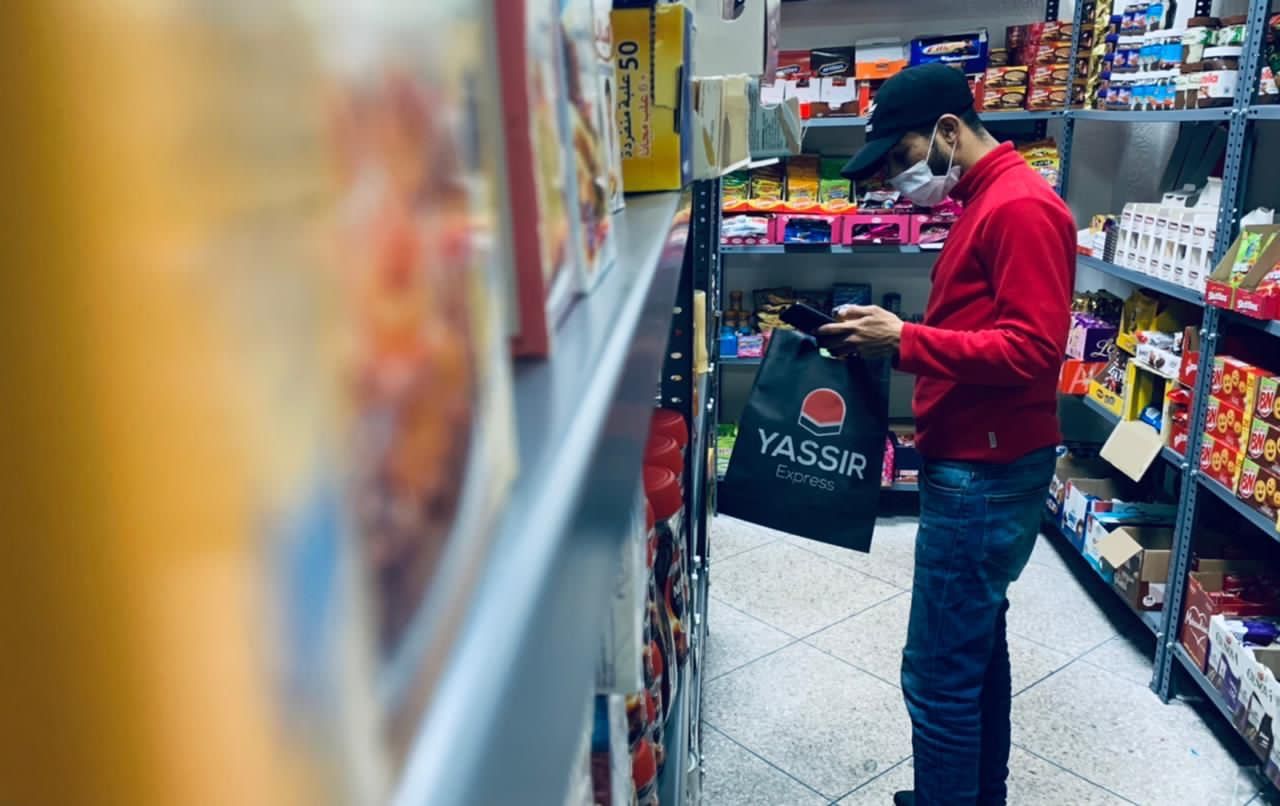 Yassir's employee shopping for groceries to be delivered to users. Image source: Yassir

Silicon Valley-based Algerian entrepreneur Noureddine Tayebi has positioned himself as one of the top tech business leaders in North Africa. His super app startup, Yassir, has raised over $43 million, making it the most funded Series A-stage startup in the Maghreb region. It has over 6 million users and is currently operational in 27 cities across four African countries. But what Tayebi envisioned for the company has only just begun.

Tayebi, like a geeky computer student, appeared on our Google Meet call in a red hoodie, black-framed glasses and silver headphones across his head. It was an early May Monday in Dakar,  Senegal where I was on the day we spoke; the time was  5 PM, and the weather was sunny yet windy. But in Silicon Valley, where Tayebi was joining the call from, the weather was about 17 degrees and chilly.

Behind him were transparent off-white curtains hung in front of a locked aluminium window, and from the curtains, trees, dancing to the tune of what seemed like a mild breeze outside the house, were visible. When Tayebi finally spoke, it was in a pristine American accent; he had lived in the US for 15 years.

“Yassir is also a fintech company,” with a brief smile as he adjusted his glasses, Tayebi answered when I asked to confirm if his company is now a fintech company. “We are building an entire value chain into one app: That has always been the end goal for us.”

Trust: an essential element in building a cashless society

Yassir is bundling a couple of offerings inside a single app. According to the Stanford University alumnus, it’s a super app like hasn’t been seen before, and he said all the mathematics are favouring, at least as of July when we met again in-person in Abidjan. Its ride-hailing and delivery service, Yassir Express, dominance is already established in Algeria, its primary market, and it’s making inroads to replicating that in its other markets—Tunisia, Morocco, and Senegal. Pretty much three out of five on-demand activities in Algeria are through the Yassir app. But its financial inclusion play is the game-changer Tayebi is obviously bullish about.

Backed by some of Europe and Silicon Valley’s finest VCs, including Y Combinator, and top angel investors, Yassir was founded in 2017 to provide on-demand services to Algerians. While Tayebi’s overarching goal has always been to create a seamless financial service that drives a cashless economy, Algeria was not ready for that yet. In fact, most francophone Africans, especially in the Maghreb, were (and still are) skeptical of the banking system, leaving them to be heavily underbanked and unbanked. So Yassir started with ride-hailing then last-mile delivery to court its users and build trust, while teasing them with a glimpse of what was achievable with an efficient digital banking solution. But betting an on-demand business on trust is tricky and requires spot-on effectiveness to meet promises and expectations. Humans are naturally selfish and impatient and want whatever they want immediately. So the trust and loyalty they have for an on-demand business reduces every time they do not receive their wants on time. Yassir, however, with its first-mover advantage, customer-obsessed attention to services, and over 450-person workforce, seems to have built trust in the minds of its users. Now, five years later, it is ready to cash in on its trustworthiness to get its overarching vision of creating inclusive digital financial services that drive a cashless economy well on the way. It is introducing its layers of financial services one after the other—wallet provision being the first.

Today, Yassir’s drivers and dispatch riders are at the forefront of actualising Tayebi’s cashless utopia: They are the ordained evangelist and foot soldiers, preaching and onboarding others—passengers, shoppers, and merchants—onto the app’s digital wallet one trip at a time.

“We use our large network of drivers as mobile agents to collect the cash and transfer it into electronic money. We were working with our merchants to do the same thing. And that’s really like the end game for us,” Tayebi told TechCabal.

This is how it works: at the end of a ride or delivery, users can pay in cash for whatever they order, and then be encouraged by the driver to give additional money, and that money goes into their Yasser wallets. Tayebi said they have created incentives to attract and encourage people to deposit money into their wallet. “Like put money inside your wallet and get discounts on your next ride or food or grocery delivery. Things like that makes the wallet offer attractive,” Tayebi said.

But what’s particularly unique about this business model is its multi-sided marketplace nature. The company is not only targeting consumers, but the entire supply chain— drivers, couriers and merchants. It has even bundled the digitisation of the informal sector into its product. This means that it now connects FMCGs wholesalers and distributors, and other manufacturers or producers directly to its merchants. Think of a Wasoko as a feature in a super app.

Tayebi is indeed building an entire ecosystem into an app. Before coming back to Algeria, the country he left 20 years ago for grad school, Tayebi had spent a long stint at Intel, the American semiconductor manufacturing giant. He had also co-founded and exited his first startup, InSense. Tayebi has a PhD in electrical engineering from Stanford and has experienced the university’s  way of building world-class business leaders, one of which  was being a major contributor to a small startup community that would become the great Silicon Valley. He wanted to share some of that  knowledge and help build world-class African founders and a thriving tech ecosystem. But after providing advisory for entrepreneurs, he quickly realised that while lack of funding and hostile bureaucracy is said to be an impediment to scaling companies in the Maghreb, unmotivated founders were equally more of a problem. So he decided to build an actual tech-driven business other founders could learn from, firsthand. And he has done that by building one of the most valuable Series-A startups in North Africa. The company is about to close a Series B round.

Now, besides its obvious product expansion plan, the company wanted to accelerate its market expansion. There is insider information that the company had moved to acquire its closest francophone competitor Gozem, but the Togolese super app founders were not interested in selling. The super app, however, launched in Senegal this April, and will launch in four more francophone West African countries. Tayebi did not mention the countries but said its Senegalese operation would direct its sub-Saharan expansion. The current macroeconomic trend is likely going to delay its expansion plan, as we have seen with other startups on the continent.

Per the layers of financial services the company wants to build on its wallet infrastructure, the first one is—depending on when a critical mass of users willing to put their money in the wallet is achieved—extending P2P transfers (sending and receiving the money to and from your family and friends). This can also be used to pay merchants who have a Yassir wallet account, meaning users can shop or eat in their favourite store or restaurant and pay through their wallet.

The third phase of the cashless revolution is getting into core payment gateways. Think of Paystack or Flutterwave but with a super app. The fourth stage, Tayebi said, is to build on all the data gathered from the on-demand services, wallet balance, and P2P transaction activities, to create some sort of credit scoring tool, and then leverage it to offer multiple lending services like buy-now-pay-later and instant micro-loans to  the customers, drivers, and the merchants.

Super bank or a super app?

At this point, Tayebi was sounding like he’s building a super bank instead. But he told TechCabal that they are barely scratching the surface. Of course they are considering that the company currently has over 6 million users in an addressable market of about 150 million people spread across 21 francophone African countries.

The goal of a super app is to be sticky and become a can’t-do-without product, but it needs massive numbers of users to really scale. While this is not a manual, judging from the fact that the world’s biggest super app, China’s WeChat, only began to actualise its super ambition when it crossed the 200 million user mark, one could argue that mass users is a yardstick to a super app reputation. Today, WeChat, with over 1.2 billion users, has become an essential part of its users lives, offering them everything including streaming services. But unlike most common African attempts at a super app which normally start with on-demand services or fintech, WeChat started as a messaging app. However, Africa is making its own track at super apps. Startups like Togolese Gozem, Ugandan SafeBoda, Nigerian Opay, and Kenyan M-pesa are in the fray of building a sticky and addictive app. And what they are mostly banking on, especially in the case of M-pesa is the mass they have achieved with their core offering. But other than the initial mass acquired from its on-demand vertical, Tayebi is banking more on trust—which he believes is critical yet rare in the African business landscape—to scale, reach critical mass, and build a leading francophone African super app.