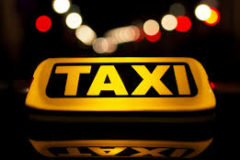 Ekocab, a ride hailing platform which wants to help commuters find yellow taxis in Lagos has launched in Lagos in partnership with the government