Before you open Angry Birds or Candy Crush next time, remember that Africa is chock full of talented mobile app and game developers, so relax with an indigenous game; here are ten mobile games made by Africans, for Africans. Mind Dead  is a 3D role playing zombie shooter game set in a research facility in Lagos state following the outbreak of an infection in a deserted oil producing community in Bayelsa State. Think of an African World War Z. Mind Dead is a product of  GbrosSoft, a Mobile App (Games) development Company that creates games set in Africa, and is currently available in the Windows Phone store and Google play store, the team is still working on the iPhone/iPad and PC versions. This Pledge 51 mobile game starts with a Lagos map of bus routes to be conquered, has a garage for tune ups and upgrades, as well as an online social platform called Chop Up, which allows players interact based on in-game achievements. It is available on the Nokia Store and Blackberry World. The android version is still pending. The True Ananse, is about Kweku Ananse, and is created by Leti Arts, the first instalment of a larger Africa Legends series is a contemporary reimagining of the ancient tale of the African trickster god that are said to originate from the Ashanti culture in Ghana, and is filled with spandex-wearing, visored African superheroes. The game and comic series is available on Android via Google Play and via direct download for Java devices. Windows Phone, Nokia and iOS versions are said to be on the way. Titi Tilapia for Android is a 2D side-scrolling adventure game where you play as Titi, a mothering fish who gets home to discover that her eggs are missing, taken by Okoro, the evil octopus. You help Titi in gathering eggs underwater (with the help of her friends). Titi Tilapia was built by the Nigerian developers and designers at Sonbim Games. It is available on the Nexva App Store from your mobile device. 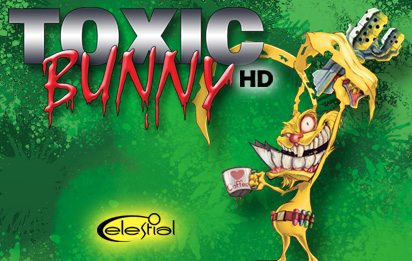 Celestial Games has come a far way with their coffee-crazed bunny. Toxic Bunny is an almost normal rabbit that gets into a really bad mood and tries to find the person responsible for interrupting his coffee break. It is the gamified illustration of what would happen Looney Toons & Monty Python were heavily armed and thrown into a blender with 90s movies. It is available for Android devices.

Ma Hauchi is pretty simply game to play; however, it is pretty addictive. You play as a Nigerian Hunter, who has been tasked to bring down as many vultures as you can with you bow and arrow. Simple, addictive and well designed. Lagos-based development studio, Kuluya has over 100 mobile games under their belt; however, Ma Hauchi is a Java game.

By Luma Arcade, Bladeslinger is a fast-paced third-person action brawler for high-end Android and iOS mobile and tablet devices where players must defeat multiple enemies, in the fictional town of Hammer’s Peak, at once in both ranged and close combat.

Orisha, for Windows Phone, has been developed by Lagos-based developer, Gamesole. Orisha is a game that is aimed at casual players; however, it can become extremely addictive. The game features a variety of levels as well as colourful and attractive graphics. While it is not the most in-depth game out there, it is a great way to kill time.

Dark Project has been brought to life for Android devices by Dark Faction Games. Play as a star trooper who has been sent to investigate the disappearance of a research team sent to the planet Deltora in order to determine the possibility of the planet being inhabitable. Upon you’re arrival, you soon learn that something has gone horribly wrong, and need to face the darkness equipped with a variety of weapons as well as your trusty flashlight and search for the team fighting off mutants and zombies.