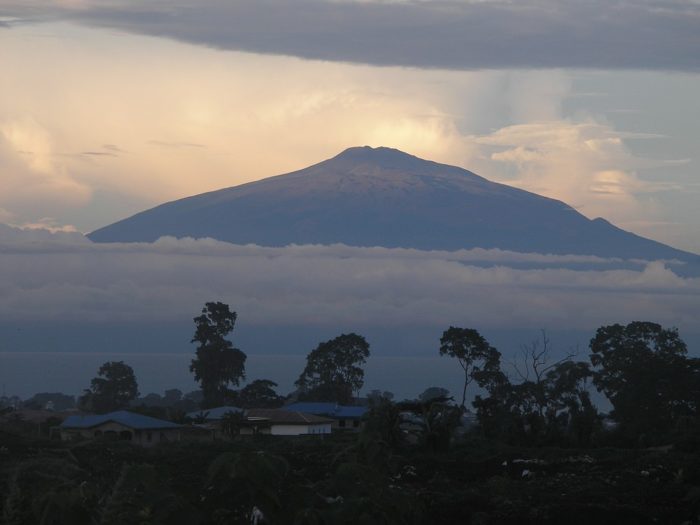 Buea, a town on the slopes of Mountain Cameroon, about an hour from Douala (the economic capital of Cameroon) has become known as Cameroon’s startup capital, called Silicon Mountain. The town located in the South West Region is home to the first anglophone university in Cameroon, the University of Buea. The university is a central element in the town’s journey to becoming Cameroon’s most prominent technology hub.
The history of Silicon Mountain dates back to 2006 when a group of young people which included Churchill Nanje Mambe (Founder, Njorku), Fua Tse (Founder, Zinger Systems), Tata Cyril, among others developed a website called PassGCE. Many of them had met at the University of Buea and cyber cafes around town. The website served as an online community for students and examiners to help the former pass GCE exams. The website was initially publishing GCE results online for free which a good number of people across Anglophone Cameroon liked. The government however kicked against it and asked that the website be shut down. The team of young people who founded PassGCE then went on to start the Afrovision Group (led by Churchill Nanje Mambe) to provide web development services to local businesses. “Before Silicon Mountain, Cameroon never had a thriving group of young tech innovators” said Sama Tanya (Founder, Bequadi).
Although the term Silicon Mountain became popular when Rebecca Enonchong used it publicly at a Barcamp Conference in 2013, ecosystem members were informally using the term to refer to the community. The name Silicon Mountain was used in this VC4Africa Meetup video in 2011. The community has experienced two internet shutdowns, regional conflict and other challenges but it has remained resilient in spite of it all.

Early Days
Between 2006 – 2008, a number of young Cameroonians were attracted to the country’s only English speaking university at the time, the University of Buea. This then meant that some of the country’s best minds were moving to the Buea region. It was during this period that ecosystem players like Mambe Nanje, Colong Valery, Tse Fua, Otto Akama among others moved to Buea. Asides PassGCE and later AfroVision Group, a tech incubator LimbeLabs was founded at around the same period which was a precursor to ActivSpaces one of the leading tech hubs in the country. ActivSpaces was launched in 2009 by Ebot Tabi, Bill Zimmerman, Valery Colong, Otto Akama and Fua Tse. The hub currently has Rebecca Enonchong as Chairman. Other people ecosystem players traced the history of Silicon Mountain to include Fritz Ekwoge (Founder, FeePerfect), Al Banda, Benyella Njeko, Efeme Samuel among others. 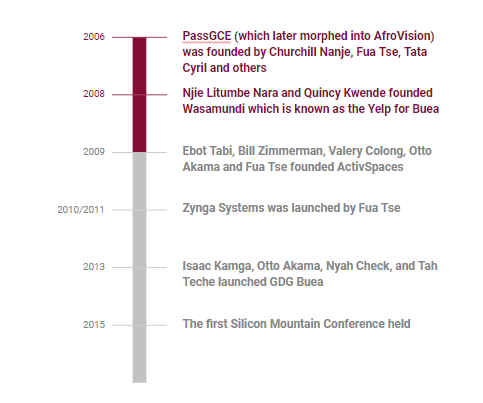 A Timeline of Silicon Mountain’s History

Many of the students in the University of Buea (UB) were inspired by the founders of AfroVision Group to take up a career in programming and software development. An example is Nyah Check one of the founders of GDG Buea who dropped out of his Biochemistry programme at UB to focus on coding. He later re-enrolled at UB for a degree in Computer Engineering. Many of these students didn’t have computers at home but were intrigued by the internet and software. They had to go the cyber cafes to access a computer and learn how to code. According to Otto Akama (MD, Makonjo Media), “In 2007, I was enrolled in the University of Buea to read Mathematics and Computer Science. We mostly did Computer Science on Paper. However, I heard that some Computer Science students a year ahead of us actually wrote real code on their desktop computers, the best of them all was Fua Tse. I wanted to be like him so I began investigating all those who could write code in town so that I could find a place to learn”. “We mostly used cyber cafes to learn. Most of us gave free hardware and software services to the cyber cafe in exchange for free internet time” Otto Akama added.
GDG Buea was launched in 2013 by Isaac Kamga, Otto Akama, Nyah Check and Tah Teche which was one of the groups that helped to grow the tech ecosystem within the University of Buea and across the wider anglophone community in Cameroon. The first Silicon Mountain Conference was held in 2015 with the theme “Let’s Build Products” as a way to formalize the developer ecosystem and bring the players in the startup community together.

Resilience
In January 2017, the internet was shut down in Anglophone Cameroon due to protests against the largely-francophone central government. The shutdown was the first ever in the country and then there was a second shutdown in October 2017 which lasted well into early 2018. The shutdowns had negative effects on tech startups in the Buea region with some of them having to close shop and some others moving to other parts of the country to work. For example Churchill Nanje Mambe had to move to Douala briefly to work out of an hotel during one of the shutdowns. To further confirm this, Otto Akama told me via email, “During the internet shutdown, many of us moved to different towns like Douala and Yaounde. Personally, I tried both cities.”
Despite these shutdowns, the ecosystem keeps bouncing back. “We love Buea. At times I see it as we have a comfort zone in Buea, which is a bad thing. But again, it’s due to the lack of trying to leave. We leave and come back” Otto Akama told me. He further stated, “….. I realized that I loved Buea a little more than I loved the Internet. So we came back and began brainstorming on how to solve the internet problem rather than escaping from it. These sessions even led Zuo Bruno to invent a technology that tracks cars with SMS. So, our resilience comes from the love of Buea as a place and from the rich engagements we have built in previous years”.
Clearly, an undying passion for technology, a love for the town and the connections community members have built have all contributed to the resilience of Silicon Mountain. “It’s the passion community members have for programming and startups. Growing up in the oppressive Biya regime developed some form of resilience in the people and the Internet shutdowns on the English speaking regions strengthens our resolve to keep moving forward,” Nyah Check told me.

What Makes Buea So Attractive To Startups?
Majority of the ecosystem players I contacted pointed to the University of Buea as one of the elements that makes the town attractive to startup founders. According to Churchill Nanje Mambe , “A lot of teenagers come here for studies and this creates a thriving environment for experimentation, innovation and risk taking”. There’s also the fact that Buea is just one hour away from the country’s economic capital Douala which has the largest seaport and the international airport. It also seems that programmers prefer Buea because it is a small but quiet town which is a conducive environment for coding. The small size of the town makes it easy to meet and connect with people. There’s also considerably light traffic congestion which makes it easy to move around town very quickly. The proximity of Buea to Mountain Cameroon makes the town very chilly and cold making the weather conducive for startup founders and their employees.

The Future
Anglophone Cameroon which includes the Southwest region has been making international headlines lately due to the conflict between state security forces and armed separatist groups. Separatists are of the opinion that they have been marginalised and discriminated against by the predominantly Francophone government. This conflict is a major concern to members of Silicon Mountain. The issue has made long-term planning difficult for some founders. It has also made it difficult to hire talent as people are trying to avoid the conflict in the region. On the other hand, Otto Akama told me, “This situation is forcing me to expand faster than I planned to new locations. Maybe this pressure is a good thing”.
There was also a very recent situation where some offices, including ActivSpaces, were sealed in the Buea region by the Mayor of Buea Council. Although it has now been resolved as the Governor directed the Mayor to discontinue sealing officers. There are concerns that such situations may reoccur and this could disrupt businesses however, the Governor’s directive appears to have given some respite concerning the issue.
The future of the ecosystem partly depends on the political resolution of the current struggle for an independent state by the anglophone region. Safety and security is one of the major concerns on the mind of many players in Silicon Mountain. Funding for startups also remains an issue. According to Churchill Nanje Mambe, “… The Silicon mountain community has amazing people, teams and businesses but the major thing lacking in it now is venture capital. This will further help develop the human capital and hence the businesses.”
Despite the challenges it has come in contact with, Silicon Mountain has remained resilient and would probably remain so in the coming years. Ecosystem players like Otto Isong (Founder, AkwaJobs) remain positive about its future, “Every ecosystem needs three main components for survival and growth – market, capital and talent. At Silicon Mountain, though we start building for local markets, we mostly see our products expanding to the rest of Africa. So Africa is our market. We have a strategic advantage for that. On the side of capital, 2019 will come with good news for us, so we will be at a good standing on that end”.