The Economic Impact Of Recent Internet Shutdowns In Africa 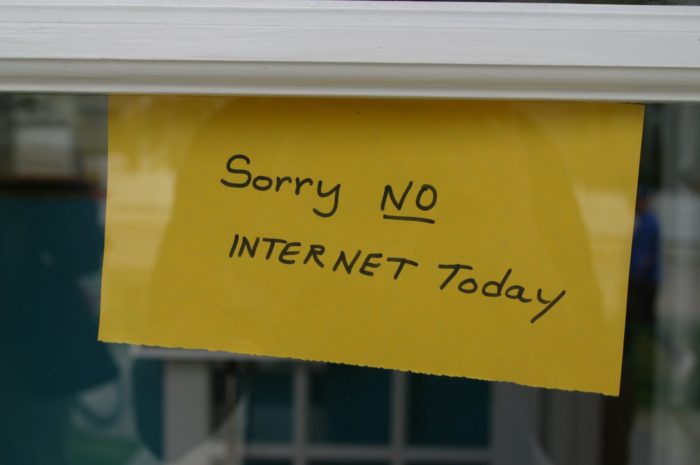 Internet shutdowns in Africa are becoming a source of concern for those passionate about the continent’s digital economy. The latest of such shutdowns is Ethiopia where authorities have blocked access in the eastern part of the country. Keep It On, an alliance of organizations working to ensure the internet stays on, in a letter to Prime Minister Abiy Ahmed, has estimated that the shutdown is costing the country about $32,544 daily in direct economic costs. Before this, there was another shutdown in Ethiopia in 2017.

In 2016, The Brookings Institution estimated that internet shutdowns cost the global economy about $2.4 billion in GDP between July 2015 – June 2016. According to CIPESA, internet and social media shutdowns have cost Sub-Saharan African countries an estimated US$ 237 million between 2015 and 2017. We take a look at exactly how much some of the prominent internet shutdowns between 2015 – 2018 have cost African economies based on the report by CIPESA and information from AccessNow. 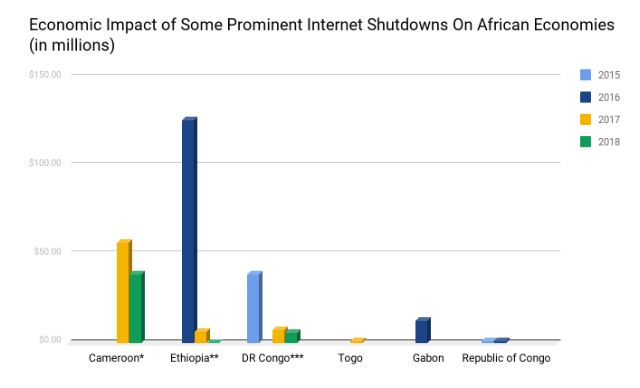 Cameroon has two of the longest internet shutdowns in Africa. In 2017, the anglophone regions experienced about 93 days of blockage between January 17 – April 20, 2017. The shutdown which happened after protests against political and economic discrimination by the largely French-led government cost the country about $38,853,122 for the 93 days according to CIPESA. The latest shutdown in the country lasted between October 2017 and ended on March 1, 2018, a total of 136 days. The shutdown is estimated to cost the country about $56,817,469 for the number of days it lasted although some residents were able to access the internet using VPN.

Ethiopia (2016, 2017, 2018)
The Ethiopian government shut down the internet and social media access several times in 2016. This was due to protests in both the Amhara and Oromia regions of the country. In 2017 the internet was also shut down for a couple of days in order to stop cheats from posting exam papers on social media in the country’s nationwide high school exams. The first shutdown which lasted for 36 days in 2016 cost the country about $125,990,676. The 7-day shutdown in 2017 cost the country $6,124,547. The latest shutdown this year which has lasted for about 6 days with no update yet on its restoration has so far cost the country a total of $195,000 in direct economic income.

Following plans by Togo’s opposition coalition to hold protests, the internet was shut down for five days between September 11 – 17, 2017. The shutdown cost the economy about  $1,217,535.

Opposition supporters took to the streets after President Ali Bongo was announced winner of the presidential elections in 2016. The internet was totally shut down in the country before access was partially restored. Social media remained blocked and there was an internet curfew between 6pm to 6am. The shutdown lasted for a total of 18 days between August 31 and September 18. The shutdown cost the country about $12,789,279.

Between 2015 and 2016 there were two internet shutdowns in the Republic of Congo. The shutdowns which lasted for 3 and 2 days respectively, cost the economy a total of $2,167,630.

Internet shutdowns have negative effects not just for businesses but for a nation’s economy as a whole. A 2016 Deloitte report (for Facebook) identifies six major areas where shutdowns affect the economy as follows; labour/capital productivity, information/transaction costs, access to new markets, financial access, entrepreneurship & innovation and skills & specialization. Africa’s frail economies cannot continue to suffer internet shutdowns. They are just way too expensive from an economic standpoint.

*Cameroon – The economic cost used for the Oct. 2017 – Mar 2018 did not take in consideration that some residents used VPN to access the internet.

**Ethiopia – It appears shutdown is still ongoing so final cost cannot be determined.

***DR Congo – The cost of the shutdown reported to have occured in Aug. 2017 was not included.