My Life In Tech: In Obi Ozor’s world, audacity is king 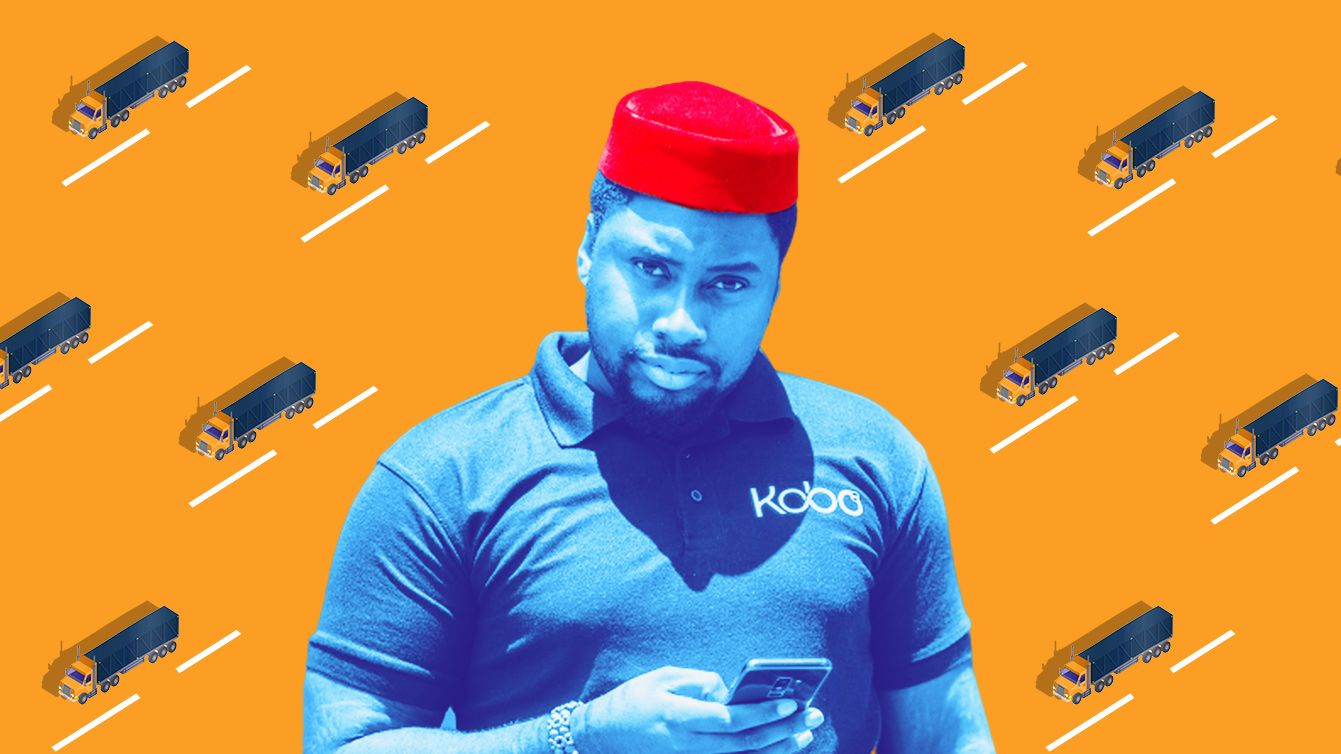 Obi Ozor may or may not be a red cap chief but his company, Kobo360, in just under two years, has become one of the leading technology logistics service providers across Africa. The last of eight children, Ozor was studying to become a Catholic priest at the Sacred Heart Seminary School, Nsude in southeast Nigeria when a protracted kidney disease cut short his priestly ambition and kept him in bed for nine months.

That period, he says, changed his life.

“When I had [the] kidney disease and I was lying at UNTH [University of Nigeria Teaching Hospital], Enugu for nine months, I prayed to God; will there ever be a time I can actually walk? And I don’t think I’m going to die?”

A life-threatening illness and five years of Seminary School came with its habits. At Kobo360’s Yaba office, by a window overlooking an interlinking bridge along the Ojuelegba expressway, he takes off his red cap briefly, makes the sign of the cross and says a silent prayer before we begin what will be a long chat, not just about the company’s giant strides in the past year but about where he hopes to take the company in the coming years.

One thing that strikes you about the man Ozor after you’ve spoken with him for even a few minutes is this: there is nothing tame about how he approaches life and business.

Before pivoting to what is now Kobo360, co-founder Ife Oyedele tells me the company, in its first year, was building a logistics marketplace for the e-commerce sector that was then blooming when himself and Ozor returned to the country.

“We met at the University of Michigan. His wife was friends with my sister and she kept talking about this friend whose husband was very smart, that we would get along because we were always talking about business,” Oyedele says.

They eventually met, becoming friends and business partners shipping baby soap and diapers from the US to Nigeria. Oyedele would quit an ongoing Masters in Management Information Systems to return to the country just around the time Ozor joined Uber Nigeria as its Director of Operations and was building a new home with his wife and child. This was in 2015. The coordinated move hadn’t been planned.

“He’s the yin to my yang,” says Ozor. Both share the same zest for business and the ability to go all in or not at all.

The state of Nigeria’s logistics sector is something of a twisted fairytale; impossible to believe and with no happy ending in sight. With six seaports spread across the west and south of the country, the ports in Apapa and Tin Can are vital gateways for Nigeria’s imports and exports but over the years, have been operating at less than maximum capacity due to inefficiencies and bottlenecks. According to Ozor, it takes twice as much time and cost it takes to ship goods from the US to Nigeria to move goods from one end of the country to the other, a discovery he made shipping goods from the US.

Kobo360’s multi-pronged solution is to connect truck owners and drivers with small, medium or large scale businesses who need to move their goods timely and safely. There’s real-time tracking, digital waybill, insurance, and reverse logistics on offer for both drivers and clients. Kobo360 has since launched in Ghana, Kenya, Togo and moved US$2 billion worth of goods in its two years of operation. In Nigeria, its client base includes heavyweight FMCG companies including Dangote, Unilever, Olam, LaFarge, DHL, Honeywells and Flour Mills.

Nigeria is by far its most challenging market, Ozor said during the TechCabal Mobility Townhall in September. Last year, Togo overtook Lagos’ Apapa port as the leading container port in West Africa having expanded its traffic by more than threefold since 2013. Kenya’s Mombasa port, following recent expansion and reforms, has increased traffic by 6.3% in the last eleven months. Ghana’s main seaport, Tema, in July completed the first phase of an expansion project. It will be able to handle ships carrying up to 18,000 containers and provide an extra 400,000 jobs along the value chain.

“In terms of infrastructure, no major infrastructure has come into place since that [Apapa] port was built,” says Oyedele. Nonetheless, in spite of these infrastructure deficits and inefficiencies, Kobo has succeeded in creating technology tools and IoT systems to ease the processes for cargo owners.

“Last month [September], we grew by 51% and we want to repeat that this month,” Ozor says.

Call it pride or simply knowing your place and staying grounded in it, Ozor insists there isn’t any startup in Nigeria save a handful, pulling in the revenues Kobo360 does and his dreams of growth and success remain audacious. Having closed a $30 million series A fund this year, Ozor says his goal is to multiply Kobo’s growth fivefold before they consider a series B round which he hopes will sprint the company to unicorn status. In spite of hesitation and doubts around this goal, he is dogged in the belief that it can happen, that it will happen.

“One of the key things I learned in the seminary is discipline,” Ozor says, alongside grit, unflinching perseverance and staying power, values which have contributed greatly to not only birthing and growing Kobo360 but has shaped much of its work culture.

“Teamwork is not a problem here. ‘No ifs, no buts, get the job done’, that is our culture,” Ozor emphasises. While he does not credit himself for hard work, he agrees that his strongest suits are prioritising and possessing laser focus.

“I never do two things in my life at a time. Everything is always going to look important and urgent and I’ve learnt in my life that everything is not urgent.” Except it concerns projects he has on hand to grow Kobo’s operations or improve driver welfare which he is very particular about.

In Nigeria, truck owners and drivers ply hazardous routes in a bid to transport goods from one part of the country to the other. With no insurance, they are usually at the mercy of bandits, terrible pay and cargoes prone to theft or accidents.

“Big multinationals bully truck drivers,” says Ozor. “They want new trucks [to transport their goods] but are unwilling to pay premiums to deliver their goods and so the truck owners are unable to maintain them or buy new ones.”

There are a number of projects already in place and more in the works for Kobo’s drivers and truck owners. There is Kobo Care, which offers benefits like truck maintenance, diesel refill and family health insurance packages for drivers. The company is also spreading KOPay hubs which it is piloting in northern Nigeria and will launch in Ghana and Kenya next with a N1 billion working capital facility in partnership with the United Bank of Africa. The KOPay hubs are targeted at being one-stop service and information centers for drivers for concerns, questions, trainings and capital intensive needs required to move cargo. Plans are also in the works for a hire-purchase project for truck drivers which will allow them to increase profitability and become their own bosses.

A beacon of hope

For Ozor, it is paramount for Kobo360 to win because it portends hope and optimism for the technology sector in Nigeria and Africa. But he is of the opinion that startups in the sector, especially in Nigeria, need to be bolder and more willing to “do the hard things”.

“The Nigerian character is bold but when it comes to taking action we don’t. We need to stop chickening out when it matters most.” Startups, by their nature, should be big bold bets.

Proximity is another grouse he holds against the sector. Especially of concern is what many now call the Lagos bubble, the idea that a largely adopted product or technology in Lagos is a win for technology across the country. But you only need to journey to the outskirts of Lagos towards western Oyo or eastern Enugu before you understand what his annoyance is.

“I invited some founders to come to my house in Kano. They laughed and said, ‘Obi, this is madness.’ And these are the people in financial services who need to solve the unbanked problem” which he says is prevalent in the north. Last year, Ozor spent 12 months in Kano with his family largely to understand the operations of truck owners and drivers in Nigeria as a bulk of the traffic at the ports end up there.

“There is a difference when a founder and innovator goes to see the problem firsthand. It’s like a drug.”

It is for this reason Ozor has selected a strategic new space from where Kobo360 will run its operations in the near future. A 9-story tower in Costain, the floors the company will occupy will bring the entire port city of Apapa into full view.

Kobo360’s grand plan in the near future is to buy off the Nigerian Railway Corporation, “because we think it’ll be sold.” A planned public-private partnership with General Electric fell through last year over the terms of the partnership but this signals where the government’s head is at with regards to the railways, Ozor says.

Ultimately, the journey has not been all pleasant but there is no slowing down.