My Life In Tech: Olubayo Adekanmbi is using his privilege to change the world 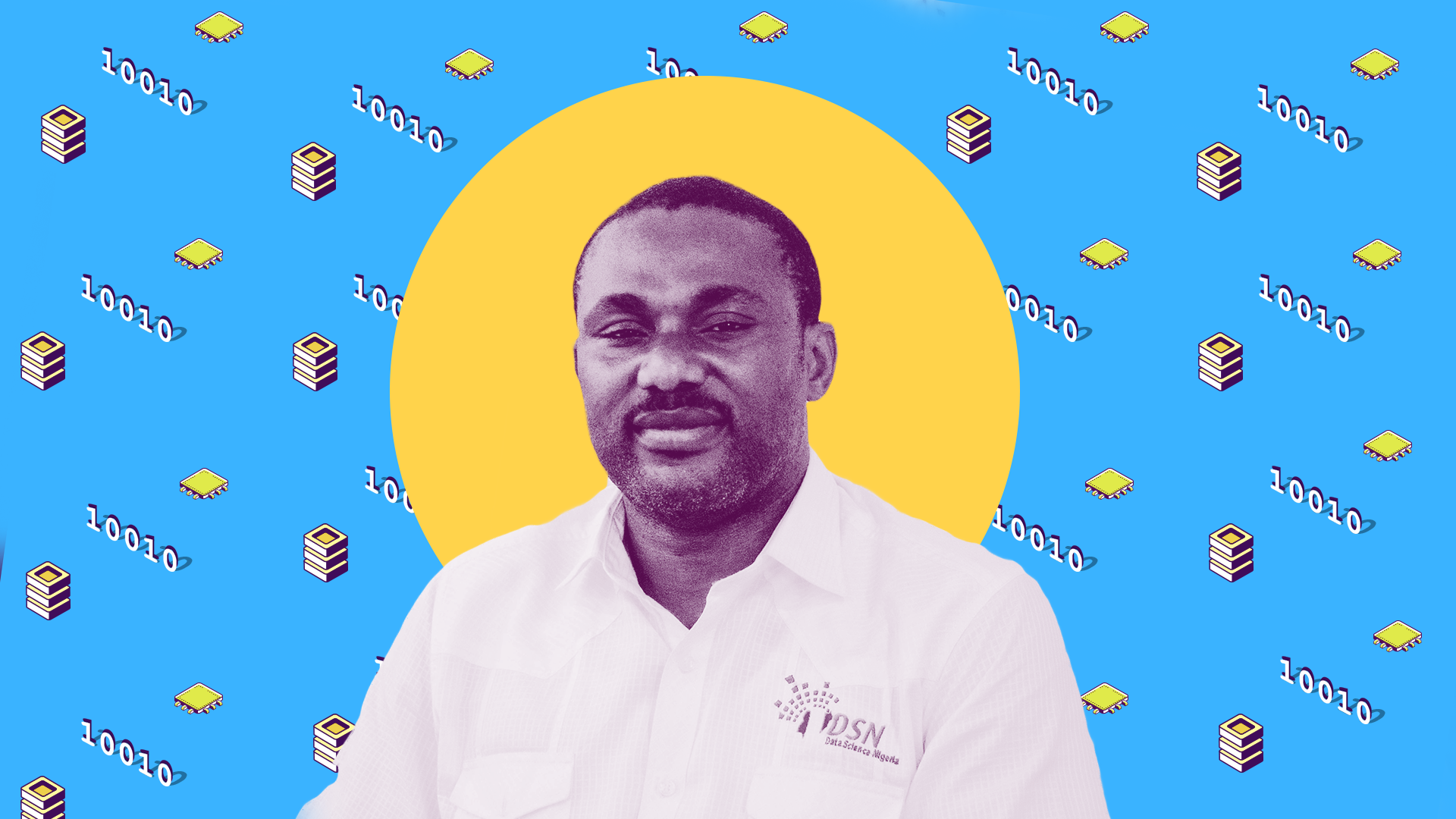 Dr. Olubayo Adekanmbi meets me with a big smile and wastes no time in getting into the vision of Data Science Nigeria (DSN) when we meet at the organisation’s office in Yaba, Lagos Nigeria.

“We have a very big vision; to raise 1 million AI talents in 10 years,” he said matter-of-factly.

The US-registered not-for-profit was established in December 2016 and has developed a holistic approach to tackling the lack of talent and research in the field of Artificial Intelligence and Machine Learning in Nigeria and across the continent.

DSN employs a segmented model that caters to six categories of individuals: beginners, kids & teens, intermediates, university students, professional, C-level executives & government agencies. Its programmes, learning materials and training techniques are tailored to fit the needs of each of these segments and there are a range of materials and sources to choose from.

“We have a book which has been downloaded over 500,000 times across the world,” he says.

The book, Artificial Intelligence Simplified,  details everyday use of AI in a bid to bring the idea of this advanced technology closer to home for beginners and enthusiasts. The book was written in collaboration with researchers from across the globe including Prof. Yoshua Bengio, Head of the Montreal Institute for Learning Algorithms (MILA), whose work on the book gave it a stamp of approval, Adekanmbi says.

The organisation also produces offline content called AI Knowledge Box. The AI Knowledge Box is a 2 Terabyte hard drive with more than 10,000 AI classes taught at the upper echelon of universities across the globe, from Cambridge to Oxford and MIT, in video formats.

“So the problem of, ‘I don’t have access to Internet’, we simplify it,” he says.

Each box costs US$80 and three months’ worth of work sourcing for and categorising videos to make. They are also distributed freely.

“This is the only way we can address knowledge because we don’t have a lot of AI experts [on the continent],” Adekanmbi admits.

There are also classes held weekly under its AI Everyday program and although I am visiting on a Friday, classes aren’t holding as they have been placed on hold in preparation for the organisation’s annual boot camp.

“Everyone that matters in AI from across the globe” gathers for the fully-residential, fully-funded and highly competitive bootcamp which runs for a week at the Peninsula Resort in Ajah, Lagos.

“This year we are looking at [using the] Digital Bridge Institute in Oshodi which is bigger,” he points out.

He shows me pictures from the classes on his portable laptop. Every one of them is full. In some, the class spills all the way to the back so that a handful of students are standing. These are the pre-university classes which hold every Monday and Thursday.

For the bootcamps, which selects about 150 applicants from a Kaggle competition, participating entries sometimes reach a thousand.

To avoid being caught in the Lagos bubble, the organisation’s AI Invasion programme spreads its gospel widely. This year, the programme went to 30 Nigerian cities including Ilorin, Sokoto and Awka, spending five days in each city and leaving each class a copy of the AI Knowledge Box to help them sustain their learning.

There are also AI+ Clubs in school campuses from the University of Lagos to the Ahmadu Bello University in Zaria, for undergraduate students to develop their skills outside of their regular curricula. And on Saturdays, professionals from various sectors – oil & gas, banking, FMCG – gather for practical classes on how to use AI to impact their bottom lines and business operations.

More recently, Adekanmbi says the organisation and its 10-man staff have begun consulting for multinationals and are in the process of increasing their staff strength to cater to more of these requests as they come through the door. On the one hand, it opens up internship and practical training opportunities for young individuals in the field, and on the other, it will provide a revenue stream to continue to support the organisation’s activities.

“We are very heavy on expenses,” he says, “for example, without boasting, we send more students to international conferences than any university in the country.”

“We must increase our inflow beyond relying on grants and sponsorships.”

Going down into the trenches

Adekanmbi does not deny growing up privileged. And he acknowledges how that has afforded him quality of education and professional exposure over the years. Having studied Biochemistry at the University of Reading and followed up with a Masters in Business Administration, Adekanmbi started out working as an analyst at a DNA lab strengthening his skills in data analytics. His friends thought his skills were best put to use in the marketing sector and in 2001, he was introduced to a company called 1-2-1, a Nigerian data-based marketing company which at the time, was collecting massive data for big companies in Nigeria, primarily smokers’ data for British American Tobacco.

In 2009, he would join telco giant MTN South Africa as head of analytics and strategy.

“I always consider myself as someone who has been very privileged in terms of education and in terms of professional exposure working in South Africa and Nigeria working with the biggest telco on the continent and being the head of analytics,” he says.

The idea to start Data Science Nigeria came sometime in 2015. He was on a scholarship and two-year break from MTN to complete a PhD he had begun in 2012 and for which he had been shuttling between Lagos and London.

“It was a moment of introspection and reflection, a lot of forward-thinking. I saw the opportunity to bring my industry experience of over 20 years, my academic experience and my hands-on skill (I do Kaggle every day) and to help build the future.”

Upon his return in October 2016, with a new role to drive transformation and innovation in the country as Chief Transformation Officer at MTN Nigeria, he started DSN a few months afterwards.

“I strongly believe that in shaping the Nigeria of the future, all of us who have been privileged in terms of world class education and work experience, must go into the trenches and address the challenges we are seeing in our society,” Adekanmbi stresses.

“You cannot be high up there and be insulated from reality.”

According to Adekanmbi, only practical solutions to the country’s and the continent’s most dire challenges spell hope for the future. Under its AI for Good program, the organisation has developed an AI system that can detect class participation in school classrooms as well as an application that curates and helps individuals decipher scam messages from individuals posing as bank representatives. The algorithm won the organisation the 2nd best Poster [research paper] at the just concluded DeepIndaba.

Leading innovation at one of Africa’s largest telcos comes with its own learnings and strain but having to combine the enormous responsibility of this role with running almost daily operations at DSN would’ve been impossible without the support the company has provided him since the organisation began its operations less than 3 years ago.

I am the future

At the Commonwealth Business Forum in April 2018, Nigerian President, Muhammadu Buhari had said, in front of a global audience, that Nigeria’s young people who now make up a large percentage of the population, majority of whom haven’t received an education are “claiming that Nigeria is an oil-producing country and therefore should sit and do nothing” but receive free benefits.

The outrage was unmatched. How dare the president call the country’s young population withstanding rising unemployment rates and dwindling quality of education, lazy? But since then, the lazy card has been dealt again and again, and it is worrisome when you consider the future of the country rests in some way, on its under 30 demography now said to comprise more than half of the country’s 182 million people.

As someone who works very closely with the youth population, Adekanmbi says there is a lot of raw talent that he has seen but societal systems that can glean the best out of them are lacking.

“This is one thing that keeps me awake at night and drives the vision of Data Science Nigeria,” Adekanmbi says. You see it in the ones who go out of their way to learn outside of the outdated curricula being used in their universities or the ones who are learning to code without having even gone to school.

“Even the bad boys whom they say are doing ‘yahoo yahoo’ [internet fraud], yahoo yahoo requires some level of intelligence. So there’s something there,” he adds.

“If you create a better system that can turn these guys into cybersecurity experts, we would have done better for ourselves.”

You cannot talk about a field like AI or ML and not have the conversation around gender bias both in practice and personnel.

“In our kiddies class, we are seeing balance. In our last summer class, we had a 45:55 female to male ratio,” Adekanmbi says. But by the pre-university level, it changes to 20:80 female to male.

The Kaggle competitions show a meagre 5:95 female to male ratio. DSN is consciously and proactively making efforts to include more women in its programmes and to continue providing friendly and encouraging spaces for women to thrive in the field. A ‘Best Female Data Scientist’ award will be handed out at the end of the bootcamp this year in partnership with one of the programme’s sponsors.

“That’s why we are excited about one of our students at Ahmadu Bello University Zaria, Zainab Ishaq Musa, who against all odds came to the bootcamp and rose through the ranks,” he says.

“We need to see more women in the forefront. The more we create platforms that celebrate women who go the extra mile in traditionally male fields, the more we encourage more women to want to do that.”

On the other hand is the worrisome and growing trend of racial bias of AI systems across the globe, “AI-powered discrimination”, according to Adekanmbi. Globally, he is of the opinion that there are talks and moves to increase fairness, accountability and transparency in the building and deployment of various models taking into account and properly disclosing any limitations they may have. While a lot of big data companies like Google, IBM and Microsoft have launched a lot of data fairness test solutions, it is, however, more critical that Nigerians and Africans as a whole work towards increasing their own representation in places where it matters.

“We can’t wait for people to say I don’t have Nigerian data, somebody’s got to collect it. So we’ve built an application that allows people to collect various kinds of data available for scientists to use.”

Still, due diligence in building sensitive AI-powered systems is to ensure that data sources are as comprehensive as the problems they hope to solve.

Faith is a central part of Adekanmbi’s life, practical faith that drives his sense of commitment and responsibility to the world around him.

“If  your future only includes you, it is too small.”