In Lagos, Gokada and MAX.ng riders take to the streets to protest “okada ban” 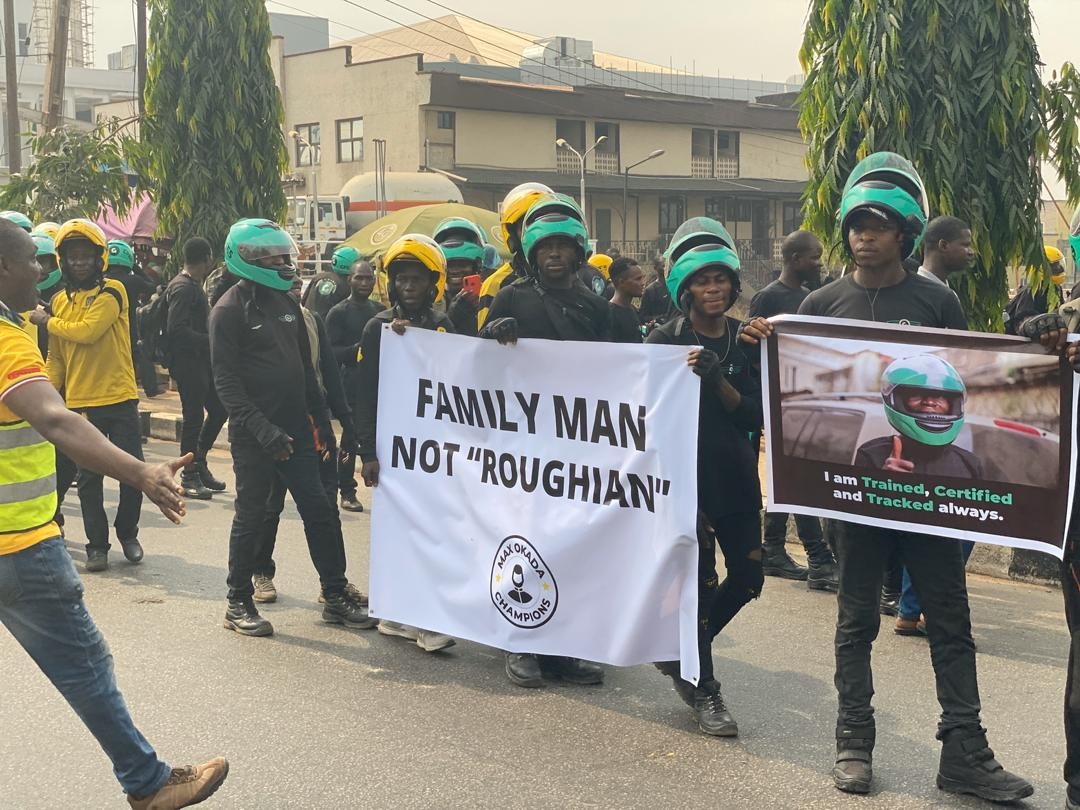 A group of Gokada and MAX.ng riders in Lagos are having a rally to protest a ban on commercial motorcycles

The Lagos state government announced a ban on motorcycles and tricycles across the state on Tuesday, January 28, 2020. In addition, government officials say the ban will affect players in Nigeria’s mobility sector.

Although the mobility sector is in its early stages, the ban could mean the end for major players like MAX.ng, Gokada as well as ORide.

Yet, the people who will be most affected by the ban are the bike riders in the sector.

Today, January 31, 2020, bike riders held a rally in Ikeja; headed to the Lagos State Secretariat, to protest the ban, urging government to regulate the sector instead.

While MAX.ng and Gokada riders were at the rally, ORide says they will release a statement before February 1.

The stakes are high: the ban, if it goes in place on February 1, will shut down the mobility sector. While there are legal questions on the ban, the government refuses to back down.

In an official communication from the government’s Twitter page, they provide some reasons for the ban. High incidents of road accidents, security and safety are some of the reasons given.

According to Dr Taiwo Salaam, the permanent secretary at the Lagos State Ministry of Transportation, okadas have killed over 11,000 people since 2011.

A cursory look at the numbers

The State commissioner for information, Gbenga Omotoso said that “statistics show that 600 lives were lost due to Okada and keke related accidents between 2016 and 2019.”

Yet, data from the Nigerian Bureau of Statistics in Q2 2018 show that motorcycles are not responsible for the most accidents in Nigeria.

In fact, one of the ride hailing platforms, MAX.ng, claim that in 2 million trips, they have not recorded one fatality.

Instead, services like Gokada, MAX.ng and ORide who insist on protective helmets for all passengers improve safety on the roads.

TechCabal reached out to MAX.ng to find out their drivers’ demands.

Affecting the livelihood of 800,000 people

“While the company is not involved in the rally, the drivers whose livelihoods are at stake want to communicate with the government”

“We’ve always engaged government and our position has been that the government should regulate the sector” Chinedu added.

Lagos state says there are over 800,000 motorcycle riders in the state. It raises the question of how these people will make a living.

Yet the state says the riders should turn to trade skills like plumbing, painting and printing.

But the government leaves out details like the health and accident insurance the drivers receive from these companies.

For commuters in areas with bad roads, it will mean that commuting will get difficult. But the government admits it has no alternatives to motorcycles and tricycles.

Yet, in the end, one thing is clear, the government has always been suspicious of the mobility sector.

A spokesman for the ruling party, All Progressives Congress, Joe Igbokwe hinted at the ban in a Facebook post on August 2019: “Instead of partnering with govt on BRT, you invested “5.3 million dollars” in okada business and expect that Lagos state will allow you jeopardise its muliti-billion (sic) naira mass transit investments.”