Digital Nomads: A Nigerian CIO in Afghanistan, the country with two Presidents 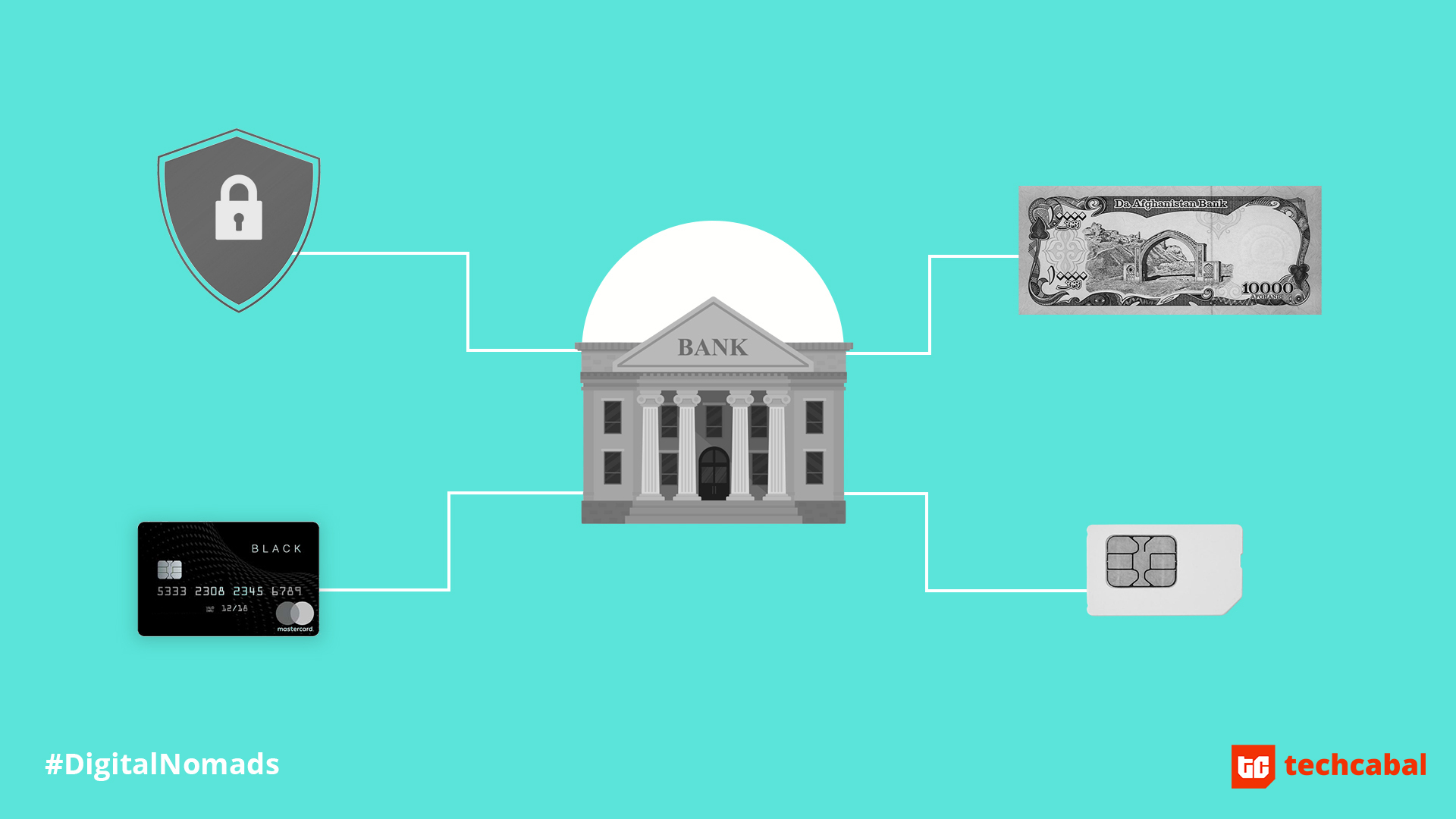 Digital Nomads Afghanistan: today we’re in Kabul, a city that’s reputed to be one of the most dangerous in the world. What is the actual experience like?

The idea that Nigerians are the happiest people on earth is a myth. But one anecdote which still holds true is that, wherever you are in the world, you’re certain to find a Nigerian.

Every week, we talk to Africans who leave their home countries to live in some of the more interesting places in the world. Somaliland, China, Saudi Arabia and even Chibok are some of the places from where people have shared their experiences.

Today’s Digital Nomad, *Vincent tests the idea of how far people are willing to go and sheds light on the city of Kabul, Afghanistan. It’s not a city you’ll find tourists falling over themselves to visit.

But Vincent is no tourist. He has lived and worked in Afghanistan since 2016. When we find time to speak on a Zoom call, my first question is something you can guess. How does one decide to up and go to Afghanistan?

“I used to work in a bank in Nigeria,” Vincent tells me. “My field used to be cyber security. While doing my job, I was headhunted for a consulting role. The role was based in Dubai as well as Kabul.”

He says he did not have any fears about taking the role. “I needed to take a bold step with my career and I needed to do something new. Besides, when I looked up the firm, there were a lot of expatriates there as well.”

Yet, it is one thing to have a heart of steel, and another thing to tell your family and friends you’re moving to Kabul.

According to Wikitravel: “travelling in Kabul is extremely dangerous and strongly discouraged. The current Afghan government has little control over Kabul which is effectively a war zone.”

So Vincent did the practical thing. “I didn’t tell anyone I was moving to Kabul. All I said was that I was going to work for an Afghan company based in Dubai.”

With his white lie in place, he left his friends and family in Nigeria to start a new chapter shuttling between Kabul and Dubai.

Kabul is 11 hours from Lagos, and if you arrive in February, you should be wearing something thicker than a light sweater.

“I landed at the Hamid Karzai airport on February 21st and it was in the middle of winter. I always thought Afghanistan was hot so it was surprising that the weather was – 5 degrees.

Away from the weather, how did his experience of the airport in Lagos compare to the Hamid Karzai airport?

“The Murtala Muhammed international airport is the worst airport in the world. It is not about the structure, it’s how difficult everything is. In Lagos, you are frustrated from when you check-in. When you clear immigration, there are more questions waiting.”

He describes having a hard time with the commotion at the Lagos airport. “In Lagos, you’re never sure of flying until you actually fly.”

While the Kabul airport is almost the same size as the MMIA, Vincent says that’s where all the similarities end.

“The Hamid Karzai airport is so organised. Even with the extra security and checks, there’s a sense of calm. There’s Wi-Fi, a nice VIP lounge and unlike MMIA, all the officials wear uniforms.”

Vincent’s ranking of his favorite airports: Changi airport, Singapore for its waterfalls, trees and abundance of sitting areas. San Francisco airport for its unusual square runway which puts the terminals in the middle. The Dallas airport because of its placed food court.

If you’re headhunted for a consulting job and you move halfway around the world, buying and registering a SIM card isn’t something you would have to do yourself. In Afghanistan, the leading GSM providers are MTN, Roshan, AWCC, Etisalat and Salam telecoms.

Roshan is the country’s leading telecommunications provider, but Vincent says that this is because the company does little compliance. “AWCC and MTN are strict, they need you to register before you get a SIM card but everyone can get on Roshan.”

We talk about privacy and data regulations for a while before we touch on city life in Kabul, and how different it is from Lagos, Nigeria.

Vincent’s note: I have always lived in Lagos where it’s humid. The first thing I had to get used to was the weather. Afghanistan is a mountainous country that is averagely 6000 feet above sea level.

In Kabul, the people are generally friendly and are hospitable. There’s a saying in Afghanistan that if you’re invited to someone’s house, you can never be asked to leave.

But there’s not a lot Vincent can tell you about what life is for the ordinary person in Kabul. He is an expatriate in a city that’s on the edge. That means he lives near his office and he does not go out without a security detail.

There’s good reason to be cautious in Kabul. “Things change pretty fast here. It could be uneventful for two months and in the next week, there’s a lot of activity. Earthquakes are also common here.”

My note: Afghanistan is situated in a geologically active region of the world with the constant threat of earthquakes. A 5.5- 6.0 magnitude earthquake is considered normal in Afghanistan.

But apart from earthquakes, there are security concerns. In March 2018, a series of explosions near Vincent’s office became his closest call.

“There was an earthquake in the morning and around noon, there were multiple blasts close to the office. We went to the safe room and eventually had to sneak out of the back door to safety.”

One of his colleagues was so shaken by the incident that he left Afghanistan the next day with no plans of returning.

As the Chief Information Officer of a major bank in Afghanistan, these security concerns are a big part of why Vincent’s job is tricky. Attacks on base stations across the country are fairly common.

“Many of the problems here are similar to Nigeria: internet penetration, illiteracy and government policies.”

“My bank is supposed to be a market leader but electronic banking is still a hassle. There’s no SMS banking or mobile banking.”

My note: In 2007, Roshan partnered Vodafone to launch M-Paisa, Afghanistan’s version of M-Pesa.

Yet, a lack of trust ensured that M-Paisa did not catch on as expected. One of the issues is the country’s regulatory environment. Because of various sanctions and regulations, only one bank in Afghanistan can clear U.S dollars officially.

“There are 14 banks, 4 of them belong to the government and the remaining are private. The banks don’t trust each other because some do not do their due diligence. This lack of trust affects inter-bank transfers.”

It takes a minimum of one-day to make a bank transfer. First, the bank has to screen the customer as well as the receiving account before the transfer can go through.

“The Central Bank has to be blamed for some of these things. They often copy foreign solutions, but they have been unable to localise and enforce many of these solutions.”

Vincent’s thoughts on payments in Afghanistan: It’s a cash economy. The Hawala system of money transfers is what the people trust because you can give cash to a Hawala agent and it’ll be received by someone else through another Hawala agent. It is the only type of instant money transfer in Afghanistan and people use it to avoid bank screening.

In the end, Vincent draws parallels between Afghanistan and Nigeria. There’s a youthful population but also youth unemployment because many of the young people are unskilled.

Because of the war in Afghanistan, many young people have either died or are without quality education. Where the young people are educated, their career path is to work for an international NGO until they receive an SIV- a type of Visa that allows them leave the country.

“They have an opportunity with the youthful population but the problem is violence. There’s almost always some type of conflict: right now the country has two Presidents.”

“There’s a saying that if there is only one Afghani left in the world, he’ll use his feet to hold a sword and wage war against his hands.”

In the end, Vincent ranks Kabul a 1 on a scale of 1-10 for his tech experiences while Lagos receives a 6.

*The name of the subject has been changed at his request

*If you want to share your story, please send me an email at muyiwa@bigcabal.com