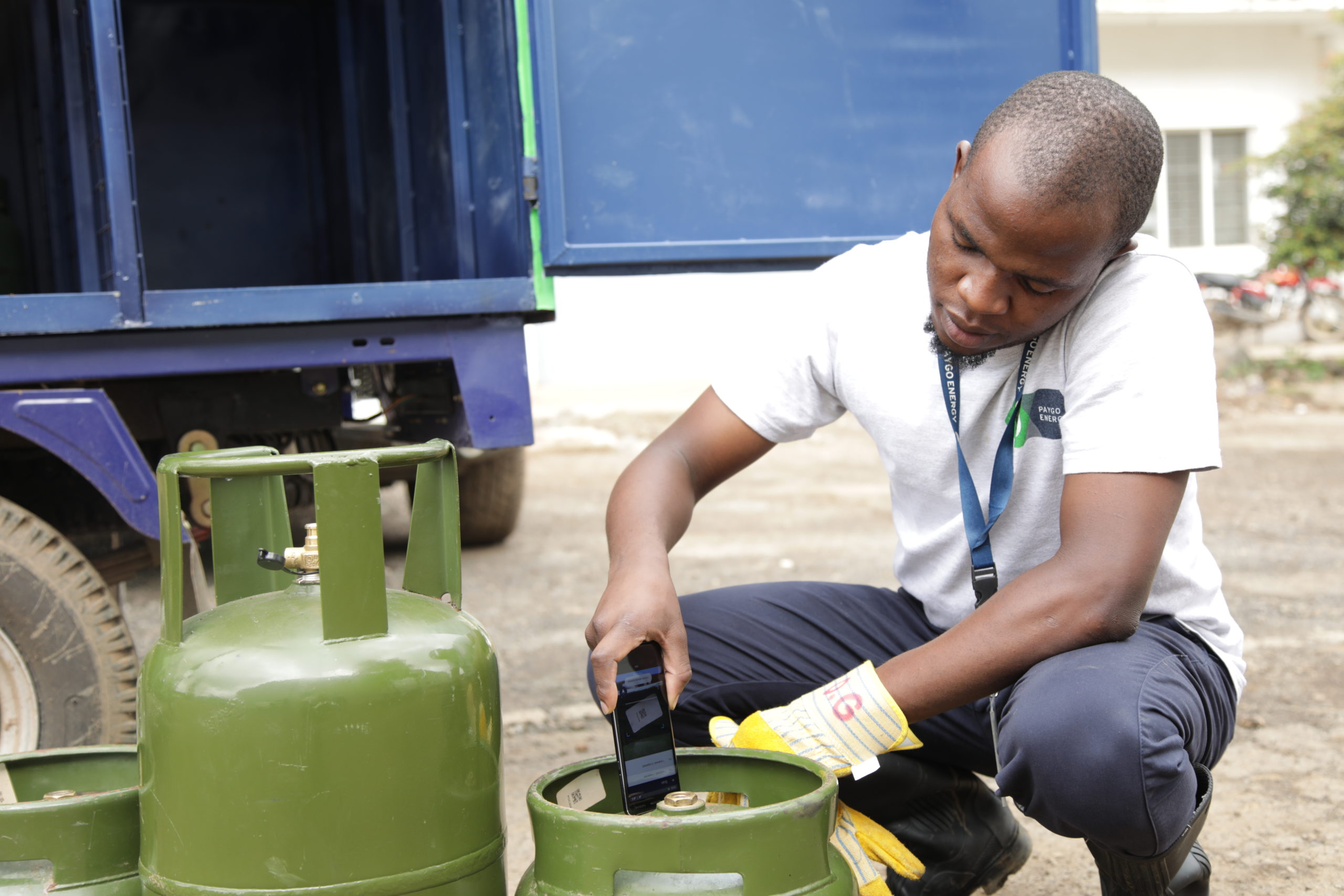 When it is near midnight and you have a partially parboiled pot of rice on the stove, running out of gas can trigger the five stages of grief.

You don’t believe you have used that much gas in just one month, but you’re mad at the cylinder manufacturer for not making the thing transparent. You tilt and shake the cylinder, try to wish away the hunger, ultimately consoling yourself that this too shall pass (or as I told myself when my parents visited last August, it’s not that deep).

Some people avoid an encore by keeping a calendar on their gas consumption, which can be efficient to the extent that your cooking doesn’t spike in strange times. Cue public health lockdowns and frequent impulsive visits to the fridge.

Tech to the rescue

At PayGo Energy, a Kenyan startup founded in 2015, the solution is to trust technology and chill.

Their main product is called a Cylinder Smart Meter, a patented portable device to help households monitor and manage consumption, and for gas retailers to extend reach and track distribution metrics.

Using its tech, PayGo mediates a gas home-delivery process that aims to build a close relationship between supplier and consumer in the low-margin business of gas retail in which there isn’t much room for suppliers to differentiate.

With your cylinder connected to a cloud service and your mobile phone, the distributor will know when you are about to run out, informing you that an agent is nearby and ready to visit and refill. It’s an application of the so-called Internet-of-Things subset of emerging technology.

Ashley Berman, PayGo’s lead on strategy, calls it a gas-as-a-service offering, adding to the list of “as a service” possibilities that mobile technology facilitates in Africa. After four years in Nairobi, Kenya’s capital, the startup has gotten the interest of a major trans-national distributor to scale beyond Africa.

In partnership with Saisan, a Japanese company, PayGo will expand operations to Asia, starting with Vietnam and Bangladesh.

Located in a city about 40km away from Tokyo, Saisan is a 75-year-old conglomerate offering various household essentials from gas, electricity and water, to vegetables and furniture.

Under its ‘Gas One’ brand, Saisan sells and supplies LPG (liquefied petroleum gas) in Japan to households, medical facilities and industries. Besides Vietnam and Bangladesh, Saisan has downstream investments in Mongolia, Indonesia, Cambodia, Nepal, Thailand, Laos and India.

These could be potential markets for PayGo depending on the success achieved in Vietnam and Bangladesh.

As with Kenya, these countries have substantial informal economies whose households have need of pelletized pricing plans for essential utilities. About half the population in Vietnam have no bank accounts but the State Bank of Vietnam (SBV) submitted a mobile money pilot proposal to the Vietnamese government last August, a move that could liberalize access to digital services for small-scale earners.

PayGo co-founder and CEO Nick Quintong says Asia has a “huge untapped demand” and that Saisan gives them a trusted brand with generations of LPG retail experience.

On the shoulders of giants

Saisan’s Gas One retail network gives PayGo access to households in the pilot countries some of whom are familiar with buying utilities in small portions. The strategic partnership has a financial aspect too with the corporation investing capital in PayGo’s broader plans to expand into Asia, including a Series B round that has kicked off this month.

A $3.5 million Series A followed in August 2018 led by Energy Access and Novastar. PayGo invested these funds in commercializing the smart meter prototype and going to market in Kenya.

According to Berman, the average Nairobi household using PayGo consumes over 4kg of gas per month. Some families are cooking more than usual, thanks to children who could have been in boarding houses now staying at home due to coronavirus lockdowns.

But 85% of payments on the platform are less than $3, with the average top amount being $1.

The numbers speak to PayGo’s target of providing LPG to the mass market, particularly to households that need clean cooking fuel to replace kerosene and firewood stoves.

Due to its very low environmental footprint, LPG adoption in developing countries can improve public health and reduce air pollution. But households most affected by these ills often can’t afford associated costs.

With the meter, households are able to pay for gas in the amounts they need using familiar payment means like mobile money. A gas top-up via MPesa is a popular among PayGo users in Nairobi, Berman says.

The startup’s business model in Kenya rests on partnerships with gas distributors. None of them are on the scale of Saisan’s capacity however, and the startup believes this sort of engagement with trans-national distributors is the path to scale in fast-growing emerging economies.

In 2019, LPG demand grew by 9% in Africa and PayGo wants to expand across the continent where there is also an unmet demand for clean cooking fuel, Berman confirms to TechCabal. But the opportunity to test the product overseas is an important way to demonstrate capacity for scale should a big corporate become interested in Africa.

A crucial player in PayGo’s move to Asia is Kepple Africa Ventures, an investment firm backed by the Japan Startup Immersion Program that helps startups raise funds from Japanese corporations and potentially sign partnerships with them.

The firm says it has made 52 investments across 8 African countries since December 2018. Some of its portfolio companies include Sendy, Lifestores Pharmacy, Decagon, Termii and Carry1st, the South African gaming company that closed a $2.5 million seed round in May.

PayGo may not fundamentally change how households consume gas in terms of volume, but they are already shaping the global future of LPG metering.

In October 2019, the Kenyan Bureau of Standards launched the world’s first technology standard for LPG metering, with PayGo’s meter acclaimed as the first fully compliant one in the market. The startup’s device also conforms with ATEX directives – a European Union safety certification required of explosive equipment.

Takehiko Kawamoto, Saisan’s president & CEO, describes PayGo’s tech as a pioneering innovation. He’s relishing the opportunity to use it as a vehicle to further drive Saisan’s gas service in Asia.

As at 2018, Ghanaians reportedly consumed 4kg of LPG per capita. It was 9kg in Senegal. Nigeria’s 1kg per capita is relatively small considering it exports domestic cooking gas. However, Africa appears viable for mainstream tech-driven retail gas delivery options in the form of this PayGo-Saisan partnership. It shouldn’t take long before this seemingly necessary market blooms.